No security, no press coverage during commute, Panelo vows 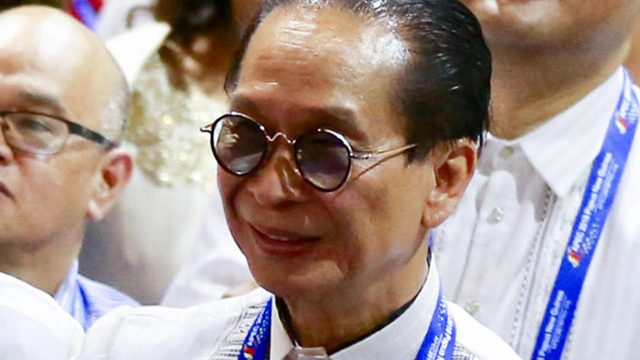 MANILA, Philippines – Presidential Spokesman Salvador Panelo promised his October 11 commute would not involve a security detail and a gaggle of press, but declined to tell media what time he would travel and from where.

“I’ll just do it on my own,” said Panelo on Thursday, October 10, during a Malacañang news briefing.

He said he rejected requests of reporters to accompany him so they could cover his experience.

(As far as I know, no media coverage. Many wanted to come but I rejected all of them.)

Reporters said media coverage of his trip would prove if his experience would be as close as possible to the daily sufferings of Filipino commuters – whether or not he commuted during rush hour, or whether or not he received special treatment.

But Panelo was confident that someone would recognize him, take photos or videos, and post online to inform the public.

To ensure no media coverage, he would give “no hint” of when he would begin his commute and which train stations he would board from.

Asked if he at least planned to commute during rush hour, he said, “Basta, secret.”

Panelo claimed he was familiar with taking public transport because he would resort to this option whenever his driver was not able to report to work on time. He did not specify what kind of public transportation he takes.

The last time he commuted was two months ago, he said.

On Thursday, Panelo said he would take a jeep and train to Malacañang from his home in Marikina. Three LRT2 stations – Santolan, Katipunan, and Anonas – are not operational due to a fire.

Panelo usually holds a press briefing in the Palace on Fridays, around 11 am or 12 noon. Will he make it on time if he takes the public transport?

The spokesman made a controversial suggestion to harried commuters last Tuesday.

“If you want to go, arrive early in your destination, then you go there earlier,” he had said.

What happened when Harry Roque commuted? Harry Roque was the last Duterte spokesman to commute in response to public outrage over mismanagement of transportation facilities. His MRT3 and LRT1 trip in November 2017 was criticized for further inconveniencing  passengers because Roque allowed media to tail him the entire time and even granted interviews while on the train.

Roque himself interviewed train passengers and allowed media to take footage of him doing so. Months later, he would announce, first his senatorial bid, then a bid for a party list seat in Congress.

There was also special treatment for Roque since LRT1 security personnel would step out of the train carriage at every stop to prevent passengers from overcrowding the then presidential spokesman.

But Roque claimed then he was not aware of the security guards’ actions.  – Rappler.com