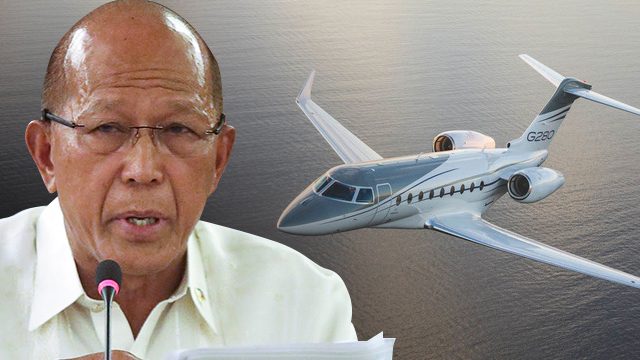 MANILA, Philippines (UPDATED) – It’s not a luxury aircraft but part of efforts to modernize the Philippine military.

Defense Secretary Delfin Lorenzana on Friday, October 11, issued a statement defending the planned acquisition of a Gulfstream G280 business jet worth about P2 billion for the Philippine Air Force (PAF), saying the purchase was “a necessary component of the AFP modernization program for command and control of our Armed Forces on air, land, and sea.”

Some sectors considered the plan extravagant given budget cuts suffered by other government agencies offering frontline services to the public.

Lorenzana clarified that the aircraft was not intended to be a presidential plane. “Will the President be using it? As the Commander-in-Chief all assets of the AFP are at his disposal when he needs them,” he added.

The defense chief said the plane was meant to enhance the technological capabilities of the PAF, with the aircraft seen as “necessary for a 24/7 real-time command and control, especially during crisis situation.”

The military does not consider it a luxury aircraft, he said.

Lorenzana added that the plane would be operated in line with command and control platforms the country currently has and plans to acquire in the future.

He also pointed out the jet would allow for mercy flights to transport ill or wounded civilians and soldiers to hospitals. It could also be used by high-ranking government officials and Cabinet secretaries for official trips around the country as they perform diplomatic and humanitarian initiatives with other ASEAN neighbors.

The plan to purchase the aircraft was approved by Lorenzana on November 29, 2018. It is expected to be delivered in 2020. – Rappler.com