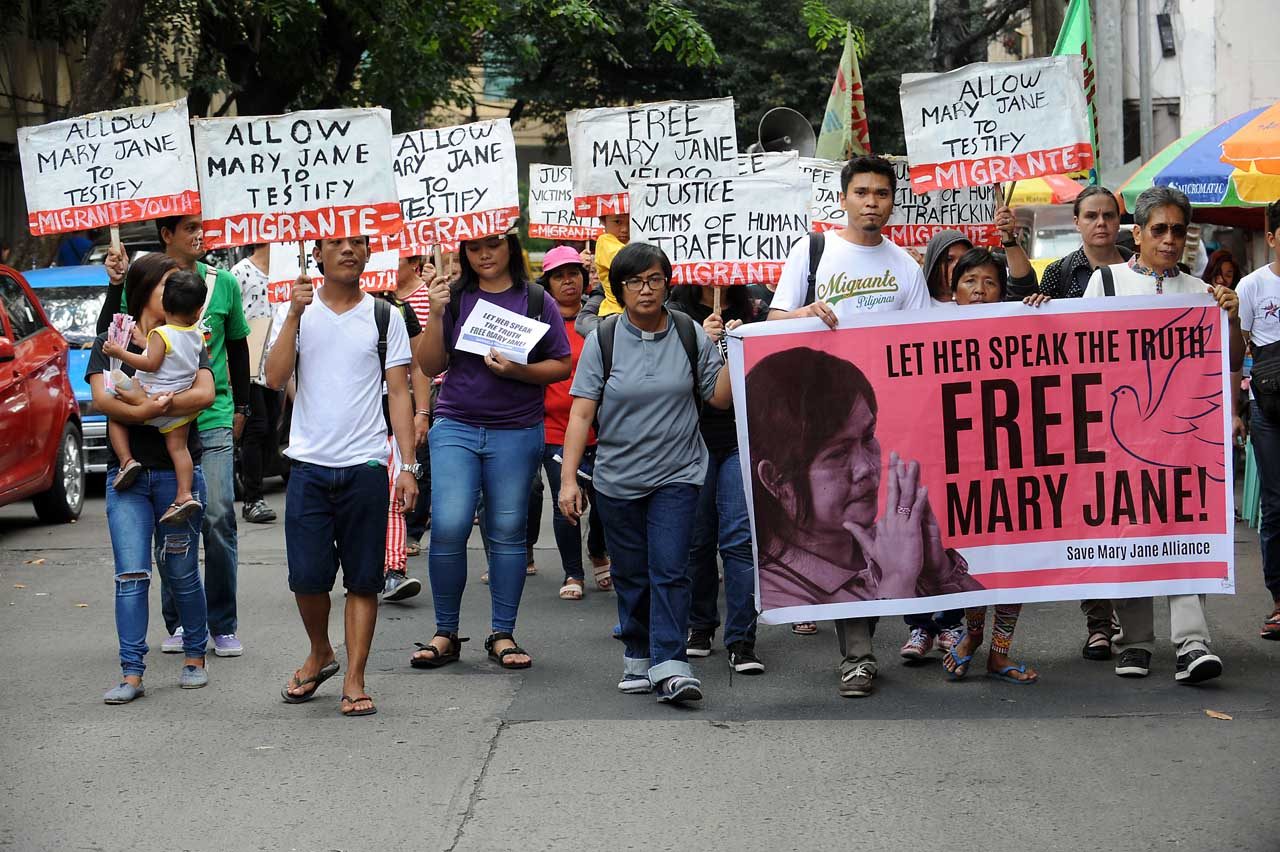 MANILA, Philippines (3rd UPDATE) – In yet another 11th-hour rescue of the incarcerated overseas worker Mary Jane Veloso, the Supreme Court (SC) ruled to allow her to testify via a deposition in a local trafficking case against her recruiters.

“The Supreme Court has allowed the taking of the testimony of convicted drug trafficker Mary Jane Veloso against her recruiters by way of deposition in Indonesia,” said the SC’s Public Information Office (PIO) in a statement on Friday, October 11.

This last-minute decision by the High Court would give Veloso the chance to tell her story in a bid to convict alleged recruiters Ma. Cristina Sergio and Julius Lacanilao for human trafficking. (READ: The story of Mary Jane Veloso, in her own words)

Veloso’s lawyers, the National Union of Peoples’ Lawyers (NUPL), hope this can play a significant role in removing her from death row in Indonesia for drug trafficking charges.

Veloso has repeatedly claimed she was duped into carrying to Indonesia a luggage with heroin stuffed inside, over which she was put on death row but given reprieve to give way to the trial in the Philippines.

The Nueva Ecija Regional Trial Court (RTC), where the trafficking case is pending, has given the prosecution only until October 28 to secure a ruling that would allow Veloso to testify via a deposition. October 28 was already an extended deadline; without this SC ruling, the prosecution would have been forced to present as witness a consular officer who had talked to Veloso before.

The Court of Appeals (CA) had blocked this deposition twice, citing the rights of the accused to confront Veloso face to face. The SC reversed the CA.

“The Court said that to disallow the written interrogatories will curtail Mary Jane’s right to due process,” said the SC.

The SC added: “Her imprisonment in Indonesia and the conditions attached to her reprieve denied her of any opportunity to decide for herself to voluntarily appear and testify before the trial court in Nueva Ecija where the cases of the respondents of illegal recruitment were pending.”

The ruling was issued by the SC Third Division, and was penned by Associate justice Ramon Hernando.

Veloso’s deposition will be taken from her jail in Indonesia, with the presence of Philippine consular officers.

The lawyers for Sergio and Lacanilao can send in their questions for Veloso.

Veloso was sentenced to death in Indonesia in 2010, and would have been executed in 2015 with a shot to the heart had it not been for Indonesian President Joko Widodo’s reprieve. More than 3 years since her second shot at life, her fate remains uncertain.

The NUPL hopes a victory in this local case “may pave the way to a possible permanent reprieve, pardon or amnesty, or even commutation of service by the Indonesian government.”

The CA had used Section 15, Rule 119, of the Revised Rules of Criminal Procedure, which says that if the witness is infirm to appear on trial, he or she can be examined by the court in the presence of the accused.

“In our jurisdiction, in criminal cases, there is no law or rules which expressly allows the taking of deposition upon written interrogatories,” the CA had said.

Overruling this, the SC said: “The CA appeared to have strictly and rigidly applied and interpreted Section 15, Rule 119, without taking into consideration the concomitant right of due process of Mary Jane and the State as well as the prejudice that will be caused to Mary Jane or the People with its pronouncement.”

Rule 23 of the Rules of Civil Procedure allows written interrogatories in civil cases, but the CA said it cannot be applied as it would violate the recruiters’ constitutional rights to “meet the witnesses face to face.”

“In light of the unusual circumstances surrounding Mary Jane’s case, it saw no reason not to apply suppletorily the provisions of Rule 23 of the Rules on Civil Procedure in the interest of substantial justice and fairness,” said the Supreme Court.

“Indeed, basic due process and fair play under the unique circumstances Mary Jane is suffering from tilted the balance.The ruling proved that rules of procedure as in many other cases should subserve substantive justice,” Olalia said.

Olalia said he hopes the SC ruling can help others similar to Veloso.

“We hope that this precedent will contribute to providing succor to many others who will be victims of circumstance and injustice which can all be traced from our economic and social ills,” said Olalia.

“Allowing Mary Jane’s testimony is not only crucial in the successful prosecution of Sergio and Lacanilao, but also sets a precedent in the overall fight against human trafficking and other crimes of similar nature,” said De Lima. – Rappler.com