As Marikina ‘EJK’ victim is buried, his community braces for war Facebook Twitter Copy URL
Copied
Kim Lester Ramos is laid to rest on Sunday, October 13, followed by a motorcade calling for justice. His neighbors know he is innocent. They are prepared to fight back.

MANILA, Philippines – The victim rests, now the community fights back.

Kim Lester Ramos, the “extrajudicial killing” victim in Marikina, was laid to rest on Sunday, October 13. The black hearse carrying him was trailed by scores of people demanding justice for the boy they knew was taken too early and too violently.

Ramos had been shot behind the head by a policeman, identified as Police Corporal Herjonner Soller. According to the cop, Ramos fought to get his gun. As they grappled for the weapon, Soller ended  shooting the young man in the head. Ramos’ friend Lauro Lagarde, however, saw the cop shooting Kim point-blank, with all the intention to kill. (READ: Victim plays dead: In Marikina, a new case of ‘extrajudicial killing’)

Witnesses also saw Kim in the crime scene holding only his handkerchief. But when the police filed a complaint against Lagarde, they attached a grainy black-and-white photo of a hand still lightly squeezing a pistol. They said it was Ramos.

Ramos’ killing came as a shock to a community that has not reckoned with a drug operation killing in their homes. The government has counted at least 5,500 drug suspects killed since the campaign was declared by President Rodrigo Duterte on July 1, 2016. Human rights groups have counted over 20,000 killings from and inspired by the campaign.

Marikina was different, the residents of Mountain View Subdivision believed, until Ramos was killed that Saturday evening. (READ: The Impunity Series)

“All of us are shouting justice now. The Lord is also shouting. ‘Justice!’ One of his commandments is ‘Do not kill.’ We are with God in shouting ‘Do not kill. Stop the killings’,” said Villanueva said in his homily.

Many of them hesitated to go. Just a day before, a police car passed by the wake without any officer speaking with them. While it was their first loss in the so-called drug war, they knew a threat when they saw it.

Kim Lester Ramos, 23, was a loving son and brother. He worked as a construction worker before he was killed. He dropped a post-high school vocational course so he could work with his parents in paying for the school bills of his 5 siblings.

(This is the first time this happened. We don’t see these cases in our area. It just happened now, with my son as victim. My son who is himself kind to the people of his town, was the first victim.)

He added: “Napakabait po ng anak ko. Matulungin sa amin. Maraming pangarap sa mga kapatid. Paano na niya po yun gagawin? (He was very kind. He was helpful. He had so many dreams for his siblings. How can he fulfil them now?)”

Kim Lester Ramos played basketball with many of the men of the subdivision. The neighbors remembered him for his jokes and his contagious laugh at their church community, the Christian Walk Ministry, where he threw a hand in organizing the last liga (basketball tournament). Among the participants were policemen. (LIST: Minors, college students killed in Duterte’s drug war)

On Sunday, the residents of Mountain View donned white shirts printed with Kim’s high school graduation photo. He wore a pristine toga and stared straight at the camera. The photo on the shirt is bordered by bold red capital letters: JUSTICE FOR KIM. 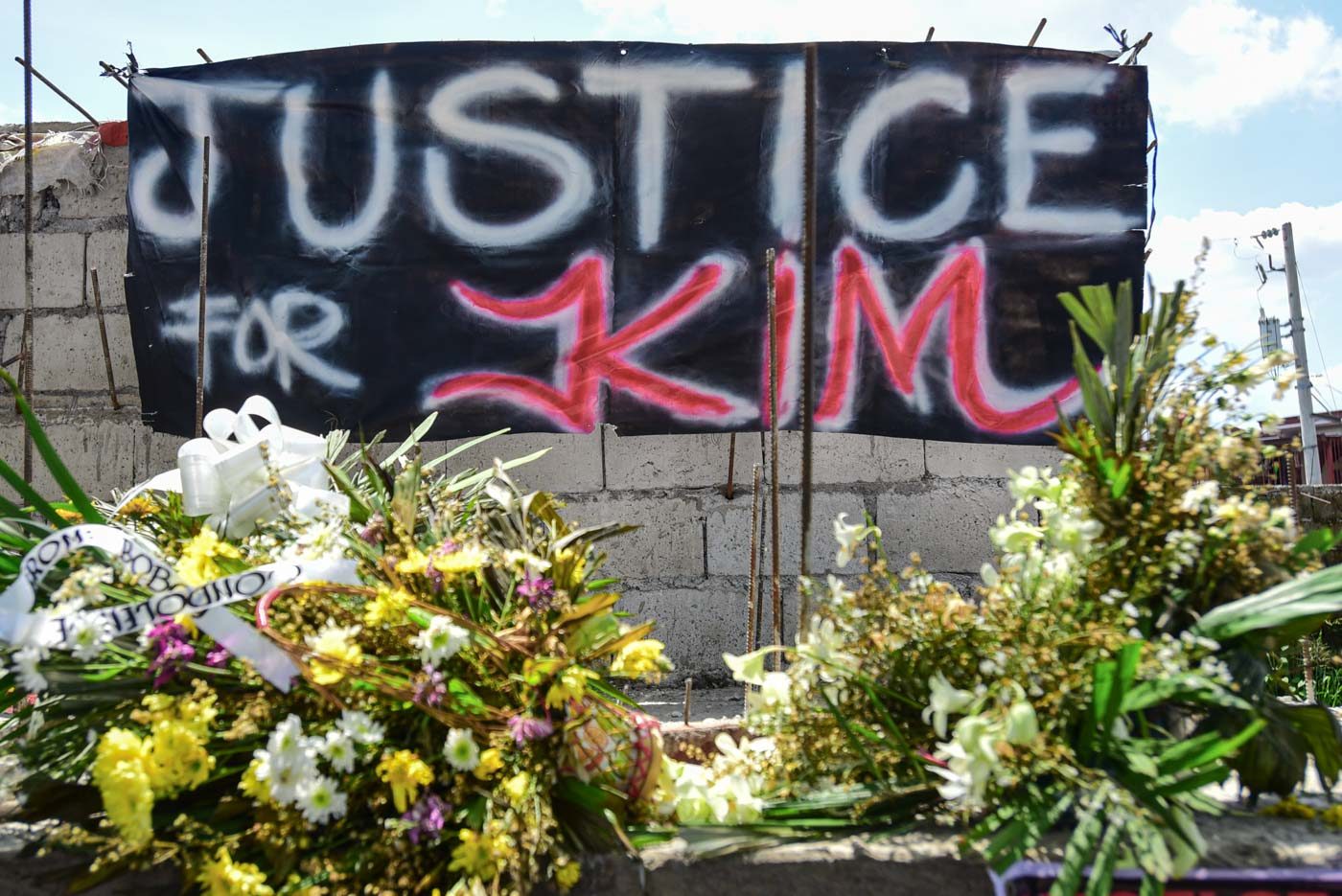 The battle would not come easy for the residents of Mountain View. The first, and so far last time, police officers were convicted of murder in a drug operation was in the case of Caloocan teen Kian delos Santos.

Ramos’ alleged killer, Police Corporal Herjonner Soller, was an intelligence officer before he was placed on floating status over Ramos’ slay. The police have launched an internal investigation, complemented by a probe by the Commission on Human Rights.

Despite the questionable operation, police pursued a complaint against Ramos’ friend, Lauro Lagarde, also accusing him of snatching Soller’s gun and being a notorious robber. Barangay and National Bureau of Investigation clearances obtained by Ramos and Lagarde’s families prove otherwise. Both have no criminal record and have been certified to have been keeping “good conduct” as citizens.

Among the crowd at the funeral is a young man who was teased to look like a smaller version of Kim, complete with the bony frame and big shy eyes. John Martin Ramos, 22, willingly spoke to cameras. He has nothing to hide, he said. John Martin knew his cousin from the basketball court up to their home, where they conquered worlds in Mobile Legends. It was now a real-world battle for a beloved comrade.

“Handa po akong lumaban. Hindi rin naman po ako nag-iisa, madami po kami (I am ready to fight. I am not alone. We are many.)” – Rappler.com