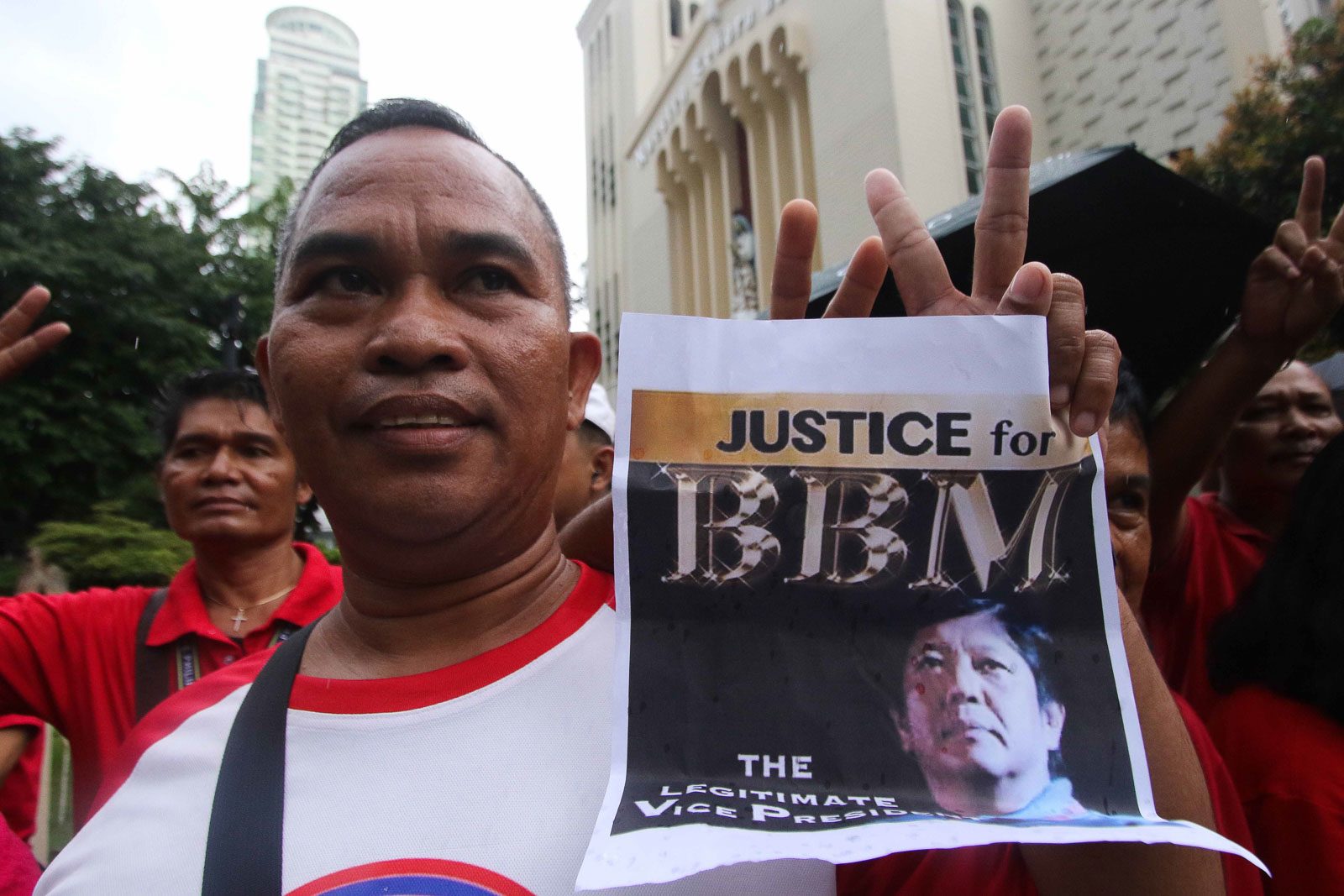 Facebook Twitter Copy URL
Copied
For the Marcos camp, it is a 'positive development' that the PET will now 'deal' with ARMM votes. The Robredo camp says the initial recount win is a clear victory.

MANILA, Philippines – Ferdinand “Bongbong” Marcos Jr called it a “good result” – the seemingly benign action of the Supreme Court to ask for comments and position papers from him and Leni Robredo in relation to the electoral protest he filed against the Vice President.

“Of course [it’s still favorable to me]. Good result,” Marcos said in a press conference on Tuesday, October 15, after the SC, as the Presidential Electoral Tribunal (PET), announced its anti-climactic 11-2 resolution on the case.

The PET was expected to rule based on the results of the recount of votes in Marcos’ chosen 3 pilot provinces, but instead it did these:

Marcos’ lawyer Vic Rodriguez said it was a “positive development” that the PET was now “dealing” with the motion involving the 3 provinces in the former Autonomous Region in Muslim Mindanao (ARMM).

“For the first time after three years, we shall now deal with the issues on the annulment of the election results in the provinces of Lanao del Sur, Basilan. and Maguindanao,” Rodriguez said.

Robredo garnered a total of 477,985 votes in these ARMM provinces against Marcos’ 169,160 votes. If these are nullified, the national count would be reversed in favor of Marcos, with the former senator lead by 45,352 votes.

It is the position of the Robredo camp that Marcos should not be allowed at all to have a technical examination of the election records from ARMM.

The good news for Robredo: dissents in the PET established that there was no substantial recovery of votes for Marcos in the initial recount.

Sources said Senior Associate Justice Antonio Carpio and Associate Justice Benjamin Caguioa dissented from the majority decision because they wanted to dismisss Marcos’ protest altogether on the basis of Marcos failing to recover a substantial number of votes in the recount in the 3 pilot provinces: Negros Oriental, Iloilo, and Camarines Sur.

Rule 65 of the 2010 PET rules says if there is no substantial recovery from the chosen pilot provinces, “the protest may forthwith be dismissed, without further consideration of the other provinces mentioned in the protest.”

Even Robredo’s lawyer, Romulo Macalintal, said the action to require position papers on the ARMM request was already a departure from Rule 65.

“Well, iyon ay talagang masasabi nating (we can really say) there was a departure from the rule on the initial determination of the case under Rule 65. And, of course, in our comment, we might be quoting from the dissenting opinions of justices who believe that the case should be really dismissed outright because of the failure of Mr Marcos to gain substantial recovery,” said Macalintal.

This is also the tenor of the collective statement of minority senators Franklin Drilon, Francis Pangilinan, Risa Hontiveros, and Leila de Lima.

(Why is the Supreme Court seemingly disregarding its own rule, which says the protest should be dismissed if the pilot provinces showed no substantial recovery? When will this case be finished? When the world has turned upside down and the lies have become the truth?)

But Macalintal refused to say the resolution was a win for Marcos.

“It was a win for Mrs Robredo. Panalo si Mrs Robredo because maliwanag na nanalo kami sa recount. Ano ba iyong protesta? (Mrs Robredo won because it’s clear we won in the recount. What is the protest all about in the first place?) The protest is to recount the pilot provinces and it appears that we won,” said Macalintal.

The Robredo camp has slammed Marcos’ ARMM request for supposedly circumventing rules as Marcos would effectively have 6 pilot provinces when Rule 65 clearly says the pilot provinces should not be more than 3.

(Marcos should have chosen those ARMM provinces from the very start. Why did he not choose them? Why did he choose Cam Sur, Iloilo, and Negros Oriental?)

Macalintal said he was looking at the PET resolution as the Supreme Court just observing due process.

“Due process simply means the right to be heard, and the PET gave us our right to due process by asking us to comment on the report,” said Macalintal.

Marcos said he was “frustrated,” but that he would just have to “trust in the wisdom of our justices.”

“It is the first time any presidential protest arrived to this stage in the protest. Maybe after all these, kailangan balikan natin ang sistema natin ng pagprotesta.  The whole electoral system. Tignan natin para mas maging maayos,” said Marcos.

(We need to go back to our electoral protest system. The whole electoral system. Let’s revisit it so we can fix it.) – Rappler.com