MARAWI CITY, Philippines – A 3-storey structure on a patch of reclaimed land here stands with pockmarked walls and gaping holes – grim reminders of the fierce battles that razed the city to the ground two years ago and dislocated thousands of its residents.

It’s the last surviving building on the banks of Lake Lanao because a 260-pound unexploded bomb was found under the structure, preventing contractors from demolishing it even after the so-called liberation of Marawi from its attackers two years ago today, Thursday, October 2019.

On Wednesday, October 16, a military bomb disposal team finally detonated the bomb, causing the damaged walls to collapse and setting off alarms in vehicles parked from a distance.

Workers will be clearing the debris next and soon the entire area will turn into an empty flatland. The private contractor can then move to other areas with damaged buildings waiting to be assessed.

It is hard to guarantee it, but the detonated bomb was believed to be the last unexploded ordnance inside the former battle area that saw massive air strikes during the siege. “We can’t say it’s 100% but we are very very confident to give a level of assurance that it is already safe inside the MAA (Most Affected Area),” said Colonel Irineo Sebastian, commander of Task Force Bangon Marawi’s Joint Task Group Builder.

This means construction is poised to begin two years since the battles in 2017, a welcome development in the excruciating pace of rehabilitation of the former battle area. It is the home to at least 50,000 residents who are longing to come home.

There is still no clear timeline for their return, however, and it is certainly not expected to happen before the New Year.

“We will start already to implement the procurement process, the negotiation process, and the last [stage], which is to award [contracts for] all these project components,” Escalada said.

The collapse of the initial plan to give the task of rehabilitating the entire city to a China-led consortium delayed rehabilitation. The work was instead divided into separate projects or contracts to be implemented separately by government departments and local government units. (READ: Road to Marawi rehab: What caused months of delay?)

The pace of these separate construction projects will now determine how fast or how long residents will be able to finally return to their homes or build new ones.

While the residents will be allowed to begin building new homes or repairing old ones simultaneously, Marawi City Mayor Majul Gandamra said no one will be allowed to live there unless and until public infrastructure and utilities are completed.

“We cannot allow them to occupy their buildings if there is no electricity,” said Gandamra, who won a second term after the siege.

Long process to get permits Government officials are hurting from criticisms over delays in the rehabilitation of the former battle area, saying there has been a lot of work done to build temporary shelters and provide livelihood and training to displaced residents.

Castro said they also need to be strict in the implementation of projects “considering the big amount of money involved.”

A May 2019 nationwide survey shows the government was given a “very good” rating for the rehabilitation of the city, although residents protested this and demanded a city-wide survey to measure the opinion of the residents.

This week, to commemorate the second year of the city’s liberation, Malacañang launched media events to showcase it work.

Resident Drieza Lininding of the Moro Consensus Group called for a boycott of the events.

“There is nothing to commemorate, only pain and our sufferings that continue until today,” Lininding said.

“We don’t feel liberated at all. We are still in a state of martial rule,” Lininding added

The group has been fighting for their immediate and unconditional return to their land and compensation for losses and damages. Lininding said the recovery of areas of the city outside the former battle area is proof the people can bounce back on their own.

But NHA’s Escalada said the government deserves praise. “I have seen a lot of debris clearing in Baghdad, Mosul, Afghanistan and all others. In fact, it took them 7 to 10 years,” he said.

At this point, residents of the former battle area are going through the process of submitting a list of documents before they are given a building permit to start construction or repair of their homes. It includes proof of ownership of the lot and a design plan for the building they intend to construct.

Mayor Gandamra said the local government has been trying to make the process easier for the residents by providing architects to help residents design building plans. He said the city government also granted amnesty to residents who have not been paying real property taxes. 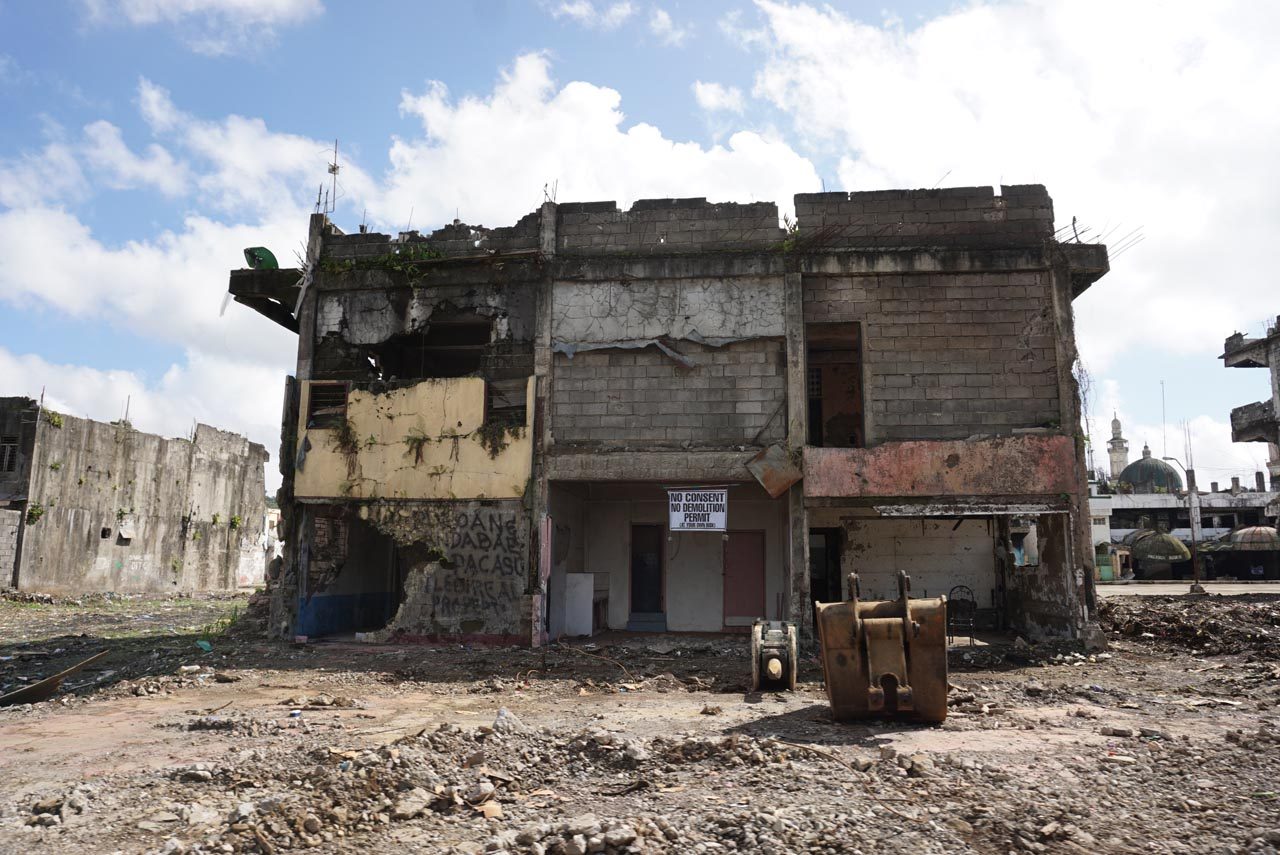 The process to get a building permit is also expected to fix the messy land ownership in Marawi, where many residents do not have official titles for the land they occupy while those who do have titles might find them overlapping with other claims. Government maps are not always reliable.

But the same messy land ownership has fueled widespread insecurity among residents, many of them are afraid the government will take their land to widen roads and other public infrastructure.

Observers said this is why there are residents who are compelled to hold on to their buildings, even those that are probably no longer structurally sound, because they fear it might be their only proof of ownership.

Inside the former battle area, banners saying “No consent, no demolition permit (At your own risk)” hang on buildings in various states of disarray.

Mayor Gandamra said the city will not hesitate to enforce “forced demolition” if experts recommend it. “We cannot allow them to go back na malalagay sa danger ang kanilang buhay. They can also hire their own structural engineer para ma-check ang kanilang pamamahay,” Gandamra said.

And after all the announcements on Wednesday, what looked like a bomb was discovered somewhere else in the battle area. Whether or not this will again delay construction plans remains to be seen. – Rappler.com