This is despite strong opposition from the Agta-Dumagat-Remontado tribes in Quezon and Rizal due to threats of displacement and alleged violations in procedural requirements for ECC application both by its project proponent, the Metropolitan Waterworks and Sewerage System (MWSS), and the Environmental Management Bureau (EMB).

Octavio Pranada, representative of Indigenous Political Structure of Dumagat-Remontado tribes in Tanay, Rizal, said they are disappointed because the process for Free Prior and Informed Consent (FPIC) is not yet completed.

Two more barangays in Rizal will have to complete the FPIC in November. The process allows the Indigenous population to participate in the decision-making process and get consulted before development on ancestral land begins.

By not acknowledging this result of the FPIC process, the EMB disregards the Environmental Impact Statement system’s requirement for a socially acceptable project.

The IP groups also filed a complaint to the EMB about the project proponent’s alleged violations to no avail. The complaint cites the failure to effectively explain the proposed project to indigenous communities, a flawed process of clustering and consensus building, and the alleged bribery of the proponent tolerated by the National Commission on Indigeous People (NCIP), according to a position paper submitted to EMB. 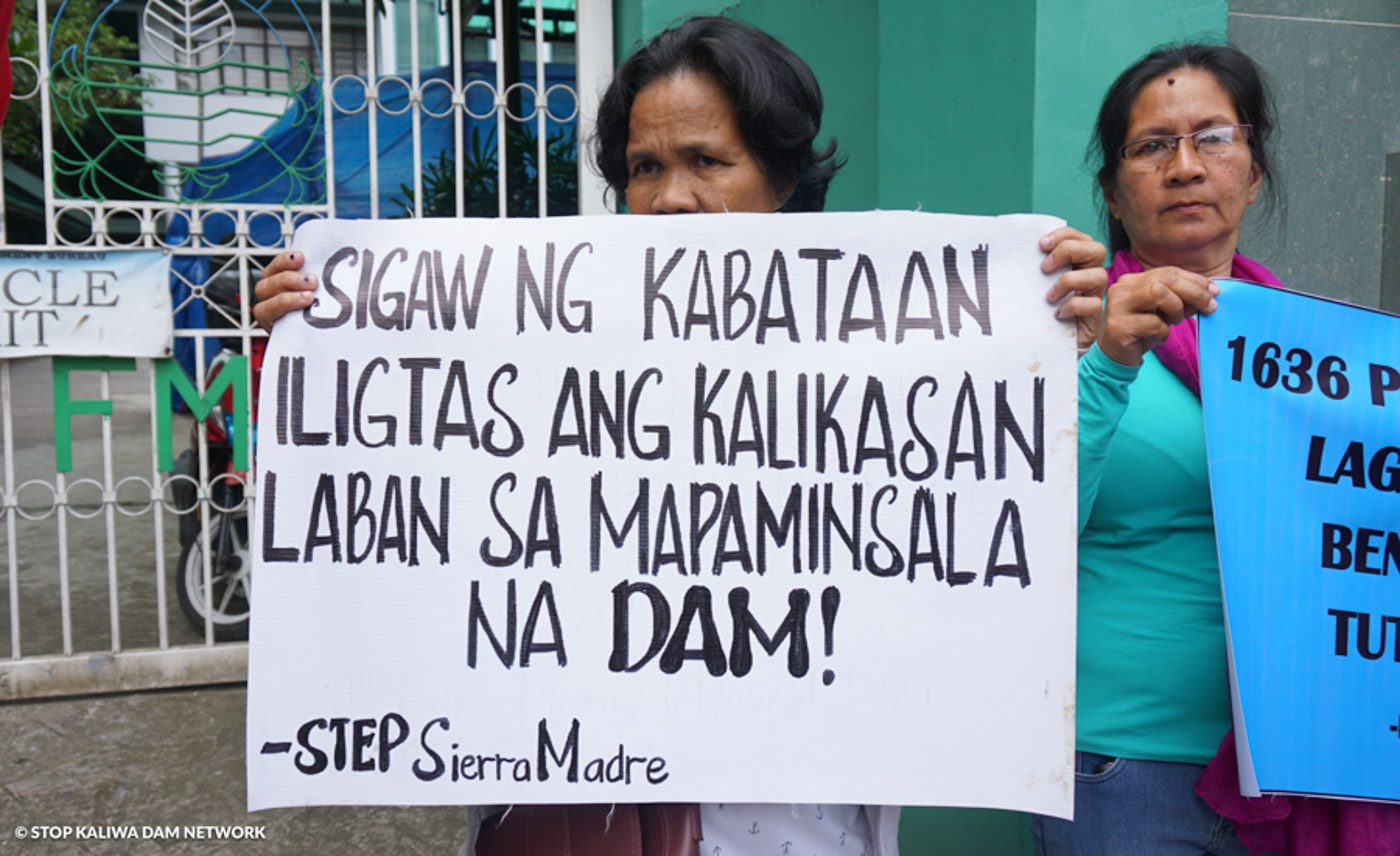 According to the Stop Kaliwa Dam Network, in the executive summary of the EIS report the Kaliwa Dam Project “is now being implemented through ODA with China Eximbank under a design build contract with CEEC as D&B contractor.”

The group said the Kaliwa Dam is an infrastructure project categorized under environmentally critical projects, and it is also proposed in an environmentally critical area covered by Proclamation No. 573 (1969), Proclamation No. 1636 in 1977, and NIPAS law as it is traditionally occupied by the Dumagat-Remontado cultural tribes and endangered or threatened species of indigenous Philippine Wildlife.

This is an expressed defiance of the law, in addition to qualifying for bidding without securing the pre-qualifying requirements, according to the group.

“Such disrespect for our culture and traditions angers us,” said Pranada. The lack of specific rehabilitation and activities to address the negative impacts on biodiversity, property, culture, health, and livelihood – which can be worsened by the changing climate and effects of forced displacement – is causing fear among affected residents.

There were no viable alternatives provided too, except for dam configuration.

According to Penamante, “If this pushes through, time will come that we will go hungry and push us to commit crimes like rob the people who are helping us. It will ruin our good relationships. We don’t wish that to happen.”

In the comment of Stop Kaliwa Dam Network on the EIS report, it said there were no efforts specified to reduce loss of life and property, as well as how these will be established and implemented.

The EIS report also said the key impact in the Kaliwa River project is the “relocation of relatively few households from spillaway area.”

The proponent should clearly specify the number of households and the population that will be affected, according to the group.

Retired US scientist Ruben Guieb, who reviewed the EIS report for the Philippine Movement for Climate Justice (PMCJ), also said the project’s EIS failed to quantify the proposed project’s significant environmental destruction, particularly on forest land, as well as on fish and wildlife habitat destruction and the loss of threatened and endangered species.

“Worst, the EIS did not show how these significant impacts, through mitigations could have been reduced to insignificant levels,” he said.

He explained the reduction of significant project impacts to residual levels is the ultimate mandate of the Philippines EIS System; Only in doing this can economic project development be balanced with environmental protection and conservation. Hence, the so-called sustainable development.

“It is really sad that Kaliwa Dam Project’s technically deficient, inconclusive and poorly written document was used to justify the issuance of its ECC,” Guieb said.

It only shows that sustainable development, as a balancing legal requirement, is used without really understanding what it means, and what it takes to implement it, he added.

Nila Grace Pranada Ouano, Indigenous Peoples Mandatory Representative (IPMR) in Barangay Daraitan, said “It hurts to know that the project will push through. Going around our place would cause pain then because you knew it is no longer yours. Our rights to our land end with it.”

She clarified she was not against the government, but she could not help ask, “Why did the government recognize our rights for our ancestral lands in the first place? They made laws that taught us that it is ours. Now it is also the government that is creating projects that oppose it.” – Rappler.com