‘Humiliating’ treatment of Duterte at Japan enthronement rites? Not quite 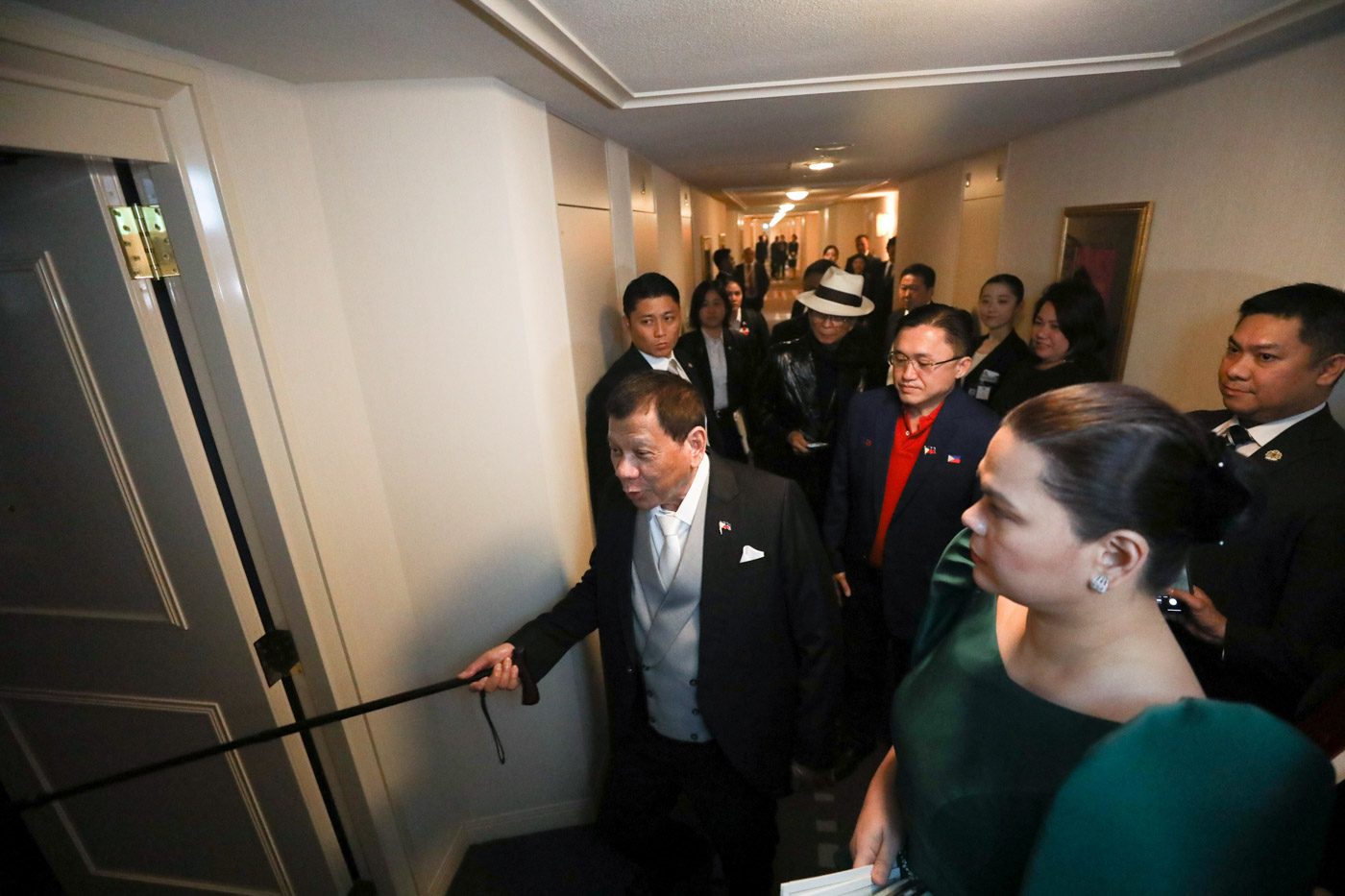 Facebook Twitter Copy URL
Copied
How credible are the claims of a viral post alleging that President Rodrigo Duterte was given humiliating treatment at the Japanese Emperor's enthronement?

MANILA, Philippines – A Facebook post claiming Philippine President Rodrigo Duterte faked his back pain because of “humiliating” treatment at the enthronement of the Japanese Emperor has gone viral.

Posted by Ding C. Velasco, it has been shared close to 2,000 times on Facebook alone. This does not count texts, emails, and online messages that have spread like wildfire.

Foreign Affairs Assistant Secretary Eduardo Meñez said that he had “verified with Tokyo” and called the Philippine embassy there, leading him to conclude that the “allegations are false.”

Mayor Sara Duterte dismissed the viral post as “utter trash” and described it as insulting not to President Duterte but to the Japanese government.

“The Government of Japan has been very kind and generous to President Duterte and our country. Let us not disrespect the graciousness of the Japanese people with lies,” she told Rappler in a message.

It’s also important to note that Ding C. Velasco has posted false claims on Facebook before. Rappler fact-checked one of these claims. In his post about the President’s Japan visit, he said he “could only speculate.”

How plausible are Velasco’s speculations? Rappler asks various officials, including Japanese insiders, and analyzes photos and videos of the ceremony.

Some of Velasco’s claims are not easily verifiable, like whether or not Duterte’s pain was a ruse. But some portions of the post can be checked for accuracy using readily available materials.

“The seating protocol alloted to the Philippines previously for a Head of State was downgraded to that of an Ambassador and when upon arriving in Japan – Duterte was notified of this (to seat at the back with Ambassadors) – they tried to ask the Enthronement Committee to re-arrange the seating protocol – and their request was denied.”

This claim is easily debunked by the fact that Duterte and his daughter Davao City Mayor Sara Duterte were seated beside other country leaders. 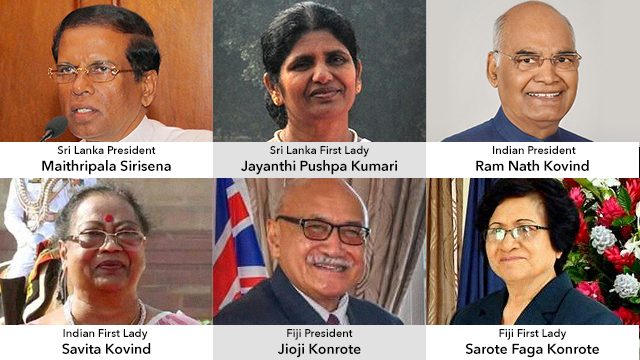 Clearly seen across Duterte and Sara are Fiji President Jioji Konrote and his wife First Lady Sarote Faga Konrote, in this photo released by Malacañang but described as coming from the Japanese government.

Sara is even seated right beside Indian President Ramnath Kovind and his wife First Lady Savita Kovind. Unfortunately, Kovind’s face is covered by a window frame. But the photo shows Mrs Kovind’s face. It is highly unlikely that Mrs Kovind was seated beside anyone other than her husband.

Beside Sri Lanka’s First Lady is a row of European royals which gives you an idea that the area was reserved for leaders and dignitaries, not ambassadors.

Also, Duterte and Sara are on the second row, which is not a bad seat. In fact, kings and queens were also on the second row (albeit in the area for royals), like Bhutan King Jigme Khesar Namgyel Wangchuck and his wife Queen Jetsun Pema, and Cambodian King Norodom Sihamoni.

Footage and photos of the area from which guests watched the enthronement show that the first two rows nearest the viewing window were occupied by leaders and royals while at the back was a much bigger space for other officials. Duterte and Sara were in the first two rows.

DFA Assistant Secretary Meñez also told Rappler, “The Japanese are sticklers for protocol and PRRD is not only Head of Government but Head of State as well so it is unthinkable that the Japanese would downgrade him.”

Claim 2: His seat was downgraded because he confirmed his attendance “at the last minute.”

“Nobody crashes the ceremony of a Japanese Emperor being enthroned to change seating protocol because such rituals and arrangements are planned much in advance by the meticulous Japanese.”

The Philippine embassy in Japan informed Tokyo of Duterte’s attendance on August 29, Meñez told Rappler. This refutes Velasco’s claim that “in late August” when the formal invitations were sent, “Duterte sent word that he cannot attend.”

However, on September 23, Presidential Spokesman Salvador Panelo said Duterte was considering not attending the ceremony.

“He said he has so many work to do. He might just send somebody,” said the spokesman during a Palace news briefing.

A Nikkei article posted October 20, two days before the ceremony, includes Duterte as among the leaders who confirmed their attendance as announced by the Japanese government.

Even if Duterte confirmed later than August, strict rules on seating foreign leaders would have still been applied by the organizers.

A source, based in Japan and privy to how officials did the seating arrangement, explained that there were 3 rules for this.

Firstly, the seating order was arranged in the order of king and queen, head of state, then other leaders. Secondly, leaders of the same rank were seated according to length of tenure. Thirdly, the two rules would apply regardless of when the attending leader confirmed their presence.

Based on this, it seems more likely the Japanese organizers would prioritize giving the leader the treatment laid down by these rules rather than disrespect the leader just because of the timing of their confirmation.

But was Duterte’s attendance rushed? One thing is for sure: Philippine media were not told in advance of his confirmed attendance. Unlike for other foreign trips, there was no media advisory and pre-departure briefing for this engagement. Malacañang reporters were only told by Senator Bong Go of Duterte’s attendance the day before his departure.

But this only means media were told late, not necessarily that Duterte confirmed late with the Japanese.

Claim 3: No one of high rank in Japan’s Foreign Ministry welcomed Duterte when he arrived in Tokyo.

“Upon their arrival in Tokyo, when nobody of high rank from the Japanese Foreign Ministry came to meet them – could have been enough notice for Duterte and his entourage to realize that Duterte’s last minute decision to attend had dire consequences.”

The President was welcomed at the airport by Japan’s former ambassador to the Philippines Kazuhide Ishikawa and Philippine Ambassador Jose Laurel V “among other senior government officials,” said Malacañang in a statement on Tuesday, October 22.

In most other presidential arrivals, it is more common that another high-ranking official, like a minister or deputy minister heads the welcoming party. Ambassadors usually play only a supporting role.

But given the scale of the enthronement, in which some 200 leaders were guests, it’s not unusual that this task was delegated to an official like Ishikawa.

“As to arrival, you must realize that over 80 Heads of State or Heads of Government plus hundreds of other VIPs were arriving within a span of two days, and with government preparations in full  swing, all Japanese Cabinet ministers were busy elsewhere,” said DFA’s Meñez.

Besides, he said, Ambassador Kazuhide is a “senior ministry official” who was recently put in charge of the Kansai region, which means he is not small fry.

“Plus, his former position as Ambassador to Manila gave him a special connection to PRRD,” added Meñez.

Claim 4: His “unbearable pain” is fake because at Nene Pimentel’s wake he looked fine.

“In several videos taken at Heritage Park, Boy Finger had no ‘walking cane,’ and he mingled unassisted. He functioned on his own, there wasn’t ‘visible wincing or difficulty.’”

It is difficult at this point to debunk the claim that Duterte faked experiencing pain. We have only the words of the President and his spokesmen on this matter. No medical bulletins have been released to prove or disprove this claim.

But people at the wake say the President, at times during the wake, looked like he had difficulty walking. He walked slowly and he was slouching.

It is true he did not use the cane the entire time but he also managed without the cane at the enthronement ceremony. The Palace never claimed Duterte needed the cane all the time. There was also never any claim that the “searing pain” lasted until the wake. – Rappler.com