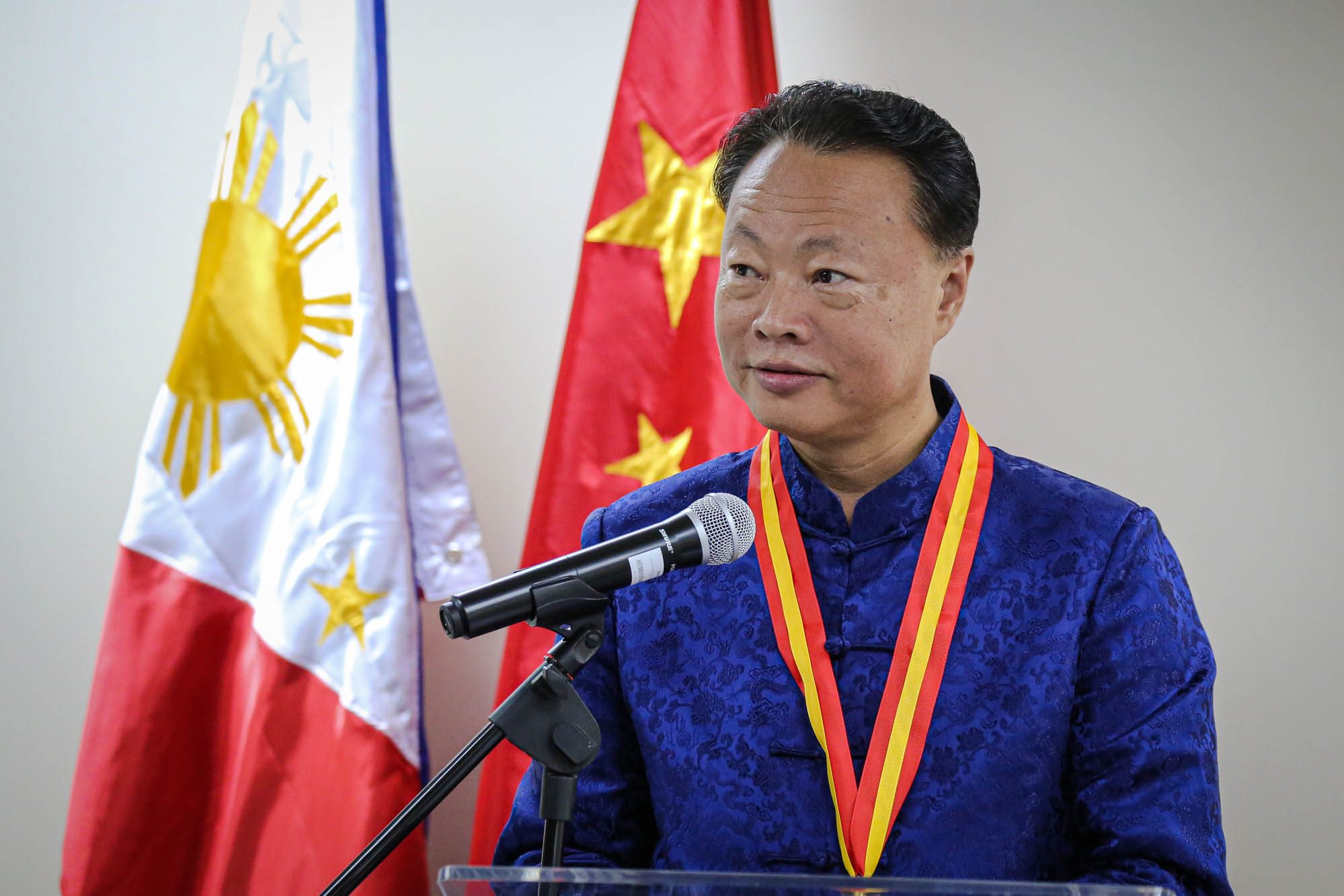 Facebook Twitter Copy URL
Copied
In a resolution, Davao City also thanks Chinese Ambassador Zhao Jianhua for several projects funded by the China Foundation for Peace and Development for the President's hometown

MANILA, Philippines – Davao City heaped praises on Chinese Ambassador Zhao Jianhua for what it described as his “historic achievements” in developing closer ties between the Philippines and China.

In a resolution issued by City Councilor Augusto Javier Campos III and shared by the Chinese embassy on Sunday, October 27, President Rodrigo Duterte’s hometown thanked Zhao for “his contributions to the Philippines and the Filipino people” since assuming his post in 2014.

“Be it resolved, by the Sangguniang Panglungsod of the City of Davao, to highly recognize and commend the People’s Republic of China’s Ambassador to the Philippines His Excellency Zhao Jianhua for his historic achievements for a better, closer, and stronger diplomatic ties between the Philippines and the People’s Republic of China,” the resolution read.

The resolution also highlighted Zhao’s efforts involving several projects set up and completed in Davao City, including the construction of 3 water pumping stations, a water system, over a dozen school buildings, and the ongoing Philippines-China medical equipment project

According to the resolution, the projects were all funded by the China Foundation for Peace and Development through Zhao and “the Embassy of the People’s Republic of China in the Republic of the Philippines through Ambassador Zhao Jianhua’s fund.”

It is rare for local government units to issue resolutions commending foreign envoys. The resolution was issued days before Zhao is set to leave his post in the Philippines in November 2019.

Davao City often figured in many Chinese official’s trips such as when Chinese Foreign Minister Wang Yi made an official visit to the Philippines and held most of his activities in Davao rather than the capital city of Manila.

The Chinese government likewise opened a new Chinese consulate in Davao City, which was inaugurated by no less than Wang and Foreign Secretary Teodoro Locsin Jr last year.

Davao City itself has close ties to China with agreements allowing it trade with several Chinese cities including Nanning and Jinjiang. Chongqing and Hainan were also reported to be interested in similar deals.

Aside from this, several Chinese military ships and planes also landed in Davao City, with government officials often explaining these as “refueling” stops. The move was widely slammed by critics who warned the arrivals had security implications.

Under the Duterte administration, the Philippines has adopted a friendlier stance toward China, downplaying a decades-long sea dispute in exchange for loans and grants from Beijing. (READ: China at 70: ‘Fantasy of cordial relations’ with the Philippines) – Rappler.com