Cayetano open to being Speaker until end of 18th Congress 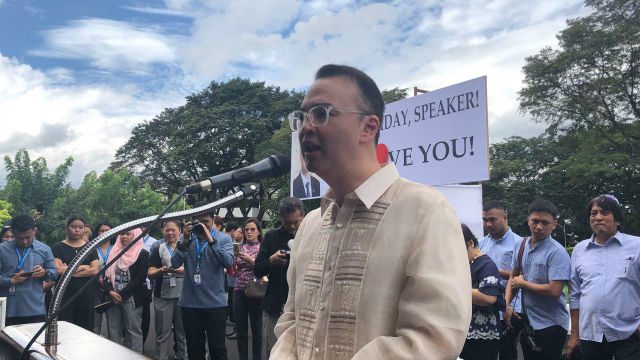 MANILA, Philippines – Speaker Alan Peter Cayetano said he is open to holding on to the top post in the House until 2022 – as long as Marinduque Representative Lord Allan Velasco agrees to forego their term-sharing deal.

Cayetano was asked by reporters on Monday, October 28, if he was willing to become Speaker until the end of the 18th Congress, as talks continue regarding whether or not his term-sharing agreement with Velasco would push through.

(Am I open to the possibility? If Congressman Velasco himself tells me, ‘You should be the Speaker,’ I can’t force him to change his mind, right?)

But Cayetano was quick to say he respects that Velasco has his own supporters in the House as well.

“Having said that, may leadership din ‘yong tao. May following din ‘yong tao. Head din siya ng partido ng ating Pangulo so I also have to respect that,” he added.

(Having said that, he has his own leadership. He has his own following. He is the head of the party of the President so I also have to respect that)

Two ranking House members previously said it might be difficult to replace Cayetano as Speaker after the latter received a 62% trust rating and 64% approval rating in the September Pulse Asia survey.

Cayetano, however, said the term-sharing deal endorsed by no less than President Rodrigo Duterte still stands. The Taguig City-Pateros congressman said he would rather focus on passing Duterte’s legislative agenda for now.

But in the same breath, Cayetano said he cannot stop other congressmen from expressing support for him.

“Basta’t right now, ayoko nang isipin na mayroong pagbabago sa usapan. For me, mas productive din ako isipin that on the 15th month, after the 15th month, I have to say, I’ve done my job. Now question: Did I do it well or not? So doon muna ako magfo-focus,” the Speaker added.

(But right now, I don’t want to think about any changes in the deal. For me, it would be more productive for me to think that after the 15th month, I have to say, I’ve done my job. Now, the question is: Did I do well or not? So I’d like to focus there first.)

Presidential Spokesperson Salvador Panelo already said Duterte would leave it up to House members to decide if they still want to push through with Cayetano-Velasco term-sharing deal.

It was a similar line used by Malacañang back in July, when Cayetano, Velasco, and Leyte 1st District Representative Martin Romualdez were the 3 strongest contenders for the speakership.

Duterte initially refused to give his blessing to a speakership candidate.

But following the weeks-long heated battle that divided the House, the President finally intervened and said Cayetano would be Speaker for the first 15 months of the 18th Congress, while Velasco will lead the House in the remaining 21 months after that.

Under the same term-sharing deal, Romualdez was given the job of majority leader, which he would keep for all 3 years of the 18th Congress. – Rappler.com