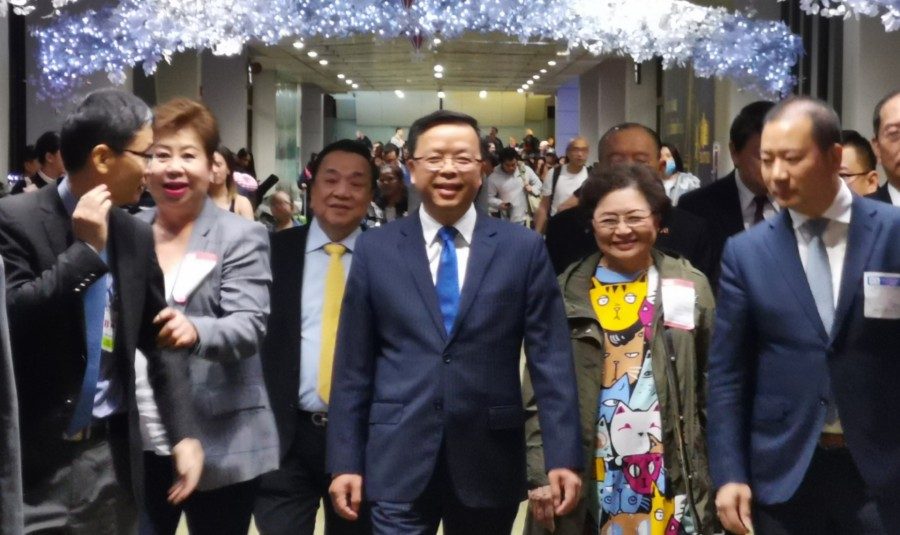 Huang landed in Manila past midnight on Tuesday, welcomed by protocol officials from the Department of Foreign Affairs and representatives of the Chinese community in the Philippines.

A diplomat with at least 3 decades of experience and expertise in Asia and Southeast Asia, Huang follows the 5-year stint of former Chinese ambassador to the Philippines Zhao Jianhua, who ended his tour of duty in the Philippines in October this year.

In a short message, Huang said he was “very honored and grateful” to serve in the Philippines, where he felt “back at home.”

“Since I was a little child, my families have kept telling me that the Philippines which faces China across the sea is our relative with close kinship and cultural bond. Therefore the natural affinity with the Philippines has grown in my heart,” he said.

Huang likewise expressed his “astonishment” over achievements seen in the Philippine under the Duterte administration.

“Neighbors wish each other well, just as loved ones do to each other. Since President Duterte took office, the Philippines has made impressive achievement at various areas…. I have every reason to believe and expect that the country will achieve greater strength and prosperity in the coming years and decades,” he added.

Sustaining ties: Huang comes at a time when Philippines-China relations have seen a “full turnaround” under the Duterte administration, which has fostered an “independent foreign policy.” This foreign policy saw the Philippines pivoting from traditional long-time allies such as the United States to countries like China and Russia.

Like his predecessor Zhao, Huang is expected to be dealing with hot-button issues, including the decades-long sea dispute in the South China Sea and West Philippine Sea, which has come under close public scrutiny following China’s aggressive tactics in the maritime area.

Huang also faces the challenge of sustaining China’s “warm ties” with the Philippines as he takes the helm of Philippines-China relations in the latter half of President Rodrigo Duterte’s presidency.

What to expect so far: Among the milestones Huang will oversee as China’s new ambassador to the Philippines includes the upcoming 45th anniversary of the establishment of China-Philippines diplomatic relations in 2020.

Haung said he was “extremely honored” to serve as the Chinese Ambassador to the Philippines as the two countries celebrate over 4 decades of relations, saying “the best is yet to come” for Manila and Beijing.

Amb. Huang’s assignment coincides with the upcoming 45th anniversary of the establishment of China-Philippines diplomatic relations in 2020. Being able to witness this, he believes that 'the best is yet to come' for the China-Philippines relations. pic.twitter.com/vFquU7Utvy

Aside from this, Huang assumes his post in Manila as China and ASEAN speed up efforts to pass a long-delayed South China Sea Code of Conduct whose discussions are being coordinated by the Philippines. Beijing earlier declared it wanted to complete the signing of the code before the end of the Duterte administration.

In his stint as China ambassador to ASEAN, Huang saw frequent high-level bilateral visits between ASEAN leaders and China. A highlight of this was the presence of all ASEAN countries at China’s Second Belt and Road Forum for International Cooperation last April, Huang said in an opinion piece published in the Jakarta Post.

Under his watch, Huang also saw improved economic ties between China and ASEAN with the region overtaking the US to become China’s second-largest trading partner for the first time in the first half of 2019.

For Huang, China and ASEAN, of which the Philippines is a founding member, are interconnected and “share weal and woe.”

Prior to his stint at ASEAN, Huang’s previous diplomatic assignments included posts in Brunei, India, the US, and Pakistan.

Huang is expected to present his credentials to Duterte before he can officially begin work as China’s ambassador to the Philippines. – Rappler.com