DILG threatens Gwen Garcia: We can sue you 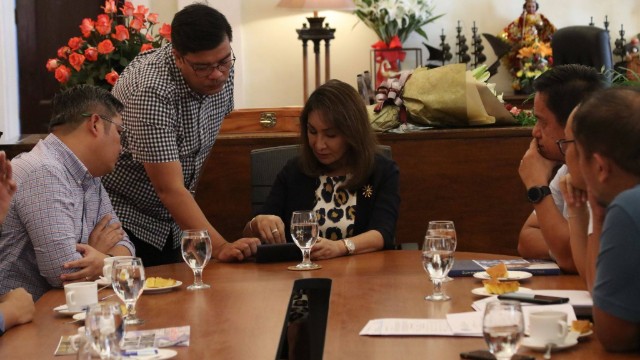 CEBU CITY, Philippines – When at least 7 towns in Cebu failed the Department of the Interior and Local Govennment’s (DILG) road clearing assessment, Cebu Governor Gwendolyn Garcia did not take the criticism sitting down.

“Wa ko mubilib anang rating nila. Unsa kahag kami ang mo-rate pod nila (I’m not buying their ratings. What if we rate them too)?” Garcia shot back first on October 15.

On Sunday, November 3, in response to Garcia’s comments, DILG Assistant Secretary RJ Echeverri said his department would not hesitate to sue Garcia.

“If you have lapsed and blame the DILG for it, we will not hesitate to file a case [against you],” Echeverri said. “Let me give you a prime example, the governor of Cebu has dropped harsh words against the DILG because they had low functionality rating in the road clearing assessment,” he added.

Echeverri, however, was not clear about what charges they would file against the governor.

How did the dispute start?

On October 11, the DILG announced that 97 mayors nationwide failed to comply with President Rodrigo Duterte’s order to clear main thoroughfares in their areas within 60 days.

7 of these non-compliant local government units were in Cebu. They include: Carcar City, Badian, Carmen, Compostela, Ginatilan, Moalboal, and Pinamungajan.

Cebu City, which is independent of the province, passed the assessment.

In response to the DILG’s ratings, Garcia accused the DILG of overdoing seminars and not doing enough actual inspections.

“Instead of sitting in their offices and opening their mouths, they should tour towns and cities to see the efforts of local officials,” Garcia said in Cebuano.   She also complained that the DILG was not clear about their rubrics.

“Even though I already said that LGUs have jurisdiction over their roads, I feel for the LGUs that were tagged as non-compliant,” Garcia said after the memo was released.

“They could have at least warned the LGUs, the parameters should have been clearly set, and they have all the time to monitor,” Garcia said.

“Let me remind the good governor, the DILG is here to help you and not to put you down,” Echeverri said during a press conference.

“But if you challenge the DILG and question our integrity, be ready to face [us] or let us face each other in courts if possible,” he added.   He equated Garcia’s comments with hitting President Rodrigo Duterte, who issued the memo in the first place.

Garcia, who returned as governor this year after a 9-year stint in Congress, is an ally of the President and campaigned for him in 2016.

Although governors were not included in the assessment, Echeverri said they would consider conducting a review of Garcia’s performance to see if she should be held responsible for the LGUs failing the road clearing assessment.

On Monday, November 4, Garcia said that she did not want to engage in a “verbal tussle” with Echeverri.

Her legal counsel Marino Martinquilla said, however, that Echeverri’s threat to sue Garcia was unwarranted.

“Wa mahadlok ang gobernador niining hulga kay wa siya mosupak og balaod (The governor is not moved by this threat because she did not violate any law),” he said.

“Nothing is wrong with what the governor did. As the leader of the province, she was only speaking for these 7 LGUs,” Martinquilla added.

Garcia is no stranger to conflict with the national government.

In 2012, during her last term as governor, Garcia was suspended by former president Benigno Aquino III for grave abuse of authority.

After receiving that order, Garcia chose to hole up in the provincial capitol instead of following the suspension.

In this case, Garcia said she believes Echeverri is just reading too much into her words and emphasized that she did not tell any LGU to resist the road clearing memo.

“The gentleman concluded too much. If you base your conclusion on the wrong premise (then) you have a wrong conclusion,” she added, referring to Echiverri. – Rappler.com