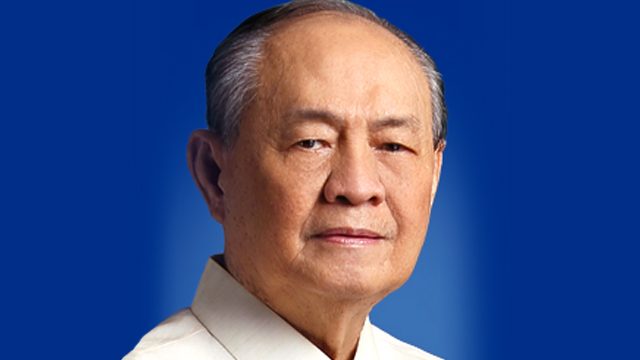 This was confirmed to Rappler by his son, Isabela Governor Rodolfo “Rodito” Albano III, who said his father died due to heart failure. The family patriarch was 85 years old.

“Yup, [he died] today at 6 pm,” the younger Albano said in a text message.

In the past 3 decades, the elder Albano and his son Rodito took turns occupying the seat of Isabela’s 1st District in the House of Representatives.

The family patrarch also served as House Majority Leader from 1994 to 1995 during the speakership of Jose de Venecia.

When Rodito’s 3rd term as congressman ended in 2019, he was succeeded in the current 18th Congress by his brother Antonio “Tonypet” Albano. Their father was elected LPGMA representative in the same elections in May.

Albano had also served as Energy Regulatory Commission chairperson from 2004 to 2008.

His wake will begin on Wednesday, November 6, at The Heritage Park in Taguig City. His remains will be brought to the Batasang Pambansa on Thursday, November 7.

Tonypet said his father would then be laid to rest in Cabagan, Isabela.

Albano is survived by his 6 children – Rodito, Tonypet, Marisol, Manny, Milette, and Malou – as well as 7 grandchildren. – Rappler.com