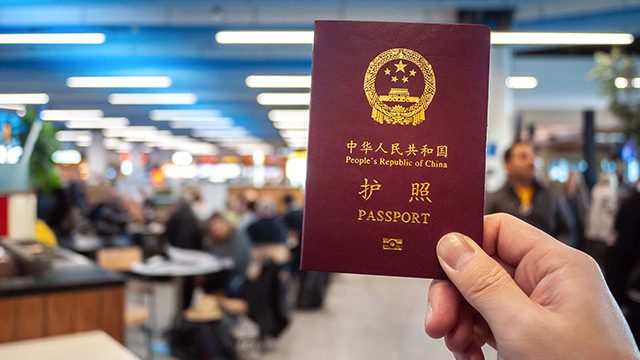 “In a memorandum issued by BI Commissioner Jaime Morente, immigration officers in the different ports may now affix their stamps adjacent to the Philippine visa of a regular e-passport presented by a PROC passenger,” BI Spokesperson Dana Mengote Sandoval said in a statement on Wednesday.

The Philippines, under then president Benigno “Noynoy” Aquino III, stopped the stamping of Chinese passports in December 2012 as a form of protest to China’s nine-dash line claim.

“Said policy was implemented after China introduced a new e-passport with pages that included the historic nine-dash line map where it bases its claim to the disputed islands,” the BI said in its release.

President Rodrigo Duterte already signed off on this policy change as early as August, agreeing with the proposal of Foreign Secretary Teodoro Locsin Jr.

“The change in policy complies with the DFA’s recently-issued foreign service circular (FSC) instructing its Philippine consular officers to affix the Philippine visa on the pages of Chinese passports where the nine-dash line map is drawn,” said the BI.

In the 7 years of the no-stamp policy, Philippine visas were given to Chinese passengers in a separate sheet of paper.

“We support this policy update of the Department of Foreign Affairs. In the past, we have also expressed security concerns over the old practice because sheets of papers can easily be lost,” said BI Commissioner Jaime Morente.

The policy update takes effect at a time after Malacañang shrugged off another incident at the Scarborough Shoal where a Chinese vessel turned away a commercial ship manned by an all-Filipino crew.

The ship’s captain, Captain Manolo “Noli” Ebora, who challenged the Chinese vessel, has been hailed a local hero of his Batangas hometown, but is now fearing he may lose his job over what he did.

Presidential Spokesperson Salvador Panelo said the incident is not the Philippines’ concern because because it involved a Liberia-flagged, Greek-owned ship, the M/T Green Aura.

Locsin said it would jeopardize thousands of Filipino seafarers if he protested the matter with China.– Rappler.com