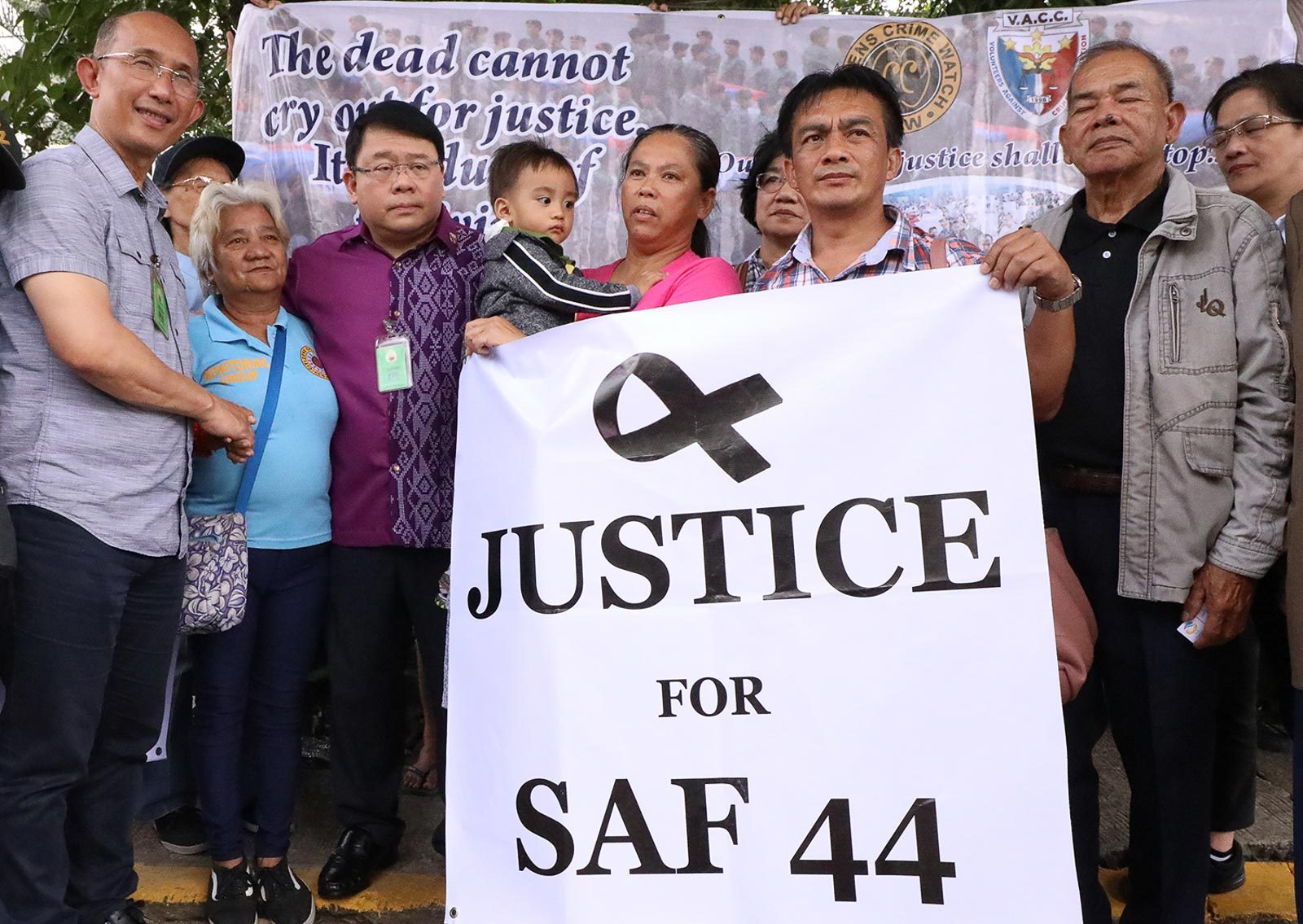 Facebook Twitter Copy URL
Copied
This is despite a recent Supreme Court ruling saying Aquino cannot be charged with homicide. Chief Justice Peralta leaves it to Ombudsman Martires to decide.

MANILA, Philippines – The Volunteers Against Crime and Corruption (VACC) will attempt to reopen a previously dismissed complaint of homicide against former president Benigno “Noynoy” Aquino over the 2015 Mamasapano bloodbath, despite a recent Supreme Court ruling saying there is no probable cause to charge him.

VACC’s Ferdinand Topacio filed on Friday, November 8, a Motion for Reinvestigation before the Office of the Ombudsman, pleading for Ombudsman Samuel Martires to revisit evidence in the hope that he will rule differently from former ombudsman Conchita Carpio Morales who dismissed earlier complaints for homicide.

Topacio, representing some of the kin of the slain Special Action Force (SAF) 44, boosted his motion using an affidavit of Baguio City Mayor Benjamin Magalong, the former chief of the Criminal Investigation and Detection Group (CIDG), who led the investigation that concluded Aquino committed lapses in judgment during the planning of the high-stakes Mamasapano operation.

Magalong was with Topacio during the filing Friday morning. Magalong’s affidavit consists of generally lifted portions of his earlier investigative report.

The botched operation, aimed against a top terrorist, ended up killing 44 elite policemen.

This motion comes despite a recent unanimous ruling of the Supreme Court on September 3 saying that “there is no probable cause to charge private respondents with reckless imprudence resulting in multiple homicide.”

The Supreme Court denied the petition filed by the VACC also, which requested the High Court to overturn Morales’ resolution to charge Aquino of graft only, and to charge him with homicide instead.

In the decision penned by retired associate justice Francis Jardeleza, the Supreme Court said: “We do not find probable cause to charge Aquino with reckless imprudence resulting in multiple homicide. If it would be necessary to invoke remote justifications to thrust a respondent to court then we would have been remiss in our duty to uphold the law and protect the innocent from the torment of a criminal prosecution.”

Topacio’s 7-page motion does not make mention of this ruling. (READ: Mamasapano clash: What did Aquino know?)

Chief Justice Diosdado Peralta left it to Martires to decide.

Despite the clear language of the ruling that “there is no probable cause” to charge Aquino, Peralta claimed that the issue of probable cause should be resolved by the lower court.

“We do not want to encroach on the very power of the lower court to determine the existence of probable cause. What we only rule upon is the Rule 65 to determine there is grave abuse of discretion that’s what we said in our ruling,” said Peralta.

Martires earlier withdrew the charges of graft and usurpation of authority, saying a president cannot be charged with usurpation because he is the president.– Rappler.com