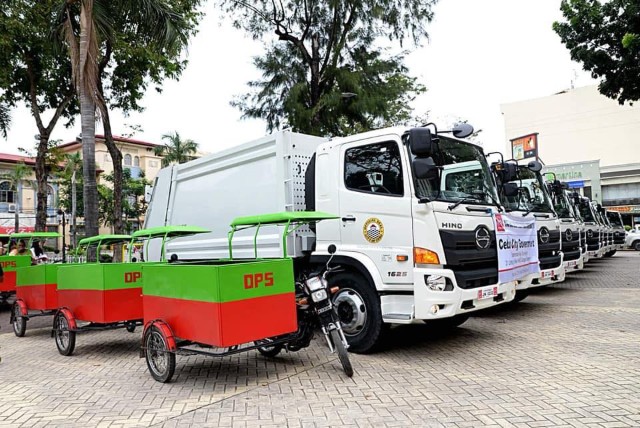 Cebu City Mayor Edgar Labella told residents during the blessing of new garbage trucks on Tuesday, November 12, that the city would work to give residents less reasons not to throw away their garbage properly.

“[There are] no more excuses for undisciplined people to throw their garbage indiscriminately,” Labella said during the turnover of 21 brand new garbage trucks to the city.

The new Hino trucks brings the city’s fleet to 32, including the existing 11 city-owned garbage trucks.

The city outsources some of its garbage collection to third-party provider Jomara Konsstrukt, but Labella said he would consider canceling the P25-million contract now that the city has enough trucks.

Waste collection and disposal has been a perennial issue in Cebu City. (READ: Once a shipwreck survivor, Labella now captain of Cebu City)

It’s common to see waste sitting on sidewalks or roads in dozens of Cebu City barangays.

“We will put more garbage bins so there [is] no reason for people to not throw away their garbage in the proper areas,” Labella said.

The city collects about 600 tons of garbage daily.

In Labella’s first 100 days, the first-time mayor spent a lot of his time focusing on clearing road obstructions, creeks, and waterways.

He said previously that he would fine barangay captains who are unable to keep their villages clean. – Rappler.com