Robredo on the right track in anti-drug campaign, says Malacañang 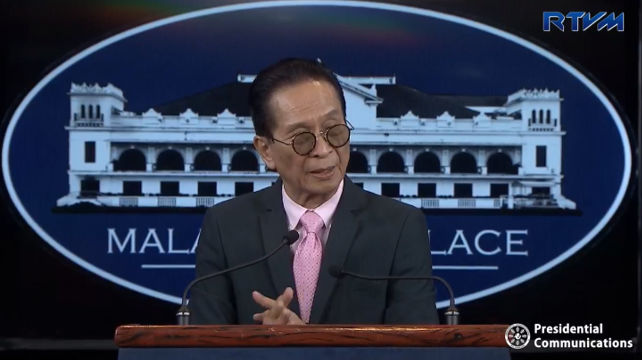 MANILA, Philippines (UPDATED) – So far, Vice President Leni Robredo is on the right track in pursuing her new role in the government’s campaign against illegal drugs, Malacañang said on Thursday, November 14.

Presidential Spokesperson Salvador Panelo made the initial assessment in an interview on CNN Philippines, when asked to weigh in on Robredo’s performance just over a week into her new job as co-chair of the Inter-Agency Committee on Anti-Illegal Drugs (ICAD).

Panelo said that the Vice President should be given a chance to do her job first before judging her performance, but so far, she was making the right moves.

Panelo noted that in her first week on the job, Robredo has been taking the “educational” route” by meeting with experts and others who can help her form her own strategy in the fight against illegal drugs.

“She doesn’t know anything about it. So, that is the right step – knowing what are the facts; ano bang usapan ninyo, ano bang ginagawa ninyo. Eh kung ikaw nga naman eh, paano ka gagalaw kung hindi mo alam ang situation in your turf (what have been agreed upon, what’s being done. If you were in her shoes, how can you move when you don’t know the situation in your turf)?” he said.

Panelo added that Robredo has been seeking advice from experts which would form the basis of her own strategy, which he said was another step in the right direction. (READ: Lacson’s advice to Robredo: ‘Watch your back’ as anti-drug czar)

When asked, Panelo said he agreed with Robredo’s decision to meet with US officials and representatives from the United Nations Office on Drugs and Crime in relation to the fight against drugs. (READ: U.S. expresses ‘full support’ for PH anti-drug campaign – Robredo)

“Talaga namang mayroong coordination between this government and the American government with respect to that. Just to be informed, she has to inform herself. Paano siya gagawa kung hindi mo alam ang nangyayari?” he said.

(We really have existing coordination between this government and the American government with respect to that. Just to be informed, she has to inform herself. How can she act if she doesn’t know what’s happening?)

But when asked whether Robredo could breathe new life into the government’s war on drugs though her own strategy, Panelo maintained that the President Rodrigo Duterte’s drug war “has been successful” as is.

He reiterated that Robredo was just brought into the picture since she had questioned the effectiveness of Duterte’s drug war, which had claimed thousands of lives since it was implemented in mid-2016.

Panelo also said that Robredo would be invited to Cabinet meetings, but only when the campaign against drugs is on the agenda.

Robredo, a vocal critic of the drug war, accepted the Duterte’s job offer amid concerns that it was a “honeytrap” that would expose her to sabotage. She said her “mother’s instinct” prompted her to take the job amid advice for her to refuse it.

The Vice President had said that she was willing to risk even her political capital, if becoming ICAD co-chair meant helping stop the killings in Duterte’s drug war. (READ: The gamble of Leni Robredo)

In contast to Duterte’s bloody approach to solving the drug problem in the country, which has been criticized as a failure, the Vice President is pursuing a strategy focused on drug demand reduction and rehabilitation. (READ: The glaring contradictions in Duterte’s war on drugs)

Her first directive to law enforcement agencies on Thursday was for them to complete the government’s baseline data on the extent of the illegal drugs problem in the country. – Rappler.com