Nov 19, 2019 8:46 PM PHT
JC Gotinga
Facebook Twitter Copy URL
Copied
Although the US maintains it does not take sides in the sovereignty dispute between the Philippines and China, its defense chief wants smaller countries to pressure the rising power into respecting their rights 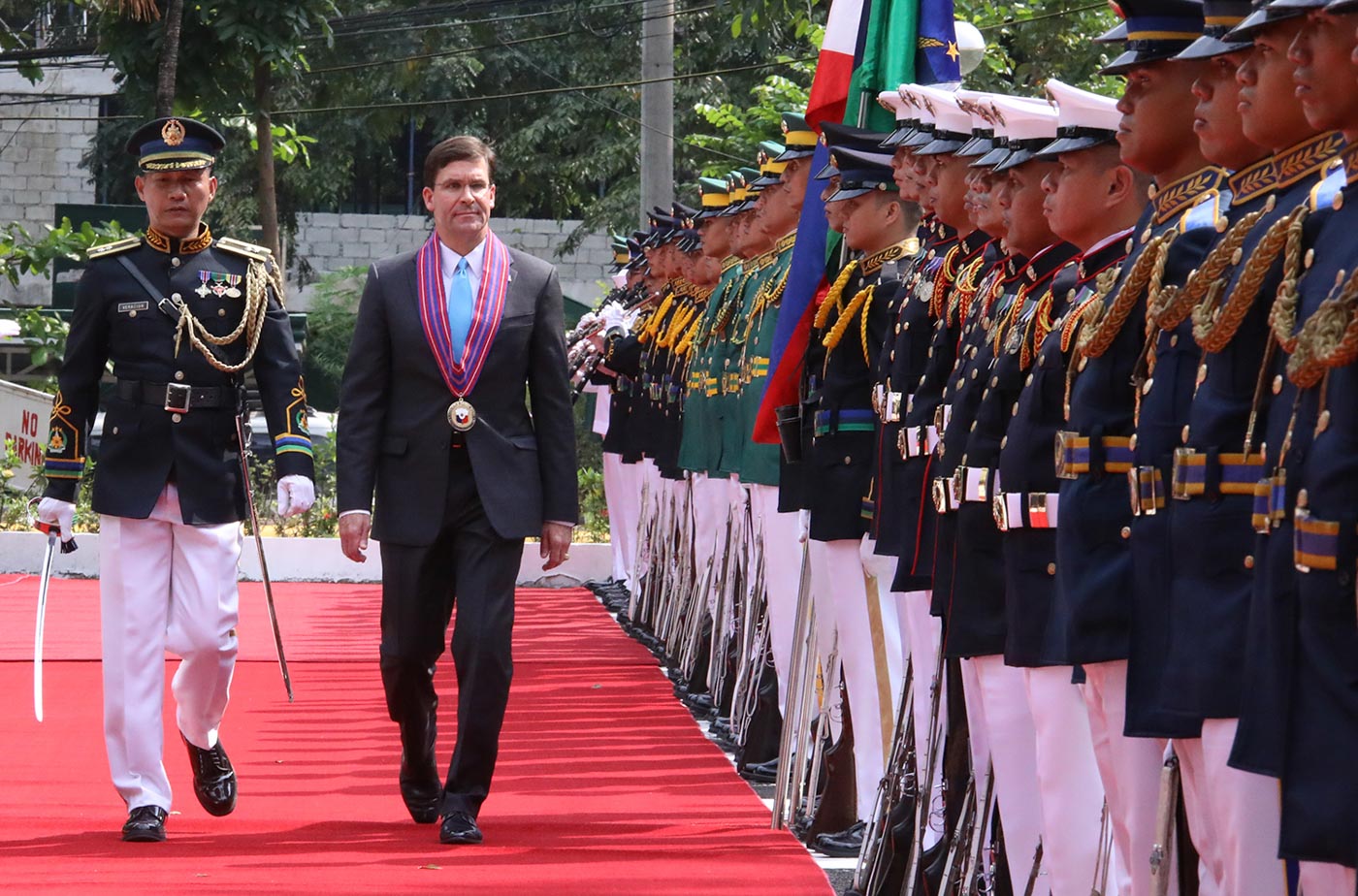 MANILA, Philippines – US Defense Secretary Mark Esper, while visiting the Philippines on Tuesday, November 19, urged countries in Southeast Asia to be more assertive of their sovereign rights in the South China Sea, as he slammed China’s use of “coercion or intimidation to advance its national interests.”

In a briefing with local and international reporters alongside Defense Secretary Delfin Lorenzana at Camp Aguinaldo in Quezon City, Esper spoke about the recent Association of Southeast Asian Nations (ASEAN) Defense Ministers’ Meeting in Bangkok, Thailand, which he attended over the weekend until Monday, before traveling to Manila.

“Most participants in that room are very concerned about China’s excessive claims in the region, of their lack of compliance with international laws and norms. And they’re concerned about the coercive tactics used by Beijing in the entire region to advance their own interests,” Esper said.

The US defense chief was in Manila to discuss bilateral security matters with Lorenzana, who also attended the ASEAN meeting in Bangkok. He and Esper reaffirmed their countries’ treaty alliance, and touched on key areas of defense cooperation such as counterterrorism, maritime security, joint military exercises, cybersecurity, and modernizing the Armed Forces of the Philippines.

Esper highlighted the increased frequency of the US Navy’s freedom of navigation and overflight operations (FONOPS) in the South China Sea, including the Philippines’ exclusive economic zone (EEZ), the West Philippine Sea. He said the US has done more FONOPS “in the last year or so than in the previous 20-plus years” as a way to preserve “lawful uses of the sea” and deter China from closing in on the strategic and resource-rich waterway.

“So I think that it’s incumbent upon all of us to take a very public posture, and to assert our sovereign rights, and to emphasize the importance of law. That is why the US conducts FONOPS,” Esper added.

Although the US has maintained that it does not take sides in the sovereignty disputes among the Philippines, Brunei, China, Malaysia, Vietnam, and Taiwan in the South China Sea, Esper’s mention of “sovereign rights” echoes the international arbitral ruling based on the United Nations Convention on the Law of the Sea (UNCLOS), which invalidated China’s sweeping 9-dash line claim and affirmed the Philippines’ maritime entitlements.

The Philippines and China are UNCLOS signatories, while the US itself is not.

The Philippines, under President Rodrigo Duterte, has taken a lenient stance towards China, refusing to demand that it comply with the UNCLOS-based ruling. Duterte says doing so could lead to war with Beijing. Meanwhile, he has opened up the Philippine economy to Chinese loans and pledges of cooperation.

China, on the other hand, has only ramped up its presence in the West Philippine Sea. Chinese coast guard and naval vessels have repeatedly been spotted criss-crossing and even patrolling waters within the Philippine EEZ.

Chinese vessels have harassed Filipino fishermen and at least one commercial vessel in areas that legally belong to the Philippines.

As the US itself grapples with China’s rise and increasing assertiveness, Esper called on regional partners – and allies like the Philippines – to put more pressure on China. The US and other naval powers, meanwhile, will keep sending their assets to patrol the South China Sea, including the West Philippine Sea.

“The clear signal we’re trying to send is not that we oppose China per se but that we all stand for international rules, international laws, and that we think China should abide by them as well, and that acting collectively is the best way to send that message, and to get China on the right path,” he said. – Rappler.com