Nov 20, 2019 4:10 PM PHT
Lian Buan
Facebook Twitter Copy URL
Copied
The NBI says it is aware the former Comelec chief is in the US, and that 'they are studying their next move' 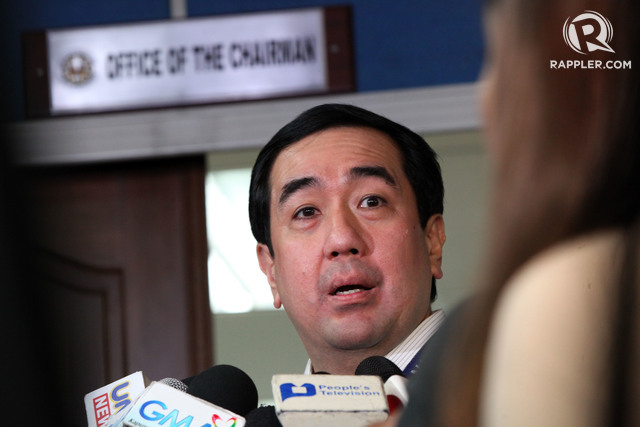 “There was a standing warrant of arrest for the former chairman of the Comelec Andy Bautista,” was Sotto’s brief remarks on Wednesday during the Senate floor deliberations on the 2020 budget of the Department of Justice (DOJ).

Sotto brought it up because the NBI is an attached agency of the DOJ. The Senate ordered Bautista arrested in February 2018, on the upper chamber’s power of contempt, because the polls chief ignored the hearings there into his alleged ill-gotten wealth.

“Some media personalities are asking us and there is already a complaint in the Ombudsman filed against them. Because in the Facebook, they’re bragging that they found Andy Bautista but the NBI cannot find him,” said Sotto.

Senator Sonny Angara, the DOJ’s budget sponsor, said the NBI was aware that Bautista was already in the United States.

“They said he’s really in the US but they’re studying their next move,” said Angara.

Angara also said that the Office of the Ombudsman already asked the Presidential Commission on Good Government (PCGG) for documents relating to Bautista, who was a former chairman of the agency.

“There was also a recommendation by the PCGG to the NBI to investigate the charges against Andy Bautista and some other personalities, so we’d just like to ask for an udpate,” said Sotto.

Bautista was embroiled in a political crisis when his estranged wife, Patricia Bautista, accused him of amassing unexplained wealth. He was soon impeached by the House of Representatives, and then resigned before he could be tried at the Senate.

He disappeared from the public scene after that.

In January 2018, the DOJ main office took over cases against Bautista from city prosecutors, a move that Bautista’s lawyer said “heightens our reservations” on the justice department’s impartiality. – Rappler.com