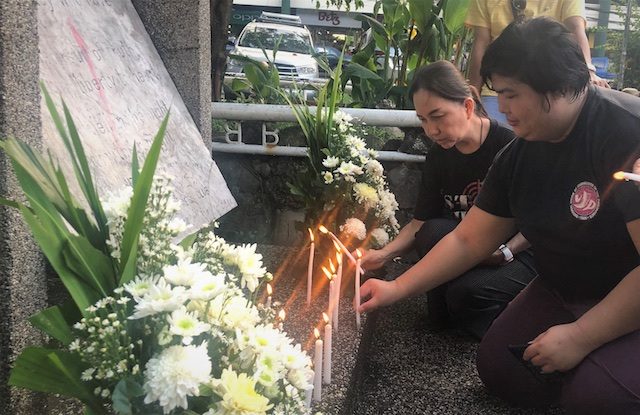 BACOLOD CITY, Philippines – On the eve of the 10th death anniversary of the Maguindanao massacre, journalists here called on the people and their colleagues to be vigilant as the verdict on the gruesome attack is expected in December.

Officials and members of the Negros Press Club and the National Union of Journalists of the Philippines-Bacolod chapter marked the death anniversary of the Maguindanao massacre that killed 58 people, including 32 journalists, with a tribute at the NPC building here on Friday, November 22.

They also lighted candles and offered prayers at the Marker for Fallen Journalists at the public plaza.

The local media groups stressed that the next few weeks will be critical as the promulgation of judgment is expected to be handed down on or before December 20.  (WATCH: Trial of the decade: Highlights of Ampatuan massacre case)

“We call on our colleagues and the Filipino people to be vigilant as we demand true justice for this grisly massacre. We are hoping that justice be finally served,” they said.

They said a decade has passed, and their pursuit for justice on the deadliest attack against journalists and the worst election-related violence in the country continues. (READ: For Mama: Child of Ampatuan massacre victim wants to be a journalist too)

“Until now, no conviction has been handed down against the mastermind of the brutal massacre, the powerful Ampatuan clan. We demand our government to bring the perpetrators to justice,” the groups said. Andrea Jayme, sister of human rights lawyer Connie Jayme-Brizuela who died in the massacre, appealed to President Rodrigo Duterte and Justice Secretary Menardo Guevarra to help in expediting the resolution of the case.

“Some of the perpetrators have already died, while some have been freed from jail and there are policemen involved who have gone scot-free,” said Jayme, who also joined the tribute, dubbed as “#FightFor58.”

She is also hoping the government will ensure the safety of the judge and that the decision will be favorable to them. – Rappler.com