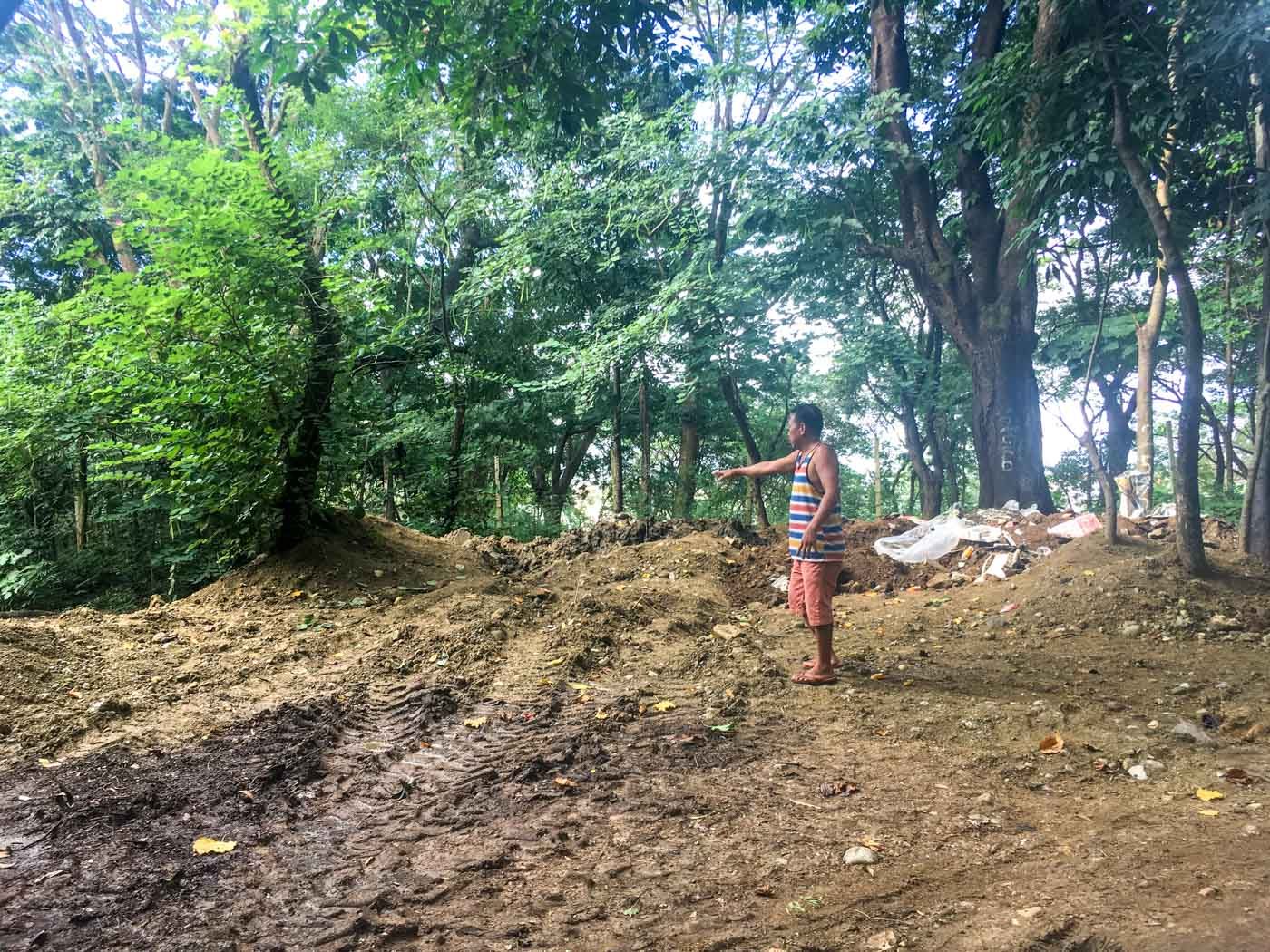 MANILA, Philippines (UPDATED) – Atop a mound of newly-shoveled dirt along an Arboretum Forest trail, children run around and play, carefree. Little do they know: more than a hundred pigs infected with a viral disease were buried underneath the ground they were standing on.

Since September, the Quezon City government has been struggling to contain the African swine fever (ASF), but it has only spread to more barangays. In November, another area was affected by the disease, this time in Barangay UP Campus. Containment procedures were again implemented to prevent the disease from spreading to nearby barangays.

But one day, in a small residential area in the Arboretum Forest within the campus, residents saw a series of events: a gate closure advisory, policemen and authorities roaming around the area, trucks coming in near their homes, and finally, a sickening smell – that of decaying pigs.

Thus, the Pook Arboretum residents started asking questions, getting increasingly worried for their security and health. Soon, they found out from people they know in the barangay that ASF-infected pigs were buried in a plot outside their houses.

In a phone call with Rappler, Quezon City Veterinarian Dr. Ana Marie Cabel confirmed what they had  heard: ASF-infected pigs were buried in Pook Arboretum. She also clarified the number: while 178 pigs were declared, only 121 were culled. Residents say these pigs came from Pook Amorsolo, on the other side of UP Campus.

Nanette Marbibi, block leader of Pook Arboretum Block 2 where the burial site is located, said there are around 29 families in the area. She was concerned about the smell and how they would affect the residents with illnesses. Her own child has epilepsy. Another resident has a heart disease.

But Cabel said they shouldn’t be complaining. “Kung pupunta ka sa area talagang malayo naman eh. I don’t think na dapat silang magreklamo. Tama naman ginawa namin (If you go to the area, it really is far. I don’t think they should complain. We did the right thing),” Cabel said.

Once a barangay tests positive for ASF, the piggery owners will be asked to declare how many pigs they have, any sudden deaths they observed, and other details. They will also meet with the barangay officials and locate a burial site.

Culled pigs must be buried within the barangay, so as not to spread the virus to other areas. Thus, Cabel said that the barangay captain recommended Pook Arboretum as a location for the burial site to the UP Chancellor Michael Tan, who permitted it.

To Cabel’s knowledge, the barangay held a dialogue with the residents before proceeding with the burial. However, according to the city veterinarian and as mentioned beforehand, barangay officials have only to meet with piggery owners to discuss the culling and burial of pigs. Pook Arboretum residents said they were never briefed about the burial.

“Magwawala ba kami ng ganito o mag-aalsa ba kami kung meron kaming information? (Will we be this outraged, will we be protesting if we were informed?)” one resident said.

Residents say authorities started coming in on the afternoon of November 21. A hole with a depth of 12 feet was dug by a backhoe. Cabel said that the 12-foot measurement is required to allow for the bloating of pigs when the bacteria sets in.

Barangay public safety officers stood guard around the area while the burial was taking place. Witnesses could not move closer or document the event for fear of being apprehended.

Children who often loiter near the burial site saw the trucks, the authorities, and even the pigs, but were not briefed at all about what was happening.

Cabel said that the burial site must be 100 meters away from residences. However, residents were concerned because the burial site is right next to the trail where they walk to and from their homes every day.

“Magdedecompose naman ‘yan, bigyan lang ng time, kalilibing [lang] kasi (The pigs will decompose, they just need to give it time, they have just been buried),” Cabel said.

What next? The burial site will be disinfected daily for a week to prevent the spread of bacteria, said Cabel. The site will be sprayed with disinfectant and lime to counter the smell as well.

Quezon City Urban Poor Coordinating Council spokesperson Carmelita Collado said a resident saw a city hall employee and a member of the University of the Philippines Office of Community Relations task force pouring disinfectant on the site the day after the burial.

According to Lando Bantegui, president of the Samahan ng mga taga-Pook Arboretum (SMPA), another pile of dirt was also put on top of the burial site. He worries that it will just be a recurrent process whenever the smell would get overwhelming. “It’s just the same. In the next instance, they’ll just do it again,” he said in Filipino.

Since residents were not briefed regarding the burial, they were left in the dark regarding the procedure for burying infected pigs, as well as any possible effects on their health. Even Cabel was unaware of the health risks, but admitted that bacteria could spread.

On November 28, the Quezon City ASF Validating Team denied the burial was done secretly, saying consultative meetings were held with barangay officials, hog raisers, and the UP administration. The team added that the approval of the burial site was concurred by “all concerned stakeholders.”

They added the Quezon City Veterinary’s Office, Environmental Protection and Waste Management Department, and Health Department identified the site as the “best area” for the pigs’ burial.

“We reiterate that ASF is a non-zoonotic disease that infects only pigs and not humans. We assure residents that even if burial sites are within their community, it will not endanger human health,” the statement read.

However, the validating team also warned that burial areas should be off limits, since humans can also be carriers of the virus and may spread it to other areas where hogs are raised.

(If even pigs, dead pigs were kept secret from the residents, what will the barangay, Quezon City hall, OCR, and other government agencies keep from us next? What if in the future, people will be buried here? What then?)

Collado did not see the burial as an isolated case. It was not the first instance that Pook Arboretum was used as a site for disposal.

(In the history of Pook Arboretum, it has been used as a dumpsite for garbage. There was a time in the early 80s that it was also used as a dumping ground for salvage victims. And just recently, in the time of tokhang, even though Pook Arboretum residents were not victimized, they would just find the corpses.)

This was how Collado described Pook Arboretum, an area that has witnessed not just death, but also impunity.

During the block meeting about the incident, one of the more senior women named Aling Pining was asked to recount what she saw on the day of the burial. Before giving her account, Bantegui jokingly warned her: “Siguro sentensya niyo mga anim na buwan lang naman (Your sentence could probably take up to 6 months).”

She then proceeded to talk about what she saw. Other witnesses were not as eager.

(They are afraid because they saw the police. They were not allowed to come forward. There were also members from the barangay and city health department. What else do you need? One battalion of soldiers? Now they are afraid to speak up. The witnesses who were supposed to speak up are now afraid.)

However, the residents of Pook Arboretum still have a lot of fight left in them.

They plan to rally at the UP Board of Regents office on November 28 to protest how the burial was conducted. Will they get be granted the dialogue that was denied of them? – Rappler.com