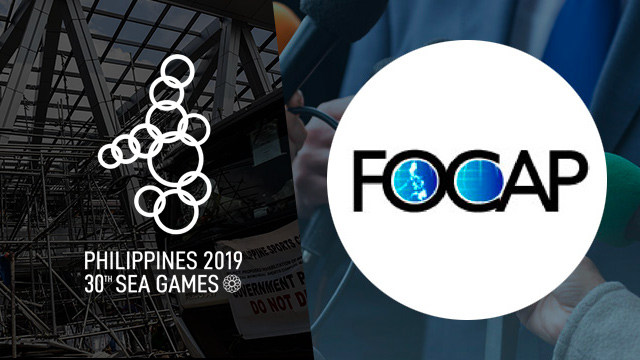 “Independent journalists report problems and issues imbued with public interest as they happen and become evident and do not delay the time to press for accountability,” the Foreign Correspondents Association of the Philippines (FOCAP) said in a statement released Thursday, November 28.

“We report defeats and victories, failures and triumphs,” FOCAP added.

Days before the opening ceremonies on Saturday, November 30, the Philippines’ hosting of the SEA Games made headlines following backlash over logistical blunders, insufficient food for delegates, and workers racing to finish the construction of venues.

While most Filipinos online were embarrassed by the SEA Games fiasco, others took a swipe at the Philippine media for reporting the government’s lack of preparedness for the event.

The National Union of Journalists of the Philippines also denounced the organizing committee for attacking the media over their shortcomings. (READ: Don’t blame media for SEA Games woes – NUJP)

FOCAP also slammed House Speaker Alan Peter Cayetano, who serves as PHISGOC chairman, for insinuating that there were attempts to bribe the media to put the Philippines’ hosting of the SEA Games in a bad light.

“Such sweeping accusations, without a shred of evidence and laced with threats of libel suits, are totally unacceptable and tend to intimidate journalists from reporting irregularities objectively,” FOCAP said.

Cayetano has been under public scrutiny following the controversial P50-million cauldron slated for use during the games’ opening ceremonies. (READ: ‘Kaldero ng Diyos’: Netizens shocked by P50-million SEA Games cauldron)

In a press conference on Thursday, Cayetano said he is ready to face all investigations on the said anomalies and blunders. (READ: Cayetano dares critics: ‘Hold me accountable’ for SEA Games mess)

Meanwhile, Spokesperson Salvador Panelo said some criticisms should be taken seriously, and announced that Malacañang would conduct an investigation, separate from that of the Senate, into the SEA Games fiasco.

In a statement sent to media, PHISGOC said that they are willing to participate in any form of investigation relating to the management of the SEA Games after the event’s conclusion on December 12.

PHISGOC also said that they were victims of fake news because the media reported the mishaps ahead of the official opening of the event. They said the proliferation of fake news about the event should also be the subject of inquiry.

“Presidential Spokesperson would agree with this as he himself was a victim of fake news,” PHISGOC said.

Amid all the controversies hounding the event, PHISGOC assured the public that the Philippines’ hosting of the SEA Games would be a success. They called on Filipinos to unite to make this happen.

PHISGOC’s full statement is below:

The Organizing Committee remains focused on ensuring the success of the Philippine hosting of the 30th SEA Games, and assures the public that all government regulations have been observed in this great endeavor.

Our Chairman has declared numerous times that we are willing to participate in any form of investigation on the 30th SEA Games, after its conclusion on December 12.

We agree that during the inquiry, we should be investigating too the proliferation of Fake News a few days before the Opening Ceremony, which has put the organizing committee, the Games, and the country in a bad light.

Presidential Spokesperson would agree with this as he himself was a victim of Fake News.

For now, we call on all Filipinos to stand together as one nation, one Team Philippines. Only in unity can we truly say that We Win As One!