Nov 29, 2019 6:19 PM PHT
Ryan Macasero
Facebook Twitter Copy URL
Copied
The times they can sell and the size of their tables will be restricted 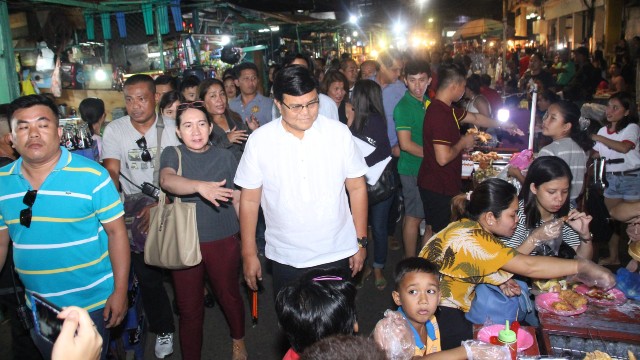 MANILA, Philippines – Over a month after clearing vendors from the sidewalks across the city, Cebu City Mayor Edgardo Labella will allow vendors to return to the sidewalks under certain conditions.

“The city has the responsibility under the Local Government Code to implement the general welfare for all but at the same time, we also need to consider that the vendors are also doing their livelihood. We have to balance all the interest,” the mayor said.

The announcement came a week after a video went viral of a vendor who was manhandled by personnel of the city’s beautification team. (READ: Cebu City mayor orders probe into manhandling of street vendor)

Members of the local vendors association complained that their daily earnings have taken a hit since being moved to the relocation site.

Labella said he would allow them to return to their original spots before they were cleared prior to an assessment by the Department of Interior and Local Government (DILG) assessment in October.

But they would be restricted to selling on weekends (Saturday and Sunday). They will be allowed on Colon Street, Osmena Boulevard, and Kaohiong Street, where there was a heavy vendor presence prior to the clearing.

“But we need you to be disciplined,” Labella said.

They can also sell at the night market between 6 pm to 2 am, but only until the end of the Sinulog festival in January next year.

The vendors’ carts also have to be no bigger than 2 feet by 2 feet.

In the long term, Labella is looking to get carts designed by world-renowned Cebuano designer Kenneth Cobonpue.

Members of the vendors association who were displaced will also get P20,000 in financial assistance from the city. – Rappler.com