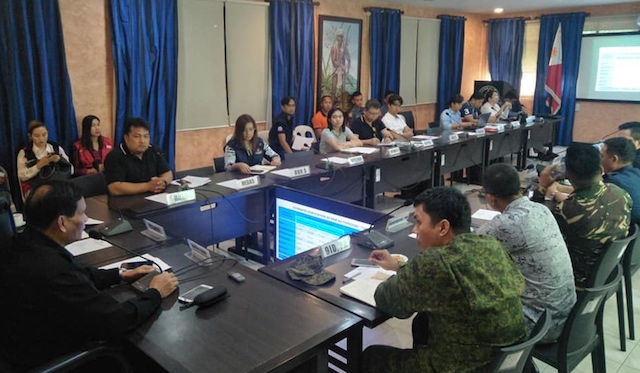 LEGAZPI CITY, Philippines – Officials in Bicol held disaster preparedness meetings on Friday, November 29, as the country braces for Typhoon Kammuri, which is is expected to enter the Philippine Area of Responsibility between Saturday, November 30, and Sunday, December 1.

The Office of Civil Defense (OCD) in Bicol convened a meeting of regional disaster officials and representatives from government agencies to prepare for Kammuri.

OCD regional director Claudio Yucot called the briefing to discuss contingency measures and other preparations to ensure zero casualty in the region.

In another meeting, Albay Governor Al Francis Bichara directed provincial disaster officials  to prepare for the evacuation of residents in landslide and flood prone areas in the province.

“We are enforcing the province-wide suspension of classes for all levels in public and private effective on Monday, December 2; and Tuesday, December 3,” Bichara said.

Code While Alert was also raised in Albay beginning Friday, which means that all health personnel are on call for immediate mobilization to respond to any emergency situation.

According to the Philippine Atmospheric, Geophysical, and Astronomical Services Administration (PAGASA), Kammuri, to be named Tisoy once it enters PAR, is expected to affect the Bicol region and neighboring areas.

The typhoon is forecasted to make landfall on December 3.

PAGASA said in a news briefing on Friday that Kammuri’s track may be similar to that of Typhoon Glenda (Rammasun) in 2014 and Typhoon Reming (Durian) in 2006.

Bicolanos started to pray the oratio imperata or obligatory prayer against inclement weather and natural disasters after it was introduced by Legazpi Auxiliary Bishop Lucilo Quiambao. This was after Typhoon Reming killed more than 1,000 people in Albay despite preemptive evacuation carried out in the province.

Aside from praying, Baylon also asked Bicolanos to be vigilant to prevent loss of lives.

“Let us prepare and work for zero casualty. Let us care for the most vulnerable among us,” the prelate said.

The oratio imperata against inclement weather and natural disasters is prayed and recited in Albay parishes in all masses even without the bad weather disturbances, because of past experiences.

Kammuri or the potential Tisoy would be the Philippines’ 20th tropical cyclone for 2019. (WATCH: What can you do to prepare for disasters?) – Rappler.com