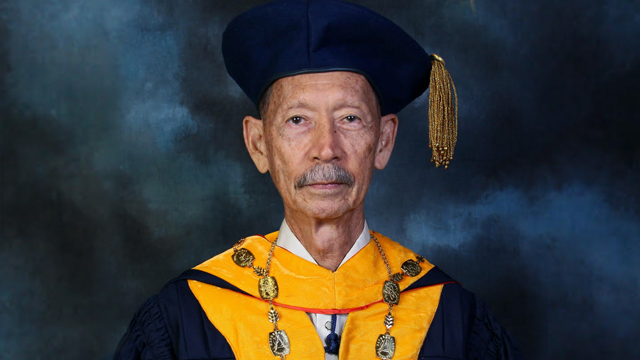 MANILA, Philippines – National Scientist Edgardo Gomez, who pioneered research on the state of coral reefs on a national scale that sparked worldwide conservation efforts, died at the age of 81 on Sunday, December 1.

The Department of Science and Technology (DOST) announced Gomez’s death in a statement on Tuesday, December 3.

Gomez, an authority in marine science, was a known researcher, scientist, conservation advocate, and mentor in invertebrate biology and ecology, giant clam culture and restoration, and coral reef assessment and conservation.

“Through his pioneering research, he was able to steer the world’s first national-scale assessment of damage to coral reefs that led to the widespread concern over the status of coral reefs. This resulted to the worldwide conservation initiatives, such as the Global Reefs and Risk Analysis, Global Coral Reef Monitoring Network, and the International Coral Reef Action,” the DOST said.

Gomez, who served as the founding director of the Marine Science Institute (MSI) at the University of the Philippines (UP), was also known for his contribution to the baseline mapping of the Philippines in relation to the West Philippine Sea, and also the groundwork for the  UP System’s Archipelagic Studies Program.

Gomez was among the scientists who sounded the alarm on the environmental impact of China’s reclamation activities in the West Philippine Sea that harm coral reefs, the area’s rich biodiversity, as well as the food security of those dependent on it like the Philippines.

Gomez had studied how the massive scale of China’s construction over the rocks and shallow reefs in the West Philippine Sea was a clear source of environmental concern, as this involved dredging sand from the ocean floor and dumping it over entire coral reef systems. (READ: An environmental turn in the South China Sea disputes)

He served as member of the American Association for the Advancement of Science, Western Society of Naturalist, World Mariculture Society, National Research Council of the Philippines, and the International Society for Reef Studies.

In 1989, the United Nations Environment Programme honored him as part of the Global 500 Roll of Honour.  The Philippine Civil Service Commission conferred on him the Presidential Lingkod Bayan Award in 2000.

Gomez was elected as a member of the National Academy of Science and Technology Philippines (NAST PHL) in 1993 and was proclaimed as National Scientist in 2014. – Rappler.com