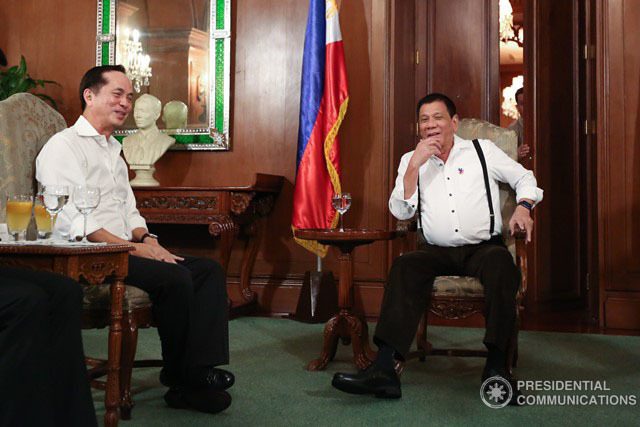 Facebook Twitter Copy URL
Copied
‘I will see to it that you're out,' says President Rodrigo Duterte, claiming he is still angry at ABS-CBN for supposedly not airing his political ads in 2016

MANILA, Philippines – The Philippines’ biggest television network will lose its franchise next year, vowed President Rodrigo Duterte in a fresh rant against “oligarchs” on Tuesday, December 3.

“Ang iyong franchise mag-end next year. If you expect ma-renew ‘yan, I’m sorry. I will see to it that you’re out,” said Duterte during a speech in front of new government officials at Malacañang.

(Your franchise will end next year. If you expect it to be renewed, I’m sorry. I will see to it that you’re out.)

This is his 3rd time to make the threat.

If the bill renewing the franchise does not get signed into law, ABS-CBN would have to close down its radio and television operations.

Duterte repeated his threat to ABS-CBN as part of a larger diatribe against powerful corporations he accused of “screwing over” the government, like Ayala Corporation and Manny Pangilinan’s Metro Pacific Investments Corporation.

In April 2017, Duterte accused the network of “swindling” him for not airing his paid political advertisements during the 2016 presidential campaign.

House Speaker Alan Peter Cayetano, Duterte’s running mate in 2016, said he too has a “personal complaint” against the network.