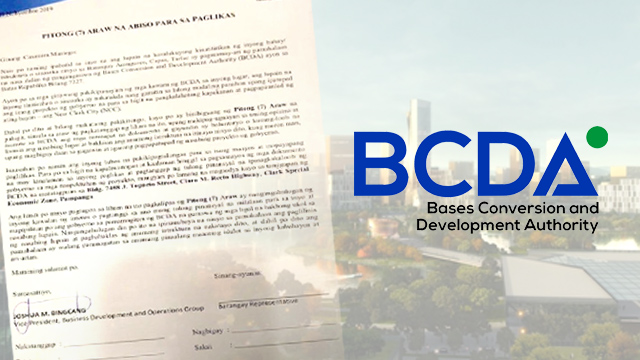 ZAMBALES, Philippines – The Bases Conversion and Development Authority (BCDA) defended the 7-day eviction notice it sent to Aeta families to give way to the New Clark City development project in Capas, Tarlac, saying it was a “standard follow-up” to notices issued to affected communities in the past.

A copy of the letter went viral earlier this week, asking the indigenous families to leave their farmlands and settlement areas.

(We would like to inform you that the land where your house/structure stands or which you till in Barangay Aranguern, Capas, Tarlac, is government property, which the BCDA administers per Republic Act Number 7227.)

(Give this, and as a humane gesture, you are hereby given a grace period of 7 days from the date of receipt of this letter, to coordinate with our office and submit required documents to the BCDA as well as voluntarily leave the are and dismantle any structure you have built here, if any, to give way to the immediate implementation of the aforementioned government project.)

After the backlash online, the BCDA published a statement on its website on Thursday, December 5, saying, “The seven-day notice issued by the [BCDA] is a standard follow-up letter sent to all claimants who rejected the financial assistance offered by government.”

The BCDA added: “There are no targeted Aeta communities. The notice was given to all claimants to inform of the need to start the construction of the New Clark City to Clark International Airport access road in that particular area.”

The BCDA said a “financial assistance package amounting to P300,000 per hectare (or P30/sqm) has been made available by BCDA to all project-affected people, including indigenous peoples (IPs) and farmers even at the start of the development.”

“Relocation sites have also been provided by BCDA within New Clark City for those whose residential structures were affected,” it added. – Rappler.com