Bicol workers get due payment, employment benefits through DOLE’s SEnA 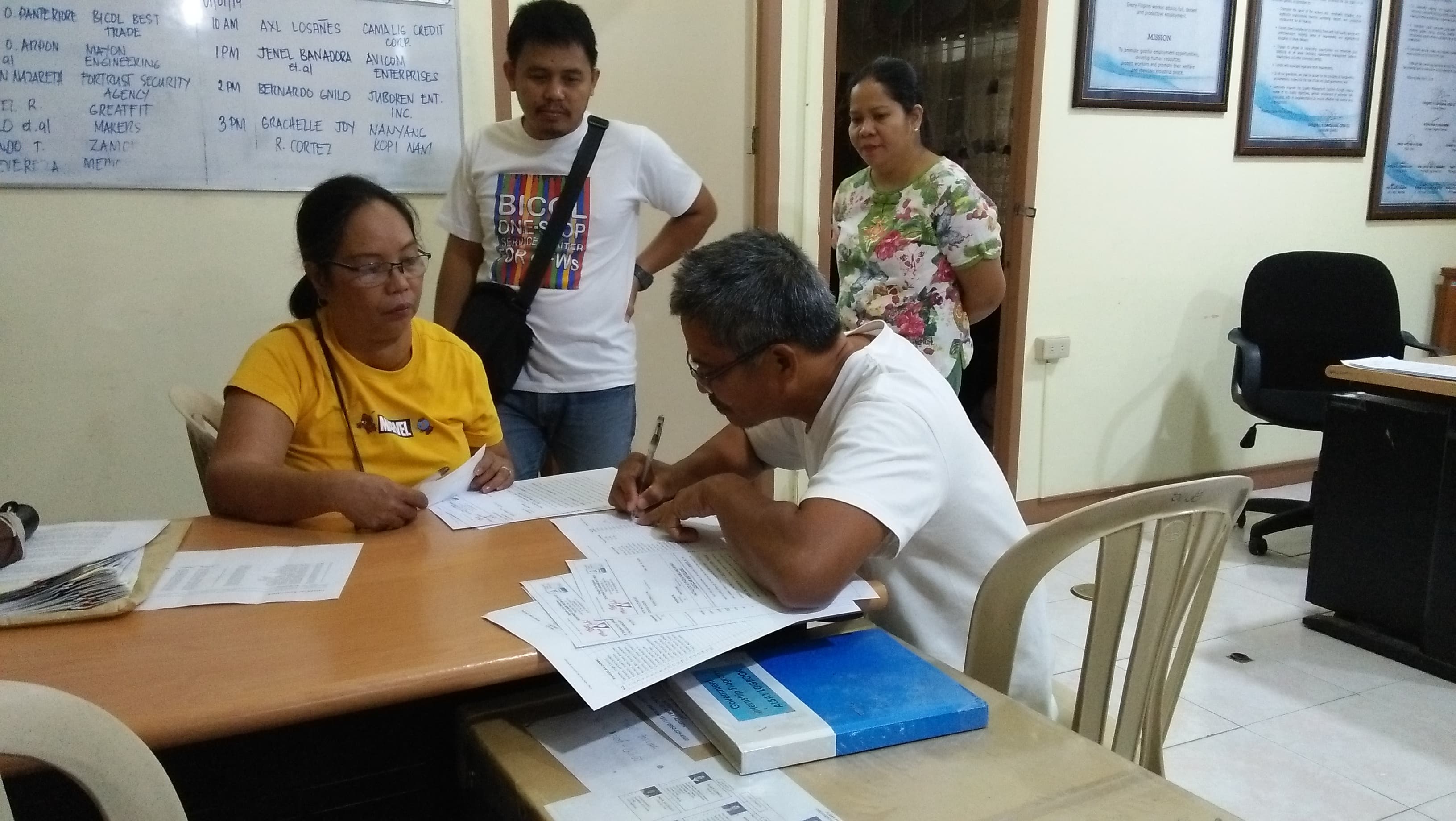 MANILA, Philippines – Janitors, welders, construction workers, and drivers got their separation payments and other employment benefits after raising their concerns to their respective Department of Labor and Employment (DOLE) offices in the region.

One of them was Godofredo Dimaano, a construction worker from Sorsogon province. He said he would have been blind if not for the help provided by the Single Entry Approach (SEnA) program.

The SEnA program gives workers access to a speedy, impartial, and inexpensive settlement procedure for all issues or complaints arising from employer-employee relations.

It is DOLE’s banner program, ensuring all complaints first go through a 30-day mandatory conciliation and mediation period to exhaust possible means towards a fair settlement, before they are referred for arbitration.

Some metal particles went into Dimaano’s left eye while he was installing GI sheets using an electric drill on the roof of Bonga Elementary School. This was due to his not wearing a pair of goggles, a personal protective gear his employer should have provided for him given the hazards of his work. This resulted in swelling and irritation in his left eye, but “the employer neglected to provide medical assistance to the worker and considered the complainant terminated,” according to SEnA Desk Officer Russell Ulysses Nieves.

On October 27, 2019, Dimaano was fully compensated by his employer for his back wages and other monetary benefits including cash payments for his premium to SSS, PhilHealth and PAGIBIG in the amount of P18,310 excluding his medical treatment. On-site inspections, including for other ongoing projects in the area, were also recommended.

Dimaano expressed gratitude to DOLE for immediate action on his complaint through settlement with his employer.

Thirty-one year old Maria Elena Bonite from Malinao, Albay, who worked for 5 years in a private agency as a janitress, also received her deserved separation fee after she sought help from Sena Desk Officers (SEADO) in her province.

Ching Banania, of SEADO Albay, said that the workers (comprised of janitors and drivers) sought their assistance in September because they were not amenable to the separation pay previously offered by their employer.

A total of PhP256,000 was tendered by OMNIWORX Inc. to all 17 concerned employees including Bonite.

Like Bonite, a co-worker said he would not hesitate to raise labor concern to the department because he believes in its service.

He added that the settlement procedure was smoothly executed after the series of mandatory conferences between them and the employer. This was after the management was hesitant to provide the said benefits in the beginning. 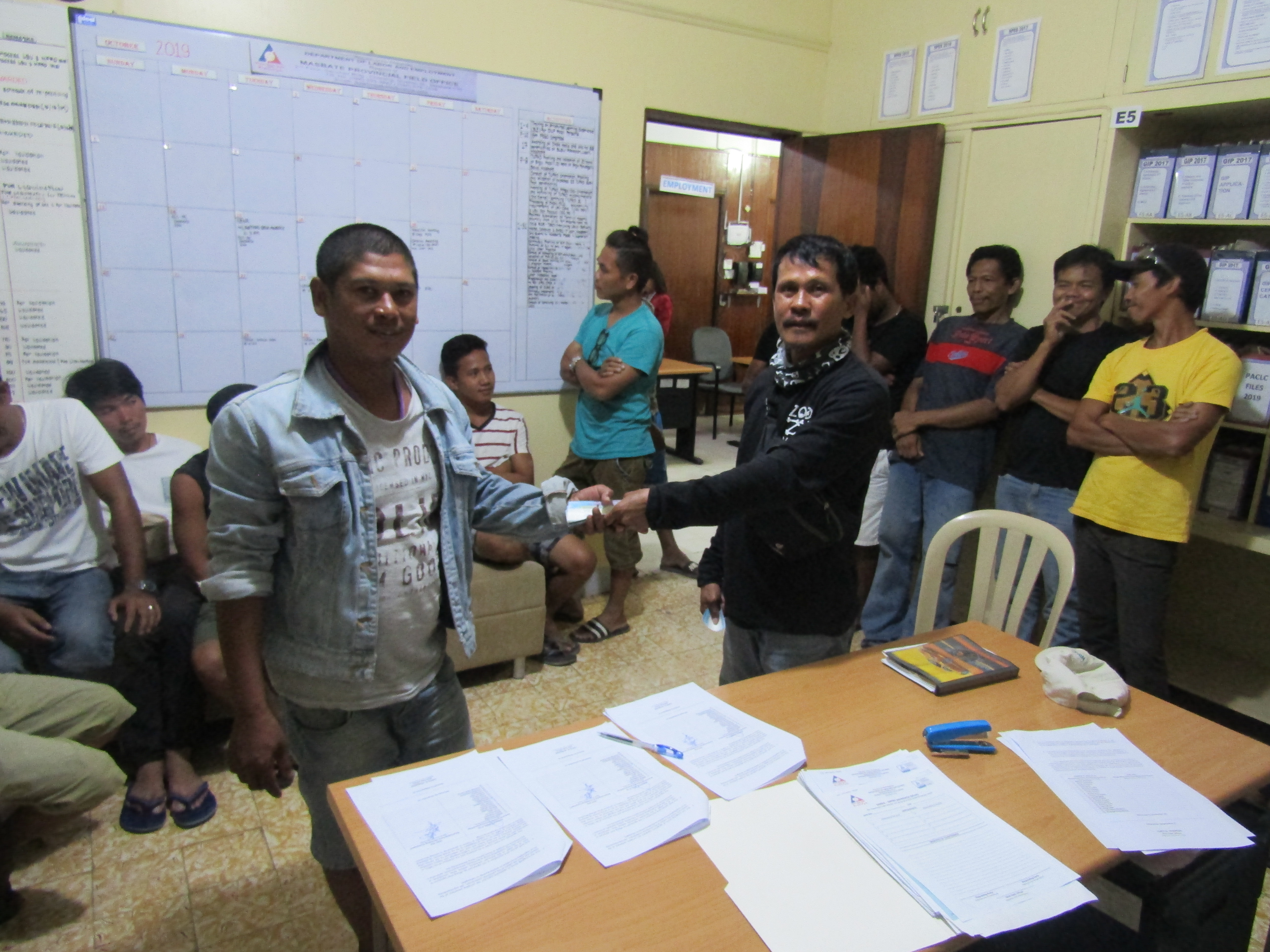 Eighteen displaced welders in Masbate also received a total of P180,000 from their employer as monetary considerations for the services rendered to the company.

According to Romnick Abas, they were hired as welders in the construction of a coal-fired power plant at Barangay Tugbo, Masbate City.

Towards the completion of welding works, their services were no longer necessary and they were subsequently terminated.

Yacky Genova, who has 5 children to feed, thanked DOLE for the immediate settlement and release of the monetary claims due them, especially as she has no regular job.

Chito Atibagos of SEADO Masbate believes that the social justice principle works by ensuring that “those who have less in life have more in law” and that was evident in the settlement of the two parties, he said.

Further, newly installed Regional Director Joel M. Gonzales lauded the cooperation of both parties and the immediate settlement and payment of monetary claims.

In the Bicol Region, 471 workers had claimed their monetary benefits in the amount of P8,009,034 in the first quarter of 2019 through SEnA.

Labor dispute issues that may be settled through SEnA include, among others: termination or suspension of employment issues; claims for any sum of money, regardless of amount; intra-union and inter-union issues, after exhaustion of administrative remedies; unfair labor practices; closures, retrenchments, redundancies, temporary lay-offs; OFW cases; and any other claims or issues arising from employer-employee relationship (except for occupational safety and health standards, involving imminent danger situation, dangerous occurrences /or disabling injury, and/or absence of personal protective equipment).