‘His heart is broken’: Vatican prefect Tagle breaks into tears 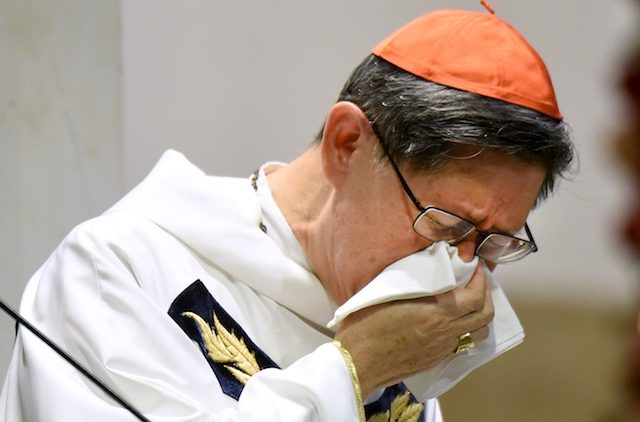 MANILA, Philippines – Manila Archbishop Luis Antonio Cardinal Tagle broke into tears in his first public Mass after Pope Francis named him prefect of a powerful Vatican office, an assignment that most likely entails leaving the Philippines.

Archbishop Gabriele Giordano Caccia, the Vatican’s outgoing ambassador to the Philippines, described Tagle’s feelings in a brief message at the end of the Mass for the Feast of the Immaculate Conception on Monday, December 9.

“What I like about the Filipino people is that you are always smiling even if you are suffering in your heart. And the Cardinal was smiling during his homily, but I know that his heart is broken,” Caccia said.

Caccia added: “Mary said yes. The Cardinal said yes. We should say yes, because God knows better what is good. But I would like that our yes would be like the yes of Mary – not just accepting something that we cannot change, but saying, ‘If this is the will of God, I am happy to let you go.’”

Caccia urged Filipinos to wholeheartedly “give the Cardinal to the bigger Church.” The Pope named Tagle on Sunday, December 8, as prefect of the Congregation for the Evangelization of Peoples, one of 9 offices at the highest ranks of the Vatican bureaucracy. The Archdiocese of Manila has not confirmed whether Tagle will remain its archbishop, but church insiders said it is likely that he will leave Manila and be based in Rome.

This situation has made Tagle emotional, crying several times during Monday’s Mass in honor of the Immaculate Conception, patroness of the Philippines.

In his homily, Tagle spoke about submitting to God’s will even if one already planned a “story line” for one’s life. For many who heard it, Tagle’s homily seemed to allude to his own experience, with a new Vatican appointment expected to cut short his stint as Manila archbishop.

Tagle recalled Mary “who already had her plans” before the angel Gabriel announced she will bear Christ in her womb. “Her story line had already been written by Mary and Joseph, but then an angel, a messenger, comes, proposing a story from God.”

“And we are held in suspense: ‘What will this lady do? Will she insist on her own narrative, just like Adam and Eve? Or will she engage in dialogue with God?” he said.

“And finally, we hear the words, ‘Behold the handmaid of the Lord. Be it done to me according to your word,’” Tagle added, his voice breaking, his eyes welling up with tears. – Rappler.com