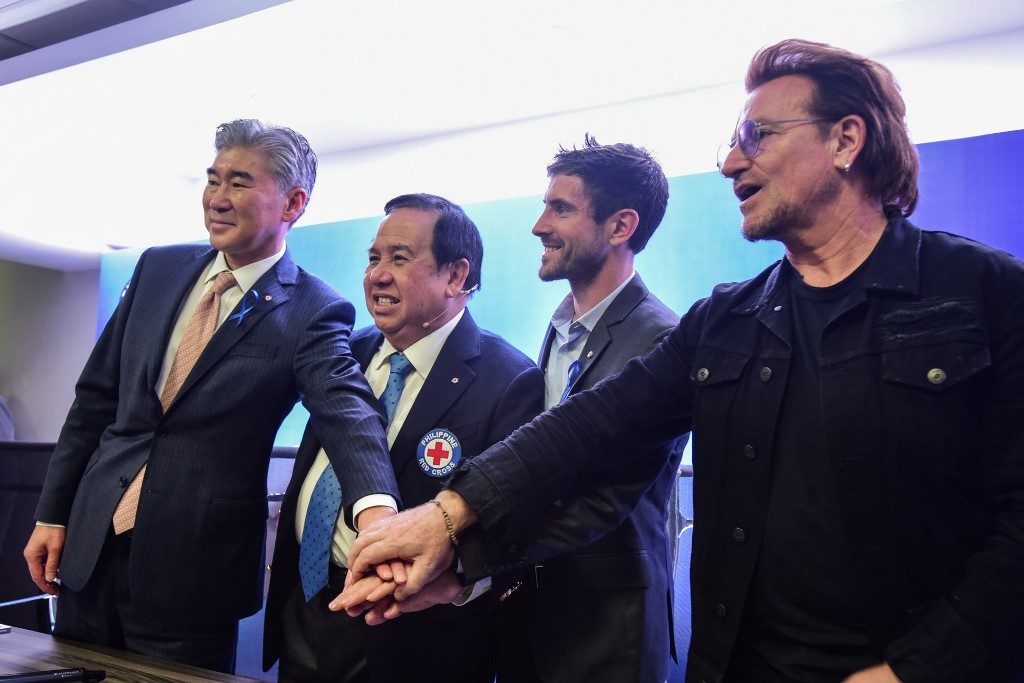 Facebook Twitter Copy URL
Copied
(UPDATED) Zipline, of which U2 frontman Bono is a board member, will partner with the Philippine Red Cross to deliver blood and medical products by drone in the Philippines by 2020

MANILA, Philippines (UPDATED) – U2 frontman Bono on Tuesday, December 10, led the launch of a national-scale drone blood delivery system in the Philippines.

Under the service, blood and other medical products would soon be delivered to health facilities in the country by drone.

The artist was among those who spoke about the initiative on Tuesday, December 10, as a board member of Zipline which will provide the service in partnership with the Philippine Red Cross.

Expected to launch in the summer of 2020, the blood delivery service aims to create a network of autonomous drones to make on-demand emergency deliveries. The project will begin with blood deliveries but will expand to 150 other medical products, according to Zipline and PRC.

The drone delivery company is set to establish 3 distribution centers, which are eyed to make “hundreds of deliveries per day.”

“This Red Cross chapter is the bravest and has the hardest time of any chapter. We are particularly inspired by the way the team already uses technology. The Philippines is an amazing country with amazing challenges when it comes to disaster response,” said Zipline CEO Keller Rinaudo.

“Your access to healthcare should not depend on the GPS coordinates of where you live,” Rinaudo added.

Expounding on Rinaudo’s point, Bono said, “Where you live should never decide whether you live.”

Bono said health program services are projects he “takes very seriously,” especially with his experience with the One campaign, a volunteer-led initiative meant to influence legislators to address problems confronted by the poor.

The initiative has also helped finance local programs to fight AIDS, TB, and malaria around the world.

“I saw up close how it was, not to get access to life-saving anti-retroviral drugs, I felt that ache, felt that space between the need and supply of that need,” he said.

Zipline is a company dedicated to “expanding universal health care coverage by providing on-demand instant delivery by drone of more than 150 critical and life-saving medical products, including blood and vaccines.” Health workers place orders to Zipline through text message. Deliveries to health facilities are to be expected within 30 minutes on average.

Zipline says that their drones can fly autonomously and can carry up to 1.8 kg of load while flying up to 145 kph, with a roundtrip range of 160 km “in high winds and rain.”

The company launched in 2016, and has since delivered blood to hospitals in Rwanda, worked with the US defense department, and partnered with the governments of Ghana and India. It says it wants to expand its reach to 700 million people in the next 5 years.

Bono – Paul Hewson – is known for his advocacy to alleviate poverty and promote health care. In 2005, he started the One campaign, a volunteer-led initiative meant to influence legislators to address problems confronted by the poor. The campaign has over 3 million volunteers in Africa, where it is seen to have made the most impact.

The initiative has energized the likes of Pepfar, the Global Fund, and Electrify Africa Act, among others. The initiative also helped finance local programs to fight AIDS, TB, and malaria around the world.

Bono is in town for U2’s first concert in the Philippines set on Wednesday night, December 11, at the Philippine Arena. – Rappler.com