On Human Rights Day, fight vs abuses continues amid crackdown under Duterte MANILA, Philippines – Groups on Tuesday, December 10, reminded Filipinos the importance of stadning up against repressive policies and fighting for human rights despite massive crackdown under the Duterte administration.

December 10 marks the International Human Rights Day and the anniversary of the Universal Declaration of Human Rights (UDHR), which the Philippines signed in 1948 together with 48 countries. (READ: Hate human rights? They protect freedoms you enjoy)

The Commission on Human Rights urged people to reach across aisles and come together to push back and call for “greater state accountability for all human rights violations in the Philippines and to end impunity that further aggravates the suffering of our people.”

“Now, more than ever, we must come together as a nation and build the broadest coalition of human rights defenders for freedom and dignity of all, and continue to push back as we reaffirm our commitment to fight for people’s rights and against all forms of attacks against the Filipino people,” the commission said.

In a statement, Karapatan said defending together is a must as the country faces problems brought about by Duterte’s looming “full-blown dictatorship.”

“Our collective action is a powerful weapon that has historically put tyrants in their place behind bars,” Karapatan secretary general Cristina Palabay said. “We are reminded that rights do not fall from trees, but that it must continuously be asserted, defended and fought for.”

According to the Philippine Human Rights Information Center (PhilRights), the dire situation of the public under Duterte should be addressed to evade further crisis.

(There is violence seen in policies and programs that mercilessly hurt and kill the basic sector. Blood continue to pour from the drug war, militarization, and continued neglect of justice for victims of human rights violations.)

The Duterte administration is hit for its threats and harassment of critics, including human rights activists, amid massive criticism over the President’s repressive policies, including the violent anti-illegal drugs campaign. (READ: Powering through a crisis: Defending human rights under Duterte)

Karapatan’s Palabay said that “instead of addressing its shortcomings, it would rather shoot the messengers and kill those who raise legitimate people’s concerns and issues.”

Data from Karapatan shows that at least 2,370 human rights defenders have been charged by the government from 2016 to 2019, the biggest number in more than a decade. (READ: Duterte’s war on dissent) 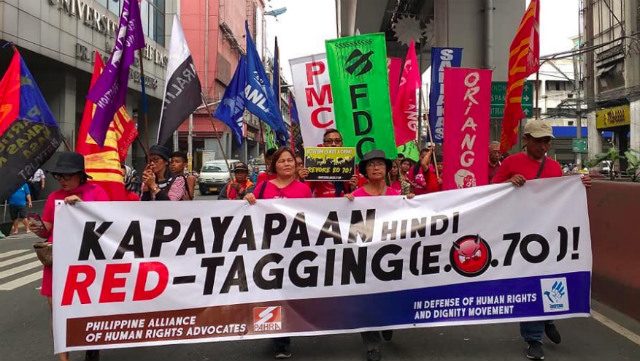 In October 2019, police raided several offices of progressive groups in Bacolod and Manila, accusing them of being fronts of the Communist Party of the Philippines. The groups, however, said the firearms and explosives recovered during the raids were planted.

Task Force Detainees of the Philippines (TFDP) reiterated that “when injustice becomes law, resistance becomes duty,” and called for the government to implement what they committed to do when they signed several international declarations outlining the protection of human rights and defenders in the United Nations.

“We are living in dangerous times again and many seem not to bother nor care that the whimsical and capricious display of vindictiveness of Duterte is eating the nation’s soul and trampling on people’s rights,” TFDP chairperson Father Christian Buenafe said.

Amid the current situation, In Defense of Human Rights and Dignity Movement (iDEFEND) and the Philippine Alliance of Human Rights Advocates (PAHRA) highlighted the need for “broadening civic spaces, for people’s solidarity, action and real change.”

But the existence of policies and programs that curtail such spaces, including Duterte’s repeated threats and harassment against civil society organizations and the media, betray the very nature of what the Philippines fought for when it signed the Universal Declaration of Human Rights in 1948.

“Implementing the above legislation and policy measures weakens our people’s ability to think freely and act responsibly to solve the problems in our society, due to fear of retribution or violence,” iDEFEND and PAHRA said.

“Shrinking civic spaces debilitates the capacity of the youth to forge a better future for themselves and their children, due to the punitive response by authorities that punish, rather than reward, critical thinking,” they added. – Rappler.com