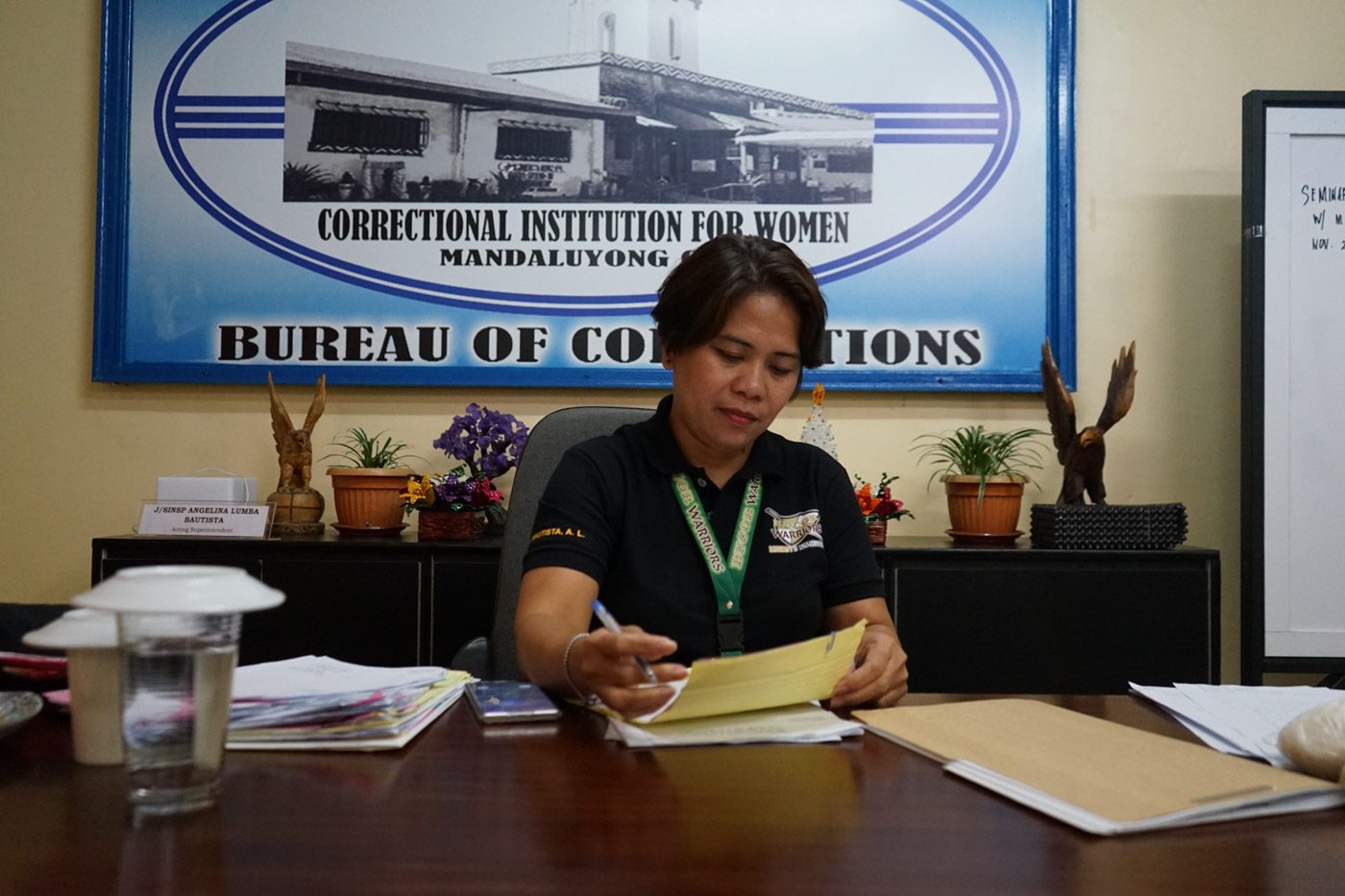 Facebook Twitter Copy URL
Copied
(UPDATED) Angelina Bautista, a retired jail senior inspector who used to cater prison meals budgeted at P39 per inmate in a day, is tapped as superintendent at the Correctional Institution for Women

MANILA, Philippines (UPDATED) – The private caterer who served meals budgeted by the Bureau of Corrections (BuCor) at P13 each for Correctional Institution for Women (CIW) prisoners was appointed to be the superintendent of the prison in November, Rappler learned.

Bautista retired from Bureau of Jail Management and Penology (BJMP) in 2015 as a senior inspector. She said she returned to government service after she was tapped by BuCor Director General Gerald Bantag for her “expertise.”

Bautista’s private catering business, V&J Trading, was awarded with a P21-million contract to serve meals to CIW inmates from July 1, 2018 to December 2018. The contract was extended to August 2019.

In a Senate probe into the GCTA law on October 3, Bautista said the BuCor spent only P39 per inmate a day for meals, although the budget allocation was P60.

“P39 per PDL (person deprived of liberty) po. Breakfast, lunch, and dinner,” Bautista said. This was enforced as early as July 2018.

The P21 balance was returned to the national treasury, according to Commission on Audit representative Director IV Irma Besas.

Bautista denies this is underfeeding the prisoners, claiming the P39, even if it is under the allotted budget, was still enough to feed an inmate in a day. The lawmakers present in the October hearing, however, didn’t think so.

From P50 in 2016, a prisoner’s meal allowance from the national budget was increased to P60 in 2018. But former BuCor chief and now Senator Ronald dela Rosa said in the October 3 hearing that even the actual budget at P60 was not enough for 3 decent meals a day.

Senator Ping Lacson had his own share of scolding BuCor for the underspent budget for inmate meals.

In the October hearing, Bautista said they were forced to cut down on prices so they could win the contract as lowest bidder.

Bautista said that during her time as caterer, she did not receive reports of inmates complaining about the food she served.

In the CIW, Bautista told Rappler that the budget for food for inmates was pegged at P68 per day. She is no longer the private caterer, but Bautista boasts of the quality of the food they served.

[We don’t have a problem with food here. Even if you interview (the inmates). Food here is great. I even advised the service provider to make sure the sick inmates are fed different meals.]

Rappler’s interviews with the CIW returnees, who now share rationed food with PDLs, contradict Bautista’s claims. The returnees said that they usually resorted to buying meals from neighboring houses in the compound because the food served to them was bland.

(It’s edible, but the taste is off. It’s bland. Sometimes, the chicken is like it’s been in stock for a long time.)

Another returnee said that they have to recook the meals sometimes just to make them taste better. A Bilibid inmate said the same thing.

In 2013, BuCor implemented a policy that disregarded the usual practice of choosing the lowest bidder for food provision for inmates. In the accomplishment report that year, the policy said “the focus is on selecting the contractor that can provide the best food nutritional content or prescribed daily caloric value.”

The policy change is not reflected in the conditions of Bilibid, and time will tell if it will impact in the CIW under a new leadership. – Rappler.com

Editor’s Note: An earlier version referred to Angelina Bautista as a former caterer of the National Bilibid Prison. This has been corrected.