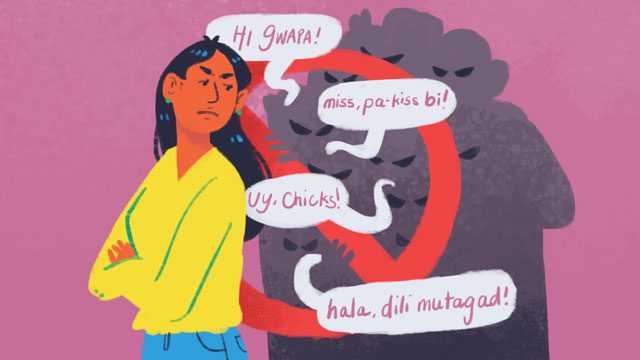 The Safe Streets and Public Spaces Ordinance, authored by councilors Alvin Dizon and David Tumulak, will take effect 15 days after its publication in newspapers of general circulation.

The ordinance defines catcalling as directing unwanted remarks or action toward a person, commonly done in the form of wolf-whistling and misogynistic, transphobic, homophobic, and sexist slurs.

Dizon said the ordinance was an attempt to localize Republic Act 11313 or the Safe Spaces Act of 2018, hoping it would create a gender-sensitive and safe environment for Cebu City’s residents.

Section 3 of the ordinance says all forms of gender-based harassment in public spaces, public utility vehicles, and institutions are illegal. Non-compliance of establishments would entail a fine of P3,000. Inaction on reported incidents entails a fine of P5,000.

Among the acts that would be considered as gender-based harassment on the streets and in public space are unwanted invitations, sexual comments or gestures, stalking, persistent telling of sexual jokes that demean or make any person uncomfortable, and even intrusive gazing or leering.

Cebu City takes after Quezon City’s Anti-Catcalling Ordinance in 2016 and Manila City’s passing of the Safe City for Women and Girls Ordinance of 2018 or Ordinance No. 7857. (READ: Curbing sexual harassment in public spaces ‘goes beyond policy’)

Minors are not excused from the ordinance, under Article 4, Section 3, of the ordinance. The Department of Social Welfare and Development will impose the necessary disciplinary measures when a minor commits the crime.

The ordinance orders the creation of an anti-sexual harassment hotline, which would serve as a frontline support for reports on gender-based crimes.

“We hope this ordinance will be strictly implemented so we could help guarantee a safer public space for our constituents, especially women, which is a fundamental human right,” Dizon said in a Sunstar Cebu report. – Rappler.com