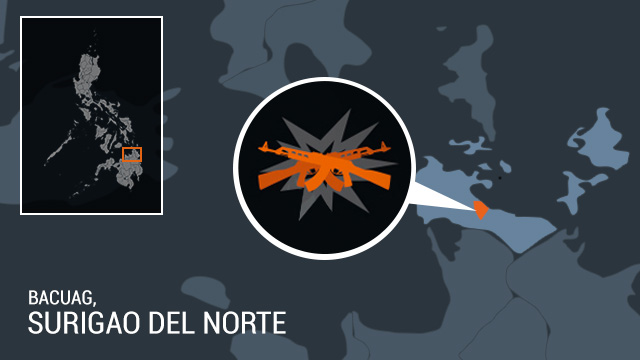 The annual plenum, usually conducted on December 26, is a gathering of leaders from the CPP, NPA, and National Democratic Front of the Philippines (NDFP).

Ka Oto, the spokesperson of the Guerrilla Front 16, Northeastern Mindanao Regional Command, said the situation in Bacuag is tense as soldiers from the 30th Infantry Battalion of the Philippine Army’s 4th Infantry Division were deployed in the town.

Oto warned media covering the plenum not to proceed as there was a security concern and their safety was not guaranteed.

The CPP-NPA-NDFP invited 15 journalists from Iligan, Cagayan de Oro, and Davao City to witness the celebration but were told around 7 pm not to proceed due to the tense situation.

Ka Oto said the decision to abort the plenum was made to ensure the safety of everyone in the area. The NPA is scheduled to conduct a mass wedding on December 30 for its fighters, and supporters and their families were invited.

But as soldiers have swarmed the coastal town of Bacuag, the security risk runs high and the NPA decided not to pursue the gathering.

“The gatherings would have been for the enlightenment of the state of the peace talk as we are returning to the negotiating table,” Ka Oto said.

The Armed Forces of the Philippines have earlier warned Local Government Units (LGUs) in hosting the annual celebration of the CPP.

The Philippine government and the CPP-NPA-NDFP have issued a bilateral ceasefire since December 23 up to January 8, 2020 but sporadic skirmishes were reported on the day the ceasefire was to take effect. (READ: AFP accuses communist rebels of violating Christmas truce)

Ka Oto blamed the Armed Forces of the Philippines as an unwilling party to the ceasefire.

In a statement on Sunday, December 30, Defense Secretary Delfin Lorenzana belied claims that it was the AFP that provoked skirmishes with the NPA.

“So they have a plenum? They can go ahead. Our troops are not prohibited from doing their other duties such [as] law enforcement and assisting the local populace,” Lorenzana said, as if saying that the plenum can continue amid the tension.

“The ceasefire prohibits them (soldiers) from engaging the NPA in combat. Our troops will only react in self-defense,” the defense chief added. – Rappler.com