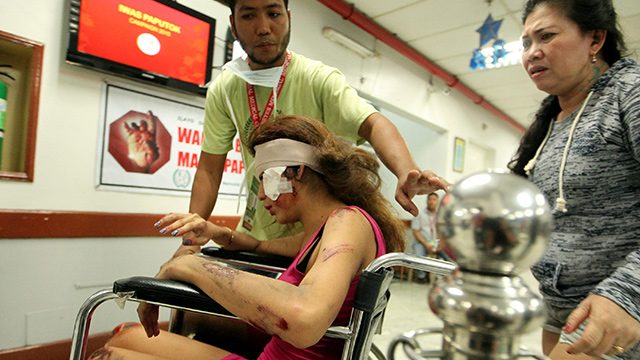 Facebook Twitter Copy URL
Copied
The number of this year's cases is now 4 cases higher compared to the same period in 2018, even with a reminder from the health department to skip fireworks for the holidays

MANILA, Philippines – The Department of Health (DOH) disclosed that there have been 54 reports of fireworks-related injuries among 59 sentinel hospitals since December 21.

The number rose by 8 cases as of 6 am on Monday, December 30, since the last update on Sunday.

Of the 54, half were due to illegal fireworks. The top firecrackers involved, in order, were piccolo, boga, and kwitis. Kwitis is legal, but piccolo and boga are not.

These reports come in despite the health department reminding the public to skip fireworks for the holiday season.

The DOH reported that all injuries were due to fireworks. So far, there was no reported death.

Most cases happened in Metro Manila, with 21 cases. Ilocos Region followed with 6 cases.

The DOH noted the case of a 13-year-old male in Nueva Ecija who was injured by a Cylinder, an illegal firecracker. He endured a “traumatic amputation” of the 5th digit and ring finger.

Most body injuries that happen affect the hands of the vicitms, followed by the eyes.

The Philippine National Police (PNP) warned that its officers would be patrolling areas where fireworks are sold, and would inspecting for illegal firecrackers.

President Rodrigo Duterte ordered to limit the use of fireworks to “communal displays” sanctioned by local governments to avoid accidents and injuries. – Rappler.com