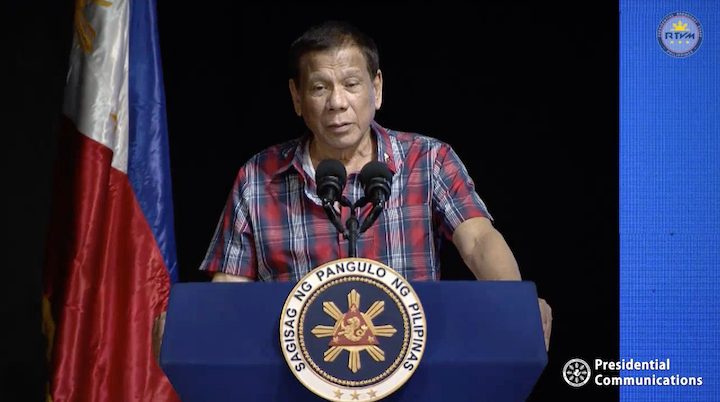 MANILA, Philippines – President Rodrigo Duterte on Monday, December 30, pushed for the construction of the Kaliwa Dam and the Wawa Dam to end the water supply problems in Metro Manila.

“These will be the last resort to have water for Manila,” Duterte said in a speech at a Digos City event for the victims of the Davao earthquake earlier this month.

“I will order them to go ahead, and we will pay the natives, and we will relocate them,” added the President.

The Kaliwa Dam project in Quezon will be funded by China, through loans secured by the Duterte administration. [ANALYSIS: Is the Kaliwa Dam actually viable?]

Civil society groups are opposed to the project, citing other viable alternatives that will not displace indigenous peoples nor cause environmental damage. (READ: The Illegal and immoral Kaliwa Dam ECC)

Meanwhile, the Wawa Dam project in Rodriguez, Rizal, got a go-signal from the Metropolitan Waterworks and Sewerage System (MWSS) in November, reported ABS-CBN News.

The project is an arrangement between Manila Water and a joint venture between Enrique Razon’s Prime Infra and the San Lorenzo Ruiz Builders Group.

Duterte then warned judges to be “sparing”  in issuing temporary restraining orders (TRO) which he argued were used by losing bidders to get something from government projects, which in turn delays implementation.

“I’m warning the judges that be sparing about issuing TRO. Otherwise, I will publicly announce that, ‘Do not follow.’ You follow the program of government,'” he added.

Duterte claimed that some judges issue TROs in exchange for money. “If [the TRO] is really a work of a legal mind, then maybe. ‘Pag hindi, pakain ko iyang TRO mo (If not, I’ll make you eat you TRO),” he said.

Before this, Duterte again blasted the owners of Manila Water and Maynilad for the alleged onerous contracts with the government. Former MWSS officials, however, had maintained that the provisions of the controversial water concession agreement signed in 1997 were “not onerous” because of the grave water supply situation at the time.

The MWSS also revoked the extension of the concession agreement with the two water firms. The contract will lapse in 2022.

Duterte blamed Manila Water President Jose Rene Almendras “and other Malacañang employees” for the “disadvantageous” concession contracts, which he claimed were “null and void from the very beginning.” (READ: Public interest, private hands: How Manila Water, Maynilad got the deal) – Rappler.com