After 2 and a half years, martial law ends in Mindanao 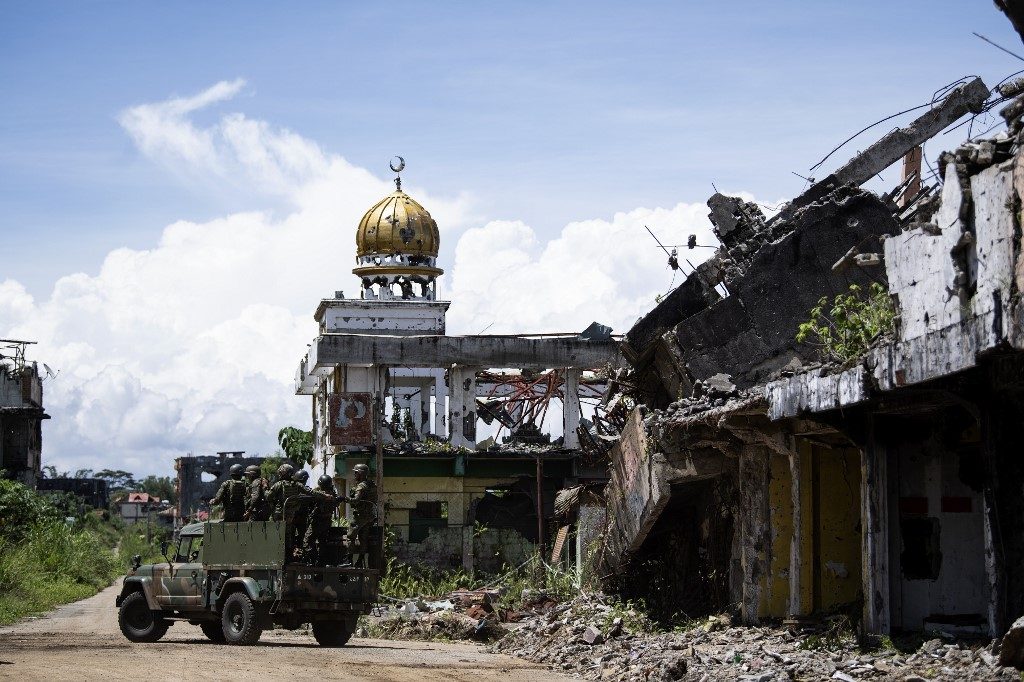 Facebook Twitter Copy URL
Copied
(UPDATED) Security officials say Mindanao is stable enough to carry on without martial law, even as they still battle terrorist groups and communist rebels in some areas

MANILA, Philippines (UPDATED) – The fourth iteration of martial law in Mindanao lapsed at 11:59 pm Tuesday, December 31, seen to end two and a half years of heightened military tension on the country’s southern main island.

“As martial law expires at 11:59 tonight, we are confident of an improved security climate in Mindanao that will work for the benefit of fellow Filipinos,” military spokesman Brigadier General Edgard Arevalo said in a statement.

“Specifically, where ML was an issue, it is expected to boost economic activities due to added investors’ confidence,” he added.

Still, Arevalo urged local governments and communities in Mindanao to “press on and build from the gains of [martial law] to maintain the strong security posture now in place.”

Arevalo also noted that Proclamation 55, or the declaration of a state of national emergency on account of lawless violence, is still in effect in case “isolated incidents of violence and lawlessness erupt in Mindanao.”

“Our people can then be assured that the Armed Forces of the Philippines will deploy to suppress any and all forms of lawless violence to prevent them from spreading and escalating not only in Mindanao but elsewhere in the Philippines,” he said.

In a statement on Friday, January 3, Presidential Spokesperson Salvador Panelo said that Proclamation 55 would help authorities deal with terrorism and the communist insurgency in Mindanao.

Duterte signed Proclamation 55 on September 4, 2016, following Davao City night market bombings on September 2 of that year. It has remained in effect since then.

The security situation in the region has improved much since President Rodrigo Duterte declared martial law on May 23, 2017, when terrorists from the Islamic State (ISIS) affiliate Maute group laid siege to Marawi City in Lanao del Sur, security officials said earlier in December.

Upon the recommendation of Defense Secretary Delfin Lorenzana, Interior Secretary Eduardo Año, the military, and the police, Duterte no longer asked Congress to extend the measure, as he did when it was supposed to expire in July 2017, and then in December 2017, and again in December 2018.

On Tuesday, Lorenzana reiterated the confidence of  security officials on maintaining the gains of the two-year martial rule in Mindanao.

“The security sector believes that the objective of the martial law has been achieved. The rebellion in marawi, Lanao del Sur and other areas in Mindanao have been effectively stopped. They are confident that they can maintain the current peace and order in Mindanao and that an attack similar in scale to Marawi cannot be waged by the remnants of the Mautes or by any other terrorist groups in the future,” the defense chief said.

A recent survey of private pollster Social Weather Stations revealed that 65% of Filipinos wanted martial law in Mindanao to end on December 31.

The 5-month battle that left Marawi in ruins, sporadic attacks from terrorists, and the lingering presence of several armed groups in Mindanao warranted increased powers for the police and military, Duterte and his security officials argued each time they lobbied for the measure’s extension.

The Bangsamoro plebiscite in January 2019 and the national midterm elections the following May were added reasons to keep the island under martial law for another year, the Executive argued before Congress in December 2018.

The measure faced strong opposition and criticism throughout, from lawmakers, civic organizations, and leftist groups, who argued that martial law could lead to human rights violations and other abuses by government forces.

Martial law meant increased police and military patrols and checkpoints. It also included the suspension of the writ of habeas corpus for rebellion and terrorism suspects, which meant they could be arrested and detained even without a warrant from a judicial court.

Some civic leaders and a member of Congress said they have either witnessed or suffered such abuses by the police and military.

Critics of martial law said it did not address the problems it was meant to solve, but instead bred more resentment among vulnerable communities, which could lead to more violence.

However, a study by conflict monitoring group International Alert Philippines released in September 2019 showed that the imposition of martial law was the “single most important reason” behind a considerable decline in conflict and violence in Mindanao in 2018.

The establishment of the Bangsamoro Autonomous Region in Muslim Mindanao (BARMM) in January 2019 marked a milestone in government efforts to establish peace in Mindanao. Led by members of the country’s largest Muslim rebel group, the Moro Islamic Liberation Front, the BARMM replaced a less powerful autonomous regional government, and it is expected to significantly lessen the impetus for violence among Mindanao’s Moro people.

As the Executive kept prolonging martial law, opposition lawmakers warned that it could become the “new normal” in Mindanao, which would affect not only its security but its economy, too.

In June 2019, Davao City Mayor Sara Duterte, the President’s daughter, voiced her opposition to martial law. It spooked investors and tourists, thus hampering economic growth, she said, adding that she would ask that her city be exempted if the measure was to be extended for another year.

Echoing the younger Duterte, the military said in late November 2019 that Mindanao was peaceful and stable enough to carry on without martial law, even with terror groups such as the Abu Sayyaf, the Bangsamoro Islamic Freedom Fighters, and the Dawlah Islamiyah Torayfie Group still threatening parts of the region. Security forces could continue battling them without martial law.

Terror attacks in some parts of Mindanao, including suicide bombings in Basilan in 2018, and in Sulu several times in 2019, raised questions about the efficacy of martial law. The military said then that there could have been more attacks if the region wasn’t under martial law.

The same threats from the same groups continue to hound Mindanao. Nevertheless, it’s time for it to move on, security officials said, which was why this time, they let martial law expire without anymore seeking another extension. – With a report from Sofia Tomacruz/Rappler.com