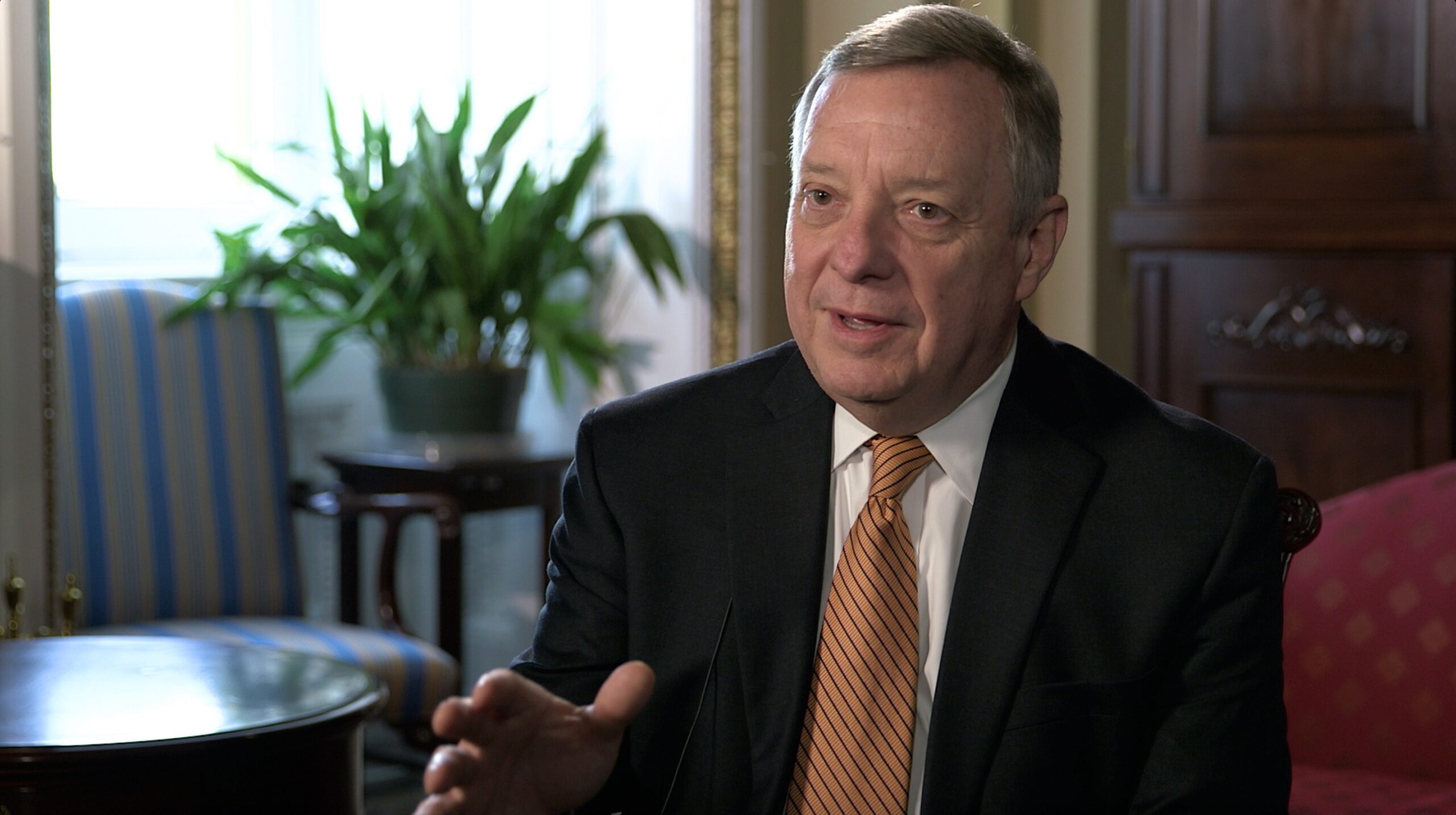 Facebook Twitter Copy URL
Copied
(UPDATED) The Democrat senator reiterates his call for the release of Senator Leila de Lima from detention, or a 'quick and credible' trial of the 'questionable' cases against her

MANILA, Philippines (UPDATED) – If President Rodrigo Duterte were to insist on his retaliatory visa restrictions against US citizens, Filipino-Americans would be the first to suffer, US Senator Dick Durbin of Illinois said in a statement reiterating his call for Senator Leila de Lima’s release from detention.

“Illinois is proudly home to a vibrant, hardworking Filipino community. The Duterte regime should stop threatening the travel of these Filipino Americans and so many others who travel between our nations, and instead release Senator De Lima or assure a quick and credible trial. This strong-arm tactic is an insult to the Filipino American community and the country’s democracy,” Durbin said on Tuesday morning, December 31, Philippines time.

Durbin, along with US Senator Patrick Leahy of Vermont, had introduced and pushed for the amendment in the US 2020 national budget law that bans Philippine officials involved in De Lima’s detention and persecution from entering the US. (READ: What we know so far: Proposed US sanctions vs PH officials in drug war)

On Friday, December 27, Duterte hit back at both Democrat senators by banning them from entering the Philippines, and threatening to require US citizens to apply for Philippine visas. Leahy described the move as “irrational.”

“Philippines human rights champion Senator Leila de Lima has been jailed for more than 1,000 days on highly questionable charges. Her release, which has been championed by groups such as Amnesty International – and now the US Congress – is unfortunately symbolic of the larger price one increasingly pays for peaceful dissent and honest journalism under President Duterte in the Philippines,” Durbin said in his statement on Tuesday.

Read my statement on the continued detention of Philippine Senator Leila de Lima by the government of the Philippines and President Rodrigo Duterte: pic.twitter.com/e4nsS8rvuy

An ‘affront’ to democratic norms

Durbin also mentioned Rappler CEO Maria Ressa, describing her and De Lima as voices who “face harassment and imprisonment for fostering honest coverage regarding the country’s sweeping extrajudicial killings, which is an affront to the cherished democratic norms we share with our long standing Filipino allies.”

De Lima faces illegal drug charges based on accounts from drug convicts from the New Bilibid Prison, who claimed that she used drug money to fund her campaign in 2016. The Duterte administration abetted the cases against De Lima, who was then leading a Senate investigation of widespread killings in the President’s war on drugs.

Ressa faces a slew of tax evasion cases, which came after Rappler reported extensively on extrajudicial killings in the drug war, and other irregularities in the Duterte administration. The government earlier tried to shut down Rappler by claiming it had partial foreign ownership, which Rappler’s managers have refuted.

US President Donald Trump signed the $1.4 trillion national budget law on December 23. It included the amendment mandating the US Secretary of State, currently Mike Pompeo, to prohibit the entry of Philippine officials about whom he has “credible information” of their involvement in De Lima’s arrest and detention.

Blogger RJ Nieto, who was among a list of people De Lima tagged as her persecutors, tried to discredit the US travel ban, claiming it was nowhere in the budget measure’s document itself. However, Durbin’s staff and De Lima explained that the US budget is outlined in several documents, such as the US State Department’s 2020 budget that clearly states the provision on De Lima.

Explanatory statements on the main document pointed these out, and Philippine officials have since acknowledged that the sanction is real. (READ: A tale of two justice secretaries: The De Lima-Guevarra balance)

In a dispatch from her detention cell on Tuesday, De Lima described the support she received from US lawmakers as a gift she had been longing for.

“This bipartisan support from high-ranking law-and-policymakers in the US has given me a gift I have been longing for: vindication,” De Lima said, seemingly alluding to her colleagues in the Philippine Senate that failed to give her just that.

“Because these veteran US public officials would not be standing with me if they had any doubt about my innocence or the fact that my persecution is an attack, not just against me personally, but against human rights and [human rights] defenders,” De Lima added.

De Lima thanked the American lawmakers for the successful inclusion of the travel ban on her persecutors, and said that the senators are the allies of Filipinos persecuted under the Duterte regime.

“Maria Ressa, me, and other advocates for democratic dissent and free expression have found formidable allies in you,” the detained senator said. – Rappler.com