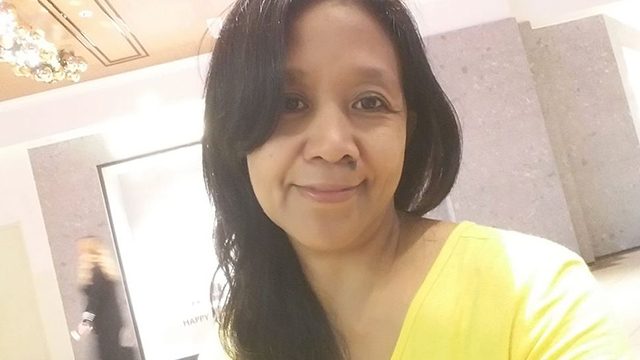 BAGUIO CITY, Philippines – The body of Arlyn Nucos, one of the two Filipina domestic help who were killed in a freak car accident at Lucky Plaza in Singapore, arrived home in San Carlos, Caba, La Union, on Thursday afternoon, January 2.

A queue of relatives and neighbors already lined up the narrow street leading to the Nucos compound at noon even as the hearse arrived at past 3 pm.

The family said the wake for Arlyn would be for two weeks.

The body of Arlyn, 50, arrived in the Philippines Wednesday night at the Ninoy Aquino International Airport and was met by her loved ones and officials of the Overseas Workers Welfare Administration.

If it’s any consolation for the Nucos family, Arcely, the other sister who figured in the accident, has regained consciousness on New Year’s Day after her operation at a Singapore hospital. (READ: 2 Singapore car crash victims are sisters from La Union)

Rose Adap Langbay Nucos, their sister in law who is also working as a domestic help in Singapore, wrote in her FB account: “After Po ng long operation that Ate Arcely under go yesterday, thanks God at conscious naman siya paglabas ng OR, it’s a very successful one, ah seems she’s quite ok now, but still not out from ICU coz still need to monitor her, another 1 more major operation around her pelvics well be doing for her soon and some small operations for the coming days, Ate Arcely is very strong so pls I’m begging everyone  keep on praying for her fast recovery!!”

The other casualty, Abigail Danao Leste, will be brought back to her hometown in Aparri this weekend.

“Separately, we just received an update that the daughter of the late Ms Abigail Danao Leste will not be coming over to Singapore as family members are worried about her making the trip,” Singapore’s Center for Domestic Employees (CDE) said.

“The family will be receiving the remains of the late Ms Abigail back home in the Philippines. The cousin of the late Ms Abigail who is currently working here in Singapore as a FDW has been requested by the family to settle the repatriation arrangements in Singapore, which is still an ongoing delicate process. The funeral in the Philippines will be a private affair and we seek everyone’s understanding to allow the bereaved family space and time to grieve. On behalf of the family, we thank everyone for all the support and condolences,” CDE added.

The Nucos sisters, who both had been working in Singapore for 30 years, were with their 3 bosom buddies last Sunday, December 29, having a picnic on the exit road pavement of the Lucky Plaza Plaza when a car from above suddenly accelerated backwards, fell off the railings and plunged into them.

Arlyn Nucos and Abigail Leste were instanly killed while the rest were injured, although two were discharged before New Year’s Eve.

Although they always took that spot every Sunday afternoon, their last meeting was especially festive as Arlyn was set to go home this January. As it turned out, she did come home but under more tragic circumstances. – Rappler.com