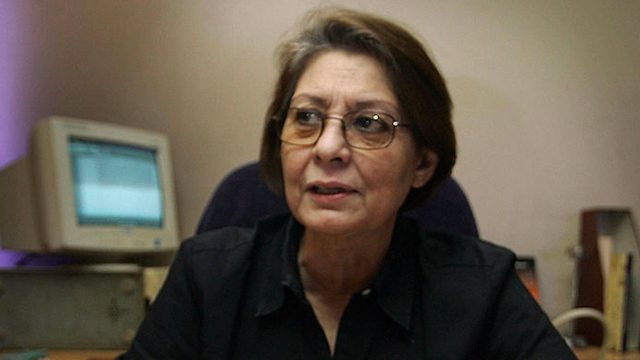 MANILA, Philippines (UPDATED) – Journalist and founding chair of the Daily Tribune Ninez Cacho-Olivares died on Friday, January 3. She was 78.

According to the Daily Tribune’s official Facebook page, Cacho-Olivares died due to a “lingering illness.”

“Through all the challenges that the newspaper went through, she had one stubborn purpose, which was to put the Daily Tribune to bed every day,” they said in the post.

Over the course of her career, Cacho-Olivares wrote for broadsheets like the Bulletin Today, Philippine Daily Inquirer, Business Day, and Business World.

She founded the Daily Tribune in June 2000 and continued to write for the paper even after it was acquired by Concept and Information Group Inc in June 2018.

Her last piece for her Daily Tribune column, “Frontline,” was released online early on January 3, the same day she died. Titled “‘Nuff said,” her last column criticized President Rodrigo Duterte’s staunch critic, jailed senator Leila de Lima, and the US senators who are calling for her freedom.

Cacho-Olivares also supported Duterte’s bloody war on drugs, saying in her column titled “Licking her wounds?” published on January 2: “A humane and death-free drug war? [Vice President Leni Robredo] must be dreaming. A death-free war is an impossibility – even in other countries with drug problems.”

In 2008, she was charged with libel due to a column she wrote, accusing a law firm of influence-peddling in the Ninoy Aquino International Airport Terminal 3 deal. She was sentenced to a minimum of 6 months to a maximum of 4 years in prison and was ordered to pay P5 million in moral damages and P33,732.25 in civil damages.

In a statement on Friday, Presidental Communication Secretary Martin Andanar expressed his condolences to Cacho-Olivares’ family, saying her death was a loss to Philippine media.

“Her strength in spirit and her strength in character was seen in how she pursued the continuance of her publication. Her fearlessness in sharing her socio-political opinions on public matters is something that her colleagues and friends will continue to remember and admire,” Andanar said as he described Cacho-Olivares as a “dauntless critic.”

“We are with her family in this time of grief,” he added. – Rappler.com