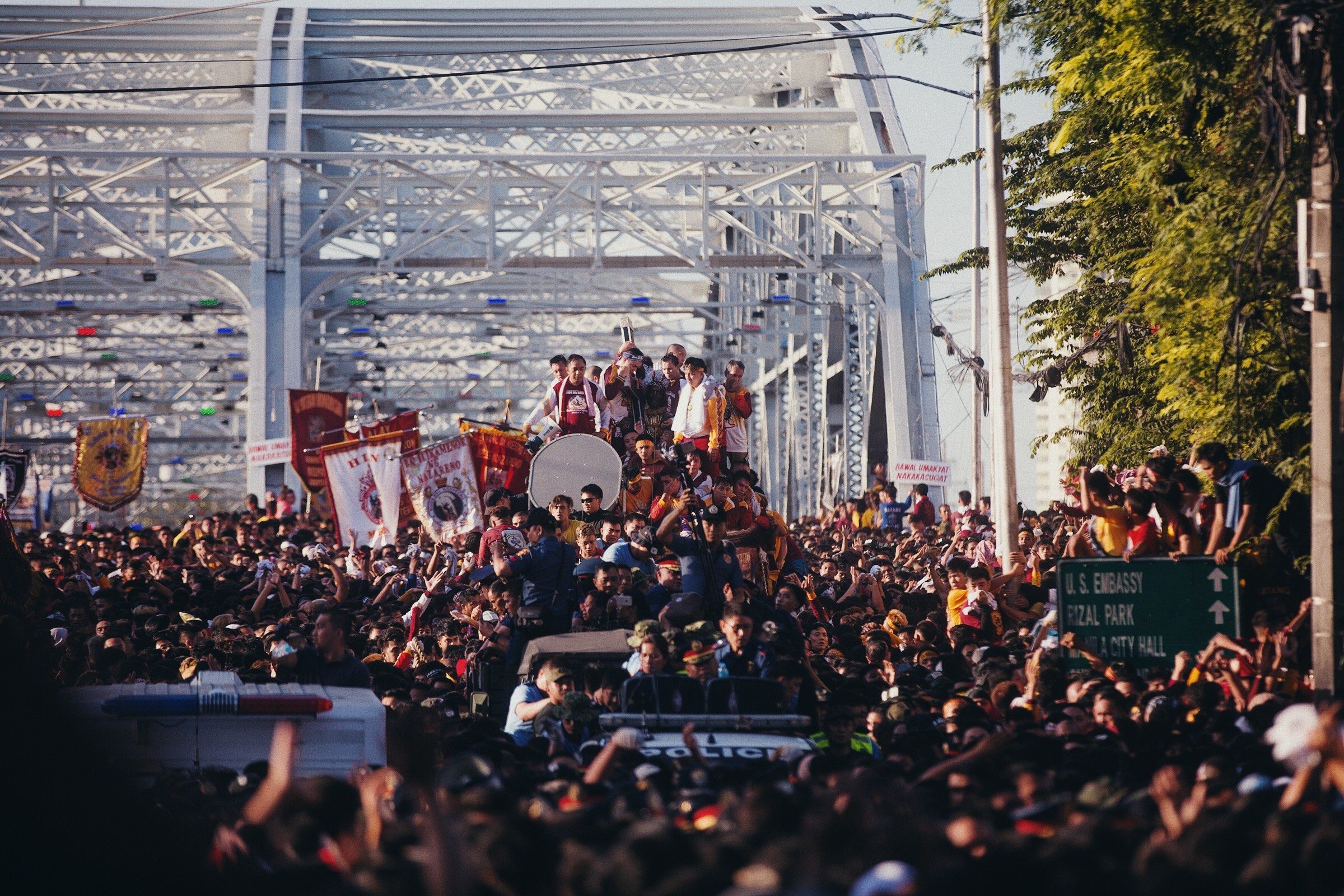 MANILA, Philippines (UPDATED) – The yearly Traslacion or grand procession of the Black Nazarene icon in Quiapo was off to an unprecedented quick start before dawn on Thursday, January 9, but devotees complained that a police barricade flanking the icon’s carriage deprived them of the chance to fulfill their yearly devotion.

Carried on the shoulders of its custodians, the Hijos de Nazareno, the icon left the Quirino Grandstand at the Luneta at past 4 am, more than an hour ahead of the announced schedule.

Awaiting the icon’s andas or carriage on the grandstand’s broad driveway was a formidable barricade of policemen, a plan by the National Capital Region Police Office (NCRPO) to hasten the procession that is known for its painstakingly slow pace owing to thousands of devotees jostling to get near the icon or pull the andas all at once.

The Hijos welcomed the police presence, taking it as a gesture of assistance, head procession organizer Alex Irasga told Rappler before the procession began. He said the Hijos would cooperate with the police’s plan.

The Traslacion did get going really quick as the Hijos were able to efficiently pull the andas thanks to the police, who kept the euphoric throng out of the way. It passed the Manila Hotel and crossed Roxas Boulevard in a matter of minutes – a feat that used to take at least an hour, usually even more.

The procession’s pace took devotees by surprise as the andas cruised along its path before they could take their positions along the barricade.

A row of policemen stood on either side of the procession’s path, each holding onto a rope. The devotees did not understand what the rope was for. If it was to keep them on the sidewalk, then it did not work.

Sinas on the megaphone

At around 5:30 am, Ayala Boulevard near the corner of Taft Avenue was beginning to fill with devotees anxious for their chance at getting on the fast-moving andas. NCRPO chief Brigadier General Debold Sinas trooped the ranks of the policemen holding onto the ropes, who were starting to get swarmed by the gathering devotees.

Sinas barked orders into a megaphone drowned out by hymns playing from the prayer station at the Philippine Normal University, and from the shouts of devotees calling out to their companions.

The andas apparently slowed down at Finance Road, such that the detail of police officers heading the procession had to walk back to where it was. Sinas led them, still blaring inaudible orders from his megaphone.

NCRPO chief Debold Sinas is at Ayala Blvd in front of the Philippine Normal University giving orders to police to hold the barricade line ahead of the passage of the Andas of the Black Nazarene here. Procession's going quite fast because of police control. | via @JCGotinga pic.twitter.com/lthCUJql6Y

When the image of the Black Nazarene turned up at the corner, euphoria seized the crowd and those outside the ropes began to jostle and shove.

Several hundred policemen surrounded the Hijos who were pulling the ropes of the andas – a position usually occupied by other devotees. Policemen also flanked either side of the andas, leaving only its trail for devotees to squeeze in to touch the carriage, get on it, or toss their towels to the Hijos atop it for a touch of the icon.

Jeroy Maige, a young but veteran devotee, said he and his companions liked that the procession was going quickly, but it made it more difficult for them to perform their rituals: the touch, the kiss, the ride on the andas.

It was also dangerous, he said: The ropes made it difficult to enter the throng, but it also made it harder to leave it. People about to faint couldn’t just get out, trapped inside by the police barricade.

Other devotees complained of being stepped on by the policemen in their combat boots. Participants of the Traslacion are supposed to be barefoot.

Still other devotees were kept completely out of the procession itself, left with no choice but to watch from the sidelines because they couldn’t force their way in.

She said the police were in the sweet spot near the Black Nazarene that should have belonged to devotees.

(They just caused chaos. They did not give it to the people who are devotees of Quiapo. That’s just once a year! They should have just given it to us. That doesn’t happen everyday anyway!)

Heeding the devotees’ complaints, the police handed down an order to disband the troops leading the procession, and turn it over to the Hijos once the procession makes it across Ayala Bridge.

The andas crossed the bridge hedged with barbed wire before 8 am, and was about to turn left at Palanca Street when the crowd of devotees began to jostle their way toward the procession. Several people fainted and were carried overhead as devotees, desperate for their chance with the Black Nazarene, threw their full weight at one another.

The procession was still underway as of this posting.

In Malacañang, Presidential Spokesperson Salvador Panelo defended the increased security that had kept many devotees from completing their annual ritual.

“It may be strict but the goal is to protect them from any harm,” Panelo said at a Palace news briefing, when asked about the devotees’ complaint.  – Rappler.com