Jan 10, 2020 12:16 AM PHT
Rambo Talabong
Facebook Twitter Copy URL
Copied
Brigadier General Nolasco Bathan, the chief of the Southern Police District, didn't like it that broadcast journalist Jun Veneracion captured on video how cops dragged a devotee to the ground 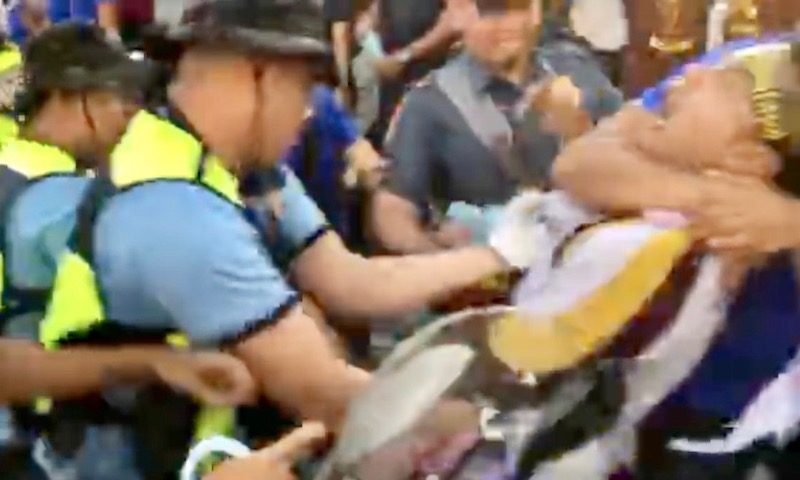 MANILA, Philippines – A Philippine National Police (PNP) general snatched the cellphone of GMA reporter Jun Veneracion as he was recording a tussle between cops and a devotee of the Black Nazarene during Traslacion on Thursday, January 9.

“While taking footage on my phone of a commotion between cops and a hapless Black Nazarene devotee on Ayala Bridge in Manila, a police general suddenly darted out of nowhere and snatched my mobile unit. He quickly moved away from the scene,” Veneracion said in a Facebook status posted an hour after the Traslacion ended in the evening.

In his video, Veneracion recorded a handful of cops surrounding and dragging a devotee to the ground. One of them was shown pushing the devotee and another one held the devotee in a chokehold and shoved him to the ground. That was when the video turned black – the reporter’s phone had been snatched.

As Veneracion was seeking to take his phone back, he said he was “accosted” by another policeman and prevented from approaching the official who got his phone. He, however, remembered that the policeman who snatched his phone had stars on his shoulders – an indication that he was a police general.

A few minutes later, he found the general again and confirmed his identity: Brigadier General Nolasco Bathan, the chief of the Southern Police District.

Veneracion is one of GMA’s veteran reporters, notable for his work in the West Philippine Sea. He is also a co-host of GMA’s news magazine show Reporter’s Notebook.

When Veneracion checked his phone for the video of the tussle, it couldn’t be found. Bathan denied deleting the video, but Veneracion was able to find it in his phone’s “recently deleted” folder.

He posted the video with his status, and at the end of the recording a voice could be heard saying “Burahin mo, burahin mo. Kuha ni Jun Veneracion. P*tangina nagku-kwan eh (Delete it, delete it! It’s Jun Veneracion’s video. Son of a bitch, he’s meddling.)

Rappler sought the comment of Bathan and PNP spokesman Brigadier General Bernard Banac. Neither of them has replied as of posting. – Rappler.com