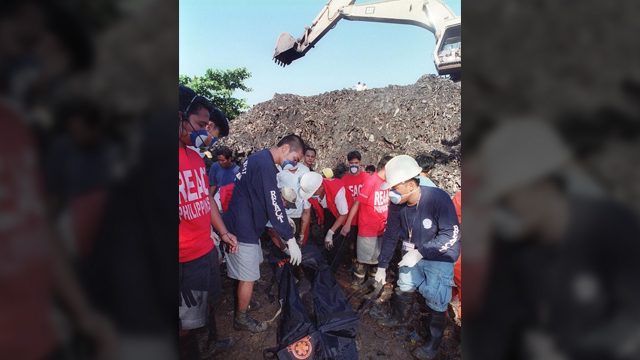 Facebook Twitter Copy URL
Copied
(UPDATED) The court awards P110,000 worth of damages to each of the 56 plaintiffs, relatives of those who died in the tragedy

MANILA, Philippines (UPDATED) – A Quezon City court has ordered the Quezon City government to pay P6 million in damages to 56 Payatas residents over the tragic dumpsite landslide that killed hundreds of people in 2000.

In a 133-page decision, the Quezon City Regional Trial Court Branch 97 ordered the Quezon City government to pay P50,000 in temperate damages, P50,000 in moral damages and P10,000 in exemplary damages to each of the 56 plaintiffs who are relatives of the victims.

The court also ordered the Quezon City government to pay the plaintiffs P100,000 in attorney’s fees.

“The mountain-like trash in itself is a testament of the city government’s gross negligence in the management and operation of the dumpsite,” Tamang said.

“The improper and irresponsible dumping of waste thereby creating a mountain-like pile of garbage is the proximate cause of the violent death of the victims and loss of personal and real properties,” the judge added.

The landslide in Payatas happened on July 10, 2000, when a wall of garbage buried 232 people alive.  Ismael Mathay Jr was Quezon City mayor at the time.

Tofemi and Meteor owned portions of the Payatas area, called Lupang Pangako (Land of Promise), which they leased to the Quezon City government for the dumpsite.

Ren Transport was the contractor that collected garbage that was brought daily to the dumpside.

“Witnesses for the plaintiffs all testified that during their stay in Lupang Pangako, the volume of wastes dumped in the area steadily rose to an unprecedented height forming a mountain of garbage which draw nearer to their dwellings,” the decision said.

The court relied on the legal principle of proximate cause, which was defined in past Supreme Court cases as a kind of negligence that produces an event “without which the event would not have occurred.”

Proximate cause is the same legal principle being used against former president Benigno  Aquino III over the Mamasapano tragedy.

The court agreed that it was the government’s negligence, and not the residents’ refusal to relocate, which was the proximate cause of the deaths.

“An examination of the records supports the conclusion that while the plaintiffs did not evacuate and seek for higher and safer place at the onset of the raging typhoons, the negligence of the City Government of Quezon City in failing to maintain an adequate and suitable facility for solid waste disposal, as well as in allowing the heaps of garbage to rise to such immense height, was the proximate cause of the loss of lives and properties,” the court said.

MMDA was cleared because “the plaintiff failed to prove by preponderance of evidence that MMDA exercised control, supervision and management of the Payatas open dumpsite.”

The court also ruled that land owners Tofemi and Meteor were limited to the role of just leasing the property to the local government.

“Merely allowing its lot to be used as dumpsite does not mean that it commanded, instigated, promoted or advised, countenanced, cooperated in, aided in or abetted the commission of the tort,” the court said.

The court cleared Ren Transport, saying that “the fact that they hauled garbage to the dumpsite does not necessarily mean that it enjoyed exclusive and uninterrupted use of the properties as garbage dumpsite as alleged in the complaint.”

Lawyers for the plaintiffs, the Public Interest Law Center (PILC), considered this a landmark case.

“The decision, if read meticulously and with laws such as the Ecological Solid Waste Management Act deeply associated with this tragedy, helps shape a template for local governments in averting and managing disasters,” the PILC said in a statement on Thursday. – Rappler.com