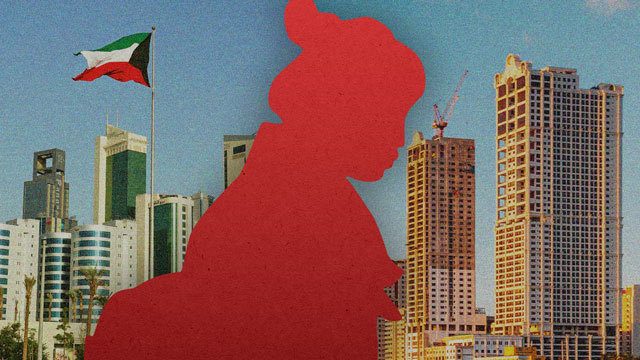 MANILA, Philippines – Malacañang on Friday, January 17, said President Rodrigo Duterte backed the labor department’s decision to impose a total deployment ban to Kuwait, saying it would only be lifted when the Gulf State implemented terms in an agreement signed by both countries in 2018.

“PRRD [President Rodrigo Roa Duterte] is for a total ban until the memorandum of agreement between the two countries is fully implemented and the terms contained therein are incorporated in every labor contract with our OFWs (overseas Filipino workers),” Presidential Spokesperson Salvador Panelo said in a statement.

What ban? On Wednesday, January 15, the Philippine government imposed a total deployment ban to Kuwait after a National Bureau of Investigation (NBI) autposy revealed Filipino worker Jeanelyn Villavende had been sexually abused and brutally beaten to death by her employers in Kuwait in December 2019.

An earlier autopsy by Kuwaiti authorities showed Villavende was beaten to death, purportedly in the hands of her employer. Nurses at a hospital in Kuwait at the time reported Villavende was “black and blue” when brought to their attention.

Malcañang hit the Kuwaiti government for what it viewed to be an “attempt to hide the said circumstance [of Villavende’s death] when it gave us a general autopsy report that the cause of death was trauma and bruises all over her body.”

Philippine authorities slammed Villavende’s death, describing it as a “clear violation” of the agreement signed by both Kuwait and the Philippines in 2018.

The agreement – which came at the end of a diplomatic crisis over the gruesome murder of OFW Joanna Demafelis – seeks to uphold the protection of the rights and welfare of Filipino workers in the Gulf state.

Around 248,000 Filipinos work in Kuwait, with more than half being female domestic workers. – Rappler.com