WATCH: ‘We will rise from the ashes’ 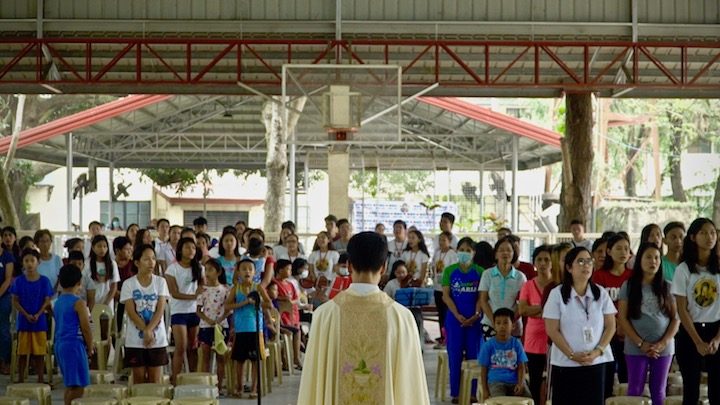 Facebook Twitter Copy URL
Copied
The Redemptorist Shrine in Lipa City is not your average evacuation center. Rappler’s Charles Salazar captures why in this video

BATANGAS, Philippines – The evacuees walked into the covered basketball court 10 minutes before 9 in the cool morning of Sunday, January 19. It was a week after the Taal Volcano began to erupt, displacing all of them.

They came as they were: wearing loose shirts that exposed their collarbones, and shorts that barely covered their knees. The mothers tended to the babies, and the fathers called the attention of children who chattered.

Each found a plastic monobloc to rest on as a choir and a string ensemble gathered behind the congregation. Then a volunteer planted a crucifix, barely 10-foot tall, before them. It was time to say Mass.

In the surrounding buildings, other evacuees had just woken up in their air-conditioned rooms. Some had begun assisting volunteers in cooking breakfast. More children ran beneath the halls’ arches.

Obviously, this is not the average evacuation center. This is the Redemptorist Shrine in Lipa City. Most, if not all, of its guests see it as the best evacuation site ever since the volcano became restive exactly a week ago on January 12.

Inside, evacuees are fed 5 times a day, energized by storytelling and zumba sessions, and are debriefed from trauma with prayer – a far different picture compared to the crowded evacuation sites in localities surrounding the volcano’s danger zone.