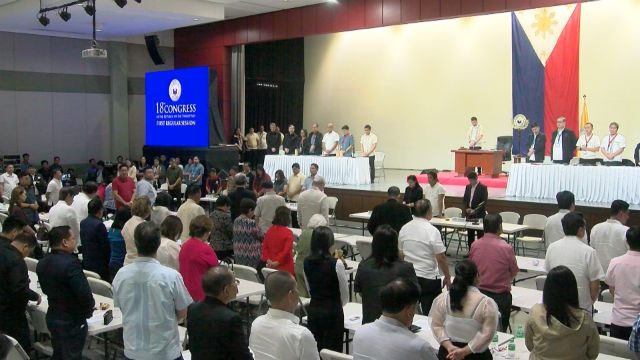 Facebook Twitter Copy URL
Copied
The House of Representatives holds its plenary session in Batangas City, which sits just outside the danger zone of the restive Taal Volcano

House Speaker Alan Peter Cayetano said lawmakers had to travel all the way to Batangas, where the restive Taal Volcano is located, so displaced residents would know the House is prioritizing responding to their needs. (READ: Cayetano defends House session in Batangas: It’s symbolic)

During the session, several evacuees and local officials appeal to legislators to help them rebuild their lives. (READ: Teary-eyed evacuees’ appeal: Allow us to fish in Taal Lake again)

I am wholeheartedly appealing to you all to please help us. We won’t be able to send our children to school if we are not able to fish.

MARA CEPEDA, REPORTING: Tears flow at the Batangas City Convention Center where the House of Representatives is holding its plenary session to directly listen to the stories of residents displaced by the Taal Volcano eruption in Batangas province.

Edwina Bilog had to flee her home in Barangay Alas-as in San Nicolas town when the volcano began erupting over a week ago.

Now, 11 towns are on total lockdown, and residents fear they would lose their primary source of income.

MARA CEPEDA, REPORTING: Captain Ramon Gamo of Barangay Pulang Bato says his people are also aching to once again fish for tilapia and tawilis in the lake  surrounding the restive volcano.

I hope you don’t prohibit us from fishing anymore because that’s our livelihood. And if in case you let us fish again, that would allow our barangay to rise up from the ashes much faster.

MARA CEPEDA, REPORTING: Across the villages affected by the volcanic eruption, residents are hoping the House would be able to secure the necessary funding needed not just to rebuild their homes and bring back their livelihood, but also to rescue the animals they left behind.

The mayor of Agoncillo town also says his people will need help in processing their trauma from the eruption.

DANIEL REYES, MAYOR OF AGONCILLO, BATANGAS: So now I ask with all humility, to allow me to take home to my people one thing: not an empty promise, but hope. Let me be a carrier of light, even a spark, but light nonetheless. We need medical and psychological intervention to help us cope with the situation we are now in.

MARA CEPEDA, REPORTING: For Speaker Alan Peter Cayetano, hearing these tragic stories directly from the displaced residents justifies the House’s move to hold a session in Batangas City, which sits just outside the danger zone.

Lawmakers drew flak for this, as it meant local officials – who are busy with ongoing relief efforts – had to find time to make logistical and security arrangements for their high-profile guests.

During the session, the House adopted two resolutions that support the swift release of the funds needed to help Taal recover, including the P30-billion supplemental budget that Batangas lawmakers are pushing.

If you’re asking me if we caused an inconvenience here, yes, a bit. We used their convention center and asked some of the officials to leave their evacuation centers. But I think the symbolism and compassion much, much outweigh everything else.

MARA CEPEDA, REPORTING: For now, the Speaker says he has instructed Majority Leader Martin Romualdez and other House leaders to craft a comprehensive action plan that would address all the evacuees’ needs.

But no timeline was given, leaving evacuees still groping in the dark as to when these promises will be fulfilled.

Cayetano insists it was necessary to hold the House plenary session here in Batangas to prove to evacuees that lawmakers care about them. But residents are asking for long-term aid like job security and psychological interventions to process trauma. Can the House deliver in the coming months?