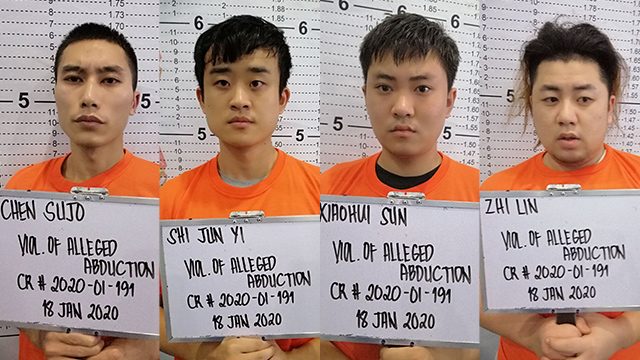 Facebook Twitter Copy URL
Copied
The Filipina says the men who tried to take her claimed that she owed them around P300,000

MANILA, Philippines – The 18-year-old Filipina who was almost abducted by 4 Chinese men in Makati City said the men who tried to take her claimed that she owed them around P300,000.

However, she belied the accusations of the foreigners and said that she never borrowed money from them.

(I don’t owe them anything. I’ve never borrowed money from them.)

On January 18, Saturday, the victim said she was nearly taken by 6 men, two of whom are Filipinos, on Einstein St. in Barangay San Isidro, Makati around 10 pm.

Police identified the arrested men as Wei Shi, 28; Su Chen, 26; Weilin Bei, 25; and Xiaohui Sun, 22. All are renting a condo in Pasay City. (READ: [ANALYSIS] Why the influx of Chinese in the Philippines?)

(The two Filipinos were the first to approach me while I was waiting for a taxi on the street. They were both in black t-shirts. One of them had a a cap on. The Chinese were waiting in a vehicle. The Filipinos took me by the arm and forced me to go with them.)

(But it was just my luck that a wake was ongoing where I was waiting for a taxi, so I shouted and asked for help from the people there.)

After that the men reportedly used more force, but she struggled away from them and hid inside her house, which was only few blocks away from where she was waiting for a taxi.

(I ran very fast. I was very scared. I locked the door to my house right away, then I called the barangay officials. But it turns out that the 4 had been caught even before I’d called.)

According to the victim, she knew two of the men as they had sought her help before, saying she referred them to her friend at the Bureau of Immigration.

(I just referred them to my friend at the Bureau of Immigration. I got to know them because I live with a Chinese.)

The Filipina said that she will pursue a forceful abduction case against them. (READ: Chinese abducting POGO workers ‘fairly common’ – Makati investigator)