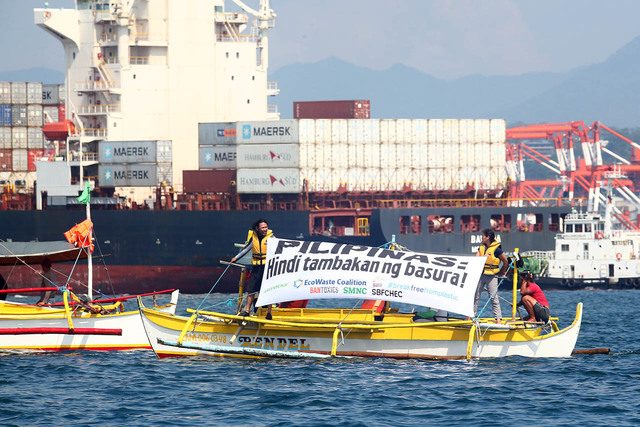 MANILA, Philippines – The National Bureau of Investigation (NBI) filed graft and environmental crime complaints against 4 officials each from the environment department and customs bureau for allowing the entry of 69 containers of trash from Canada in 2013.

The NBI’s Environmental Crime Division, with the approval of Director Dante Gierran, filed the complaints before the Department of Justice on Monday, January 20. Copies were released to media on Thursday, January 23.

The following officials face complaints for alleged violation of Section 42 (4) of the implementing rules and regulations of the Toxic Substances Act of 1990 and Section 3(a) of the anti-graft law:

Section 42 (4) of the Toxic Substances Act IRR punishes a person who “causes, aids or facilitates, directly or indirectly in the storage, importation or bringing into Philippine territory including its maritime economic zones, even in transit, either by means of land, air or sea transportation or otherwise keeping in storage any amount of hazardous and nuclear wastes in any part of the Philippines.”

Some of the containers carried plastic bottles, plastic bags, newspapers, household garbage, and used adult diapers, and were classified as hazardous under the Toxic Substances Act or Republic Act No. 6969.

The carrier of the trash, Chronic Plastics Incorporated, was issued import clearances “despite its failure to provide all the necessary information needed for the application of [its] import clearance,” according to the NBI.

The NBI said the EMB should be charged under the law for being “remiss in their duties to strictly examine the application, as to the completeness of the required documents.”

The BOC personnel, meanwhile, allegedly rerouted the containers to the green lane.

The NBI added that the BOC officials should have asked for more requirements.

The EMB and BOC officials also face complaints for allegedly violating Section 3(e) of the Anti-Graft and Corrupt Practices Act or Republic Act No. 3019, which punishes officials who “cause any undue injury to any party, including the government, or giving any private party any unwarranted benefits, advantage or preference in the discharge of his official administrative or judicial functions through manifest partiality, evident bad faith or gross inexcusable negligence.”

After 6 years of back-and-forth between the Philippine and Canadian governments, President Rodrigo Duterte compelled Canada to take back its trash.