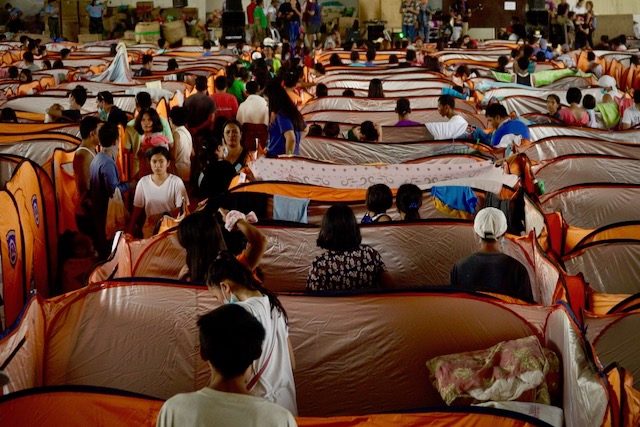 Facebook Twitter Copy URL
Copied
An unutilized housing project in Ibaan, Batangas, intended for police and military personnel is being considered as a relocation site for those affected by the Taal Volcano eruption

MANILA, Philippines – A ghost town initially intended for police and military personnel in Ibaan, Batangas, is being eyed as a potential relocation site for those displaced by the Taal Volcano eruption.

Human Settlements and Urban Development Secretary Eduardo del Rosario said in a media forum on Friday, January 24, that the government is already setting up the necessary infrastructure to provide water and electricity to the village initially intended for personnel of the Philippine National Police and the Armed Forces of the Philippines.

Why is it unoccupied? Batangas Governor Hermilando Mandanas previously said that the housing project with 1,200 units was never used due to some “legal issues,” but various agencies have reached an agreement to temporarily utilize it as shelters for evacuees.

Del Rosario added that soldiers likely did not avail of the houses due to its small size. At 22 square meters, he said that soldiers are able to afford bigger units that are closer to Camp Aguinaldo.

(For example, I’m a soldier, amortization is only P200 a month but I have more money to spend and the location is far, why will I live there?)

Is it accessible? Ibaan, Batangas, is far from the identified danger zone, making it an ideal place to relocate, according to Del Rosario.

Del Rosario said that the village is accessible but not fit for police and military personnel because it is too far from their respective camps. He said the village may be a better fit for those displaced by the volcano’s eruption.

He added that interested residents have the option to live there temporarily or permanently. (READ: Taal Volcano’s 2020 eruption: What we know so far)

Del Rosario assured potential residents that the units there are robust. They are also checking the structural integrity of the units. – Rappler.com