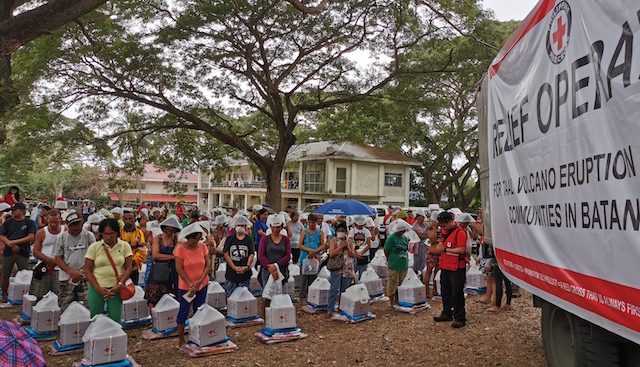 Facebook Twitter Copy URL
Copied
'In a situation like this, even if we're resilient, we will need the help of our countrymen because recovery can't happen quickly. It will take time,' says Leonardo Ebajo, Philippine Red Cross Director for Disaster Management Service

“Who could have expected that 13 towns would be empty now?  I don’t think any province would be ready to react immediately to this,” Philippine Red Cross (PRC) Batangas Board Member Bernard Mayo said in a press conference Friday afternoon, January 24,

“But rest assured that Batangas has one of the best Red Cross chapters, strong, and we will rise to the occasion,” Mayo assured communities affected by the ongoing volcanic eruption.

Leonardo Ebajo, PRC Director for Disaster Management Service, said that while Filipinos are resilient, people affected by the Taal eruption need all the help they can get. (LIST: Relief proposals for Taal Volcano evacuees)

“In a situation like this, even if we’re resilient,  we will need the help of our countrymen because recovery can’t happen quickly.  It will take time,” Ebajo said in a mix of Filipino and English.

Ebajo also shared the vision of the PRC chairman, Senator Richard Gordon, to activate RedCross 143 in every barangay.

He cited the importance of having a volunteer in every barangay “who can immediately text to us anything happening in their barangays.”

“Information like evacuations, accidents, emergency cases, and even the availability of blood typing can easily be assessed,” Ebajo said.

Meanwhile, over 800 Red Cross personnel had been mobilized to assist in the Taal operations.

Ebajo said while they have volunteers numbering in the thousands, these people have to go on shifts to make sure they get to rest.

Ronald Generoso, Batangas Redcross Chapter Administrator said that they only have 39 staff covering the whole province of Batangas, divided into 4 groups: one each in Nasugbu for the 1st District, Batangas City for the 2nd District, Tanauan City for the 3rd District and Lipa City for the 4th  District.

He added that they were able to react immediately because their staff members were well in place.

The officials assured the public that they would do everything they could to help, not just during the relief operations, but more importantly during the rehabilitation. – Rappler.com